The staff of the United States consulate in Chengdu are making final efforts to clear the premises as security remains tight outside in the face of Monday’s closure ordered by Beijing as China-US relations continue to worsen.

Three moving trucks entered the US consulate as onlookers shared sidewalk space with dozens of uniformed and plain-clothes police on a tree-lined street on a hot Sunday.

The capital of Sichuan province, along with Houston in Texas, has found itself in the limelight of international politics as China and the US exchanged tit-for-tat orders last week to close each other’s consulates in the two heartland cities.

The closures have escalated a sharp deterioration in ties between the world’s two biggest economies, which were already their worst in decades amid disputes over trade and technology, the COVID-19 pandemic, China’s territorial claims in the South China Sea and its clampdown on Hong Kong.

Police asked people to move on when crowds formed outside the consulate, as onlookers took photos and videos of what they expected would be the last time to see the compound in the US hands.

The street was closed to traffic, except for consular or police vehicles let through by police.

China on Friday ordered the closure of the Chengdu consulate in the southwestern province of Sichuan. That means an evacuation deadline of 10am (02:00 GMT) on Monday, according to the editor of a state-run tabloid.

Beijing’s move was in retaliation for the US order to close the Chinese consulate in Houston, alleging the site hosted spies who tried to steal data from facilities in Texas, including the Texas A&M medical system and The University of Texas MD Anderson Cancer Center in the city.

In Houston on Friday, a group of men accompanied by a US State Department official were seen forcing open a door at the Chinese consulate, shortly after Secretary of State Mike Pompeo called it “a hub of spying and intellectual property theft”.

In Chengdu, a coach that had been on the US consulate premises left on Sunday morning. It was unclear who or what was inside.

“China’s response was reciprocal,” said a 63-year-old local resident who gave only his surname, Yang, who called the situation “quite regrettable”. 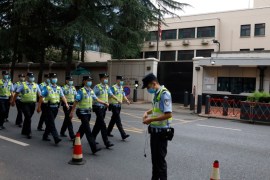 Security tight after China orders US consulate in Chengdu to shut

The closure is in response to US shuttering of Chinese consulate in Houston as relations continue to deteriorate. 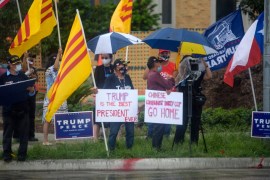 Group of men thought to be US officials break open door and enter China’s consulate in Houston after staff depart.