In a move that caused a ripple effect across the Middle East, Iranian General Qassem Soleimani was killed in a US drone strike near Baghdad’s international airport on January 3. On that day, the Pentagon announced the attack was carried out “at the direction of the president”.

In a new report examining the legality of armed drones and the Soleimani killing in particular, Agnes Callamard, UN special rapporteur on extrajudicial and arbitrary killings, said the US raid that killed Soleimani was “unlawful”.

Callamard presented her report at the Human Rights Council in Geneva on Thursday. The United States, which is not a member after quitting the council in 2018, rejected the report saying it gave “a pass to terrorists”.

In Callamard’s view, the consequences of targeted killings by armed drones have been neglected by states. Her report said the world is at a “critical time and a possible tipping point” when it comes the use of unmanned aerial vehicles.

A “second drone age” has now emerged, she wrote, with states employing ever more advanced technology.

One of the greatest concerns with the increased use of armed drones noted in the report is the number of civilian casualties it causes. The attack on Soleimani, for example, resulted in far more casualties than the direct targets.

Soleimani was killed along with eight others including Abu Mahdi al-Muhandis, the deputy head of Iraq’s Popular Mobilisation Forces.

Speaking to Al Jazeera, Callamard said: “The international community must now take stock of the evolution, expansion and escalation” of drone use.

She noted the killing of Soleimani was the first case of a drone attack against a representative of the armed forces of a state. It was also the first known incident in which a nation invoked “self-defence” as a justification for an attack against a state actor in the territory of a third country.

Previous UN special rapporteurs on extrajudicial killings have lamented the lack of clarity among states about their obligations regarding drone warfare and the absence of accountability.

Experts agree drones are not necessarily illegal, but it remains unclear under which circumstances their use violates international law.

Callamard said under international law, killings by drone could be justified in certain circumstances – most importantly in the case of self-defence.

The criteria of imminent threat are crucial in determining whether the US acted in self-defence, she noted.

Under Article 51 of the UN Charter, the use of deadly force is allowed in two scenarios: When it is authorised by the UN Security Council (UNSC) and when a country acts in self-defence.

Callamard has emphasised the test for “anticipatory self-defence” is very narrow: It must be a necessity that is “instant, overwhelming, and leaving no choice of means and no moment of deliberation”. This standard, she stated in a tweet issued right after Soleimani’s killing, “is unlikely to be met”.

Washington had accused Soleimani of masterminding attacks by Iranian-aligned fighters on US forces in the region.

“No evidence has been provided that General Soleimani specifically was planning an imminent attack against US interests, particularly in Iraq, for which immediate action was necessary and would have been justified,” Callamard said.

According to Kevin Jon Heller, professor of international law at the University of Copenhagen, “the legality of an attack depends on the immediacy of the threat that it aims to avert”.

Wim Zwijnenburg – humanitarian disarmament project leader for the Dutch peace organisation PAX – told Al Jazeera: “Mr Soleimani should have been held accountable for his crimes and the right course of action would have been to present clear evidence, arrest him and put him in front of a court.”

Rachel van Landingham, a retired lieutenant colonel in the US military, said: “Callamard is judging this drone strike based almost purely on the effects caused by the strikes and not factoring in the data sets – the facts – that commanders who ordered such strikes considered at the time they ordered the strike.

“To make a rigorous legal assessment of the drone strike, one needs to know what the decision-makers were considering as ‘imminent’. And here the US isn’t fully sharing such information, hence she cannot make a supportable characterisation based on the facts she does have,” van Landingham told Al Jazeera.

But, she added: “The US embarrassingly bungled its public justification for this attack and hence lost soft power, degraded US legitimacy, and thereby weakened US national security, even if the attack was ultimately justified by the facts.”

Callamard’s report calls for greater accountability for targeted killings, as well as greater regulation of the weapons used.

Heller said the US incurred state responsibility for the strike because it violated “jus ad bellum”, the law pertaining to the conditions under which states may resort to war.

“The US should apologise, promise not to launch further unlawful strikes, and likely provide Iran with some kind of compensation. But of course it won’t,” said Heller.

In June, Iran issued an arrest warrant for US President Donald Trump and others for their role in the killing of Soleimani and the other victims of the attack.

“The right legal course of action to hold people suspected of serious war crimes, like Mr Soleimani, accountable for their actions would be arresting them and putting them in front of a court and serve justice to his victims,” Zwijnenburg said.

Callamard also called on states to robustly investigate allegations of harm to civilians during such attacks and to release their findings.

“The planning for each operation for using drones for targeted killing must ensure in advance that each of the relevant bodies of law are examined, both international humanitarian law and human rights law,” Dapo Akande, a professor at Oxford University, told Al Jazeera.

“And every country that engages in such operations should have a system that reviews each operation after the fact to check that the rules of international law have been complied with.” 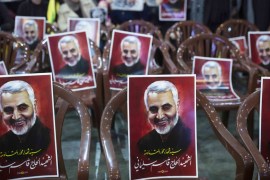 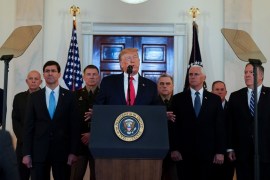 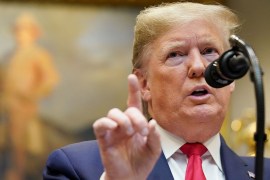 Soleimani and the weight of history

Soleimani is the product of the same historical events that have curbed popular sovereignty and democracy in the region.