Allies of Philippine President Rodrigo Duterte in the House of Representatives voted on Friday to deny the renewal of ABS-CBN’s broadcast franchise, affirming a government order to shut down the country’s largest television network in a move critics say is a major blow to press freedom in the Southeast Asian nation.

Congress members voted against giving the company another 25-year licence to operate after a total of 12 public hearings and testimony establishing the channel had violated no legal provisions.

Of the 85 committee members in charge of the renewal, 70 voted to deny, 11 voted for the renewal, two voted to inhibit and one abstained from voting.

In a last-minute move, at least two sponsors of the legislation pushing for the renewal withdrew their support.

Ahead of the vote, Carlos Zarate, a minority House member, made a last-minute plea for approval saying, “Why would we punish a company that did not breach our laws?”

But Rodante Marcoleta, a majority member of the House and one of the channel’s fiercest critics, said regardless of the legal argument in favour of ABS-CBN, “it is the will of Congress that should be accorded due respect”, whether they vote for or against.

In the same session, Alan Peter Cayetano, Duterte’s handpicked House Speaker, hinted about the outcome of the vote, arguing that it was “not press freedom” that was at stake. He said it was a question of the media protecting its own business interests.

Cayetano, who was Duterte’s vice presidential running mate in 2016, had also accused ABS-CBN of “biased” reporting. The president and vice president are elected separately in the Philippines. Cayetano lost in that race.

At the final hearing on Monday, ABS-CBN News and current affairs chief Ging Reyes defended the channel’s news reporting standards, which have been attacked by the president’s allies.

Reyes also spoke about how the closure had denied millions of Filipinos access to information.

“The shutdown has deprived more than 69 million Filipinos of the kind of information, analysis and commentary, and public service provided by ABS-CBN News. It has cut off our reach such that two out of three viewers are unable to watch our news programmes,” Reyes said.

After the vote on Friday, Reyes said that she does not believe that it is the end of the road for the network.

ABS-CBN was ordered to shut on May 5 by the country’s regulator, the National Telecommunication Commission, which is part of President Duterte’s office, a day after the channel’s 25-year franchise expired. The franchise does not cover its digital presence, its cable channel, ANC, and its global affiliate, The Filipino Channel.

But with the closure order, thousands of ABS-CBN employees could lose their jobs. According to ABS-CBN, it has a total of 11,000 permanent and freelance contract workers.

In a statement to Al Jazeera on Friday, the National Union of Journalists of the Philippines (NUJP) denounced the House of Representatives saying “it has declared itself enemy of democracy”.

“Today, this chamber has lost all claim to represent the people and our interests,” NUJP said.

David Dizon, senior editor of ABS-CBN news website, told Al Jazeera that he was “gutted” by the decision of Congress, adding that in all his 20 years of working for the company, he knows that it “has always strive to pursue excellence in reporting – accurate, fair, and balanced.”

“It has been a long and hard journey for ABS-CBN and to see the committee vote go that way is disheartening.”

Images posted on social media showed staff of ABS-CBN in tears after the vote was announced.

A government that shuts down the press is afraid and threatened. Afraid that the truth will be revealed, critical minds will question their abuse of power and an informed citizenry will take that power away.

They are afraid of the people, and rightfully so. #DefendPressFreedom

Duterte has long harboured enmity towards the station, accusing it of playing favourites after refusing to run some of his political advertisements during the 2016 presidential campaign. ABS-CBN has denied the allegations, saying that only a few advertisements did not air, because the slots were already taken by other commercials.

After his election, Duterte repeatedly threatened the company with closure, declaring in 2019, “I will see to it that you are out.”

Altermidya, an alternative news organisation, said in a statement that “it is clear” that the channel “is being punished for reporting and commenting on issues in a manner unacceptable to the Duterte administration.”

On social media, Danilo Arao, a journalism professor at the University of the Philippines, added that the marching order to deny the channel a franchise came straight from the office of the president.

ABS-CBN’s coverage of the war on drugs, which has killed thousands of people, also riled the Philippine president. The network is not the first media company to have earned Duterte’s ire.

His administration continues to pursue cases against the news website, Rappler, and its editor, Maria Ressa, after its extensive reporting on his war on drugs and his administration’s role in spreading fake news.

The country’s largest newspaper, the Philippine Daily Inquirer, was also forced to sell to an ally of the president, billionaire Ramon Ang, after Duterte threatened its owners with legal consequences. The newspaper was also critical of the drug war. In the run-up to the 2016 elections, it also reported about Duterte’s alleged hidden wealth.

It is not the first time that ABS-CBN has been forced to shut by the government. In 1972, then-President Ferdinand Marcos ordered the shutdown of the network after he declared martial law.

ABS-CBN was only returned to its owner in 1986, after Marcos was overthrown in a popular revolt. 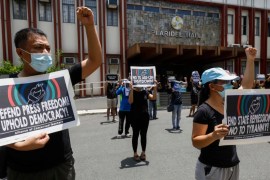 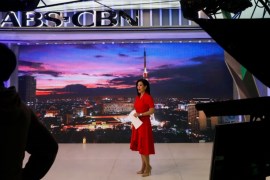 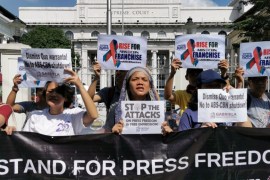