Left to starve for months at sea, Rohingya children who escaped Bangladesh’s refugee camps took “desperate” journeys to reach Malaysia on flimsy smuggling boats, according to a new report released as it emerged Malaysian authorities had detained nearly 300 Rohingya trying to reach the country by sea.

Testimonies by refugee children, who were rescued from a boat found adrift in the Bay of Bengal in April, revealed how they were beaten and forced to watch their parents’ bodies thrown overboard.

“It is clear that Rohingya families are still so desperate that they are ready to make dangerous journeys, often at the mercy of criminal organisations,” Hassan Saadi Noor, Asia Regional Director of Save the Children, which compiled the report, said in a statement.

Hassan is urging countries across the region “to share the responsibility” of both protecting and providing for the Rohingya, while also working with Myanmar to find a long-term solution to this crisis.

“As long as Rohingya do not see a future for themselves, families will continue to make dangerous journeys and put themselves in harm’s way in search of a better life,” Hassan said.

Malaysian authorities on Monday said they detained 269 Rohingya who were found on a damaged boat off the northwestern holiday island of Langkawi.

Acting on a tip-off received a day earlier, they intercepted the ship just before dawn.

“An inspection of their boat found 216 Rohingya migrants and the body of one female illegal immigrant. Further inspections found that the boat was deliberately damaged… making it unfit to be turned back,” Malaysia’s National Task Force on border patrol said in a statement.

Before the boat was intercepted, more than 50 of the people on board had jumped into the sea in what officials said was an attempt to evade arrest. They were detained by the Malaysian coastguard once they reached shore.

Kasit Piromya, a board member of Asean Parliamentarians for Human Rights and former Thai foreign minister, urged Malaysia to do more to help those it had detained.

“The Rohingya who were on that boat are not criminals, but asylum seekers in need of safety and protection,” Kasit said in a statement. “Malaysia’s systematic detention of migrants and refugees is shameful and illegal. Authorities must immediately work with UNHCR to provide them with food, water, shelter, appropriate health screening and care. Last but not least, they must be granted access to fair asylum procedures.”

Like many countries in Southeast Asia, Malaysia is not a signatory to the UN convention on refugees, and regards refugees as “illegal” migrants. The new government that has also adopted a harder line on migration, stepping up patrols at the border and arresting undocumented migrants as part of its attempts to curb the spread of the coronavirus.

‘I never thought I would survive’

Among those who were rescued in April and told their story to Save the Children was a 16-year-old boy identified by the pseudonym Aziz.

Aziz told Save the Children he was out at sea for almost two months. After the boat he was on was turned away for a third time by Malaysia because of coronavirus restrictions, they ran out of food and water.

“All the food we had was finished. We were starving for days,” he was quoted as saying. “We had no water to drink. Some people drank water from the sea. They got sick later.”

“I saw a man dying, and the broker threw the body into the sea. The broker beat us when we asked him to turn around and go back to Bangladesh. I never thought I would survive.”

Another Rohingya child, 8-year-old Sara (not her real name), recalled trying to get to Malaysia by boat with her mother and 9-year-old brother.

Sara’s mother, however, died on the boat, and she and her brother watched in horror as their mother’s body was thrown into the sea.

The vessel was returned to Bangladesh and Sara and her brother are now being looked after by their grandparents in a Cox’s Bazar camp.

Another teenager told the NGO that during the same journey, at least 80 people died of hunger and drinking seawater.

APHR’s Kasit said countries in the region should work together to try and ease the plight of the Rohingya. All are part of the ten member Association of Southeast Asian Nations, or ASEAN.

“Ultimately what needs to happen is for ASEAN to finally come together and collectively search and rescue boats in danger at sea, and pressure Myanmar to end its persecution of the Rohingya,” he said. 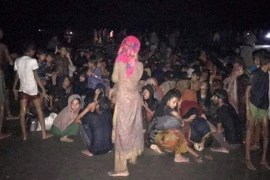 Refugees rescued in early May floating adrift in the Bay of Bengal are held at an island prone to deadly monsoon. 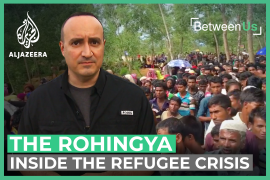 Rohingya Refugees: Inside the Crisis

‘No other story has had as much of an impact on me as this one has.’ 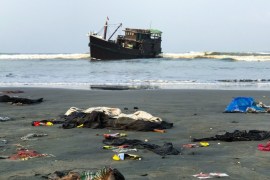