Tens of thousands of people protested across Australia in support of the Black Lives Matter movement while also addressing the deaths of Indigenous Australians in custody or at the hands of the police.

In Melbourne, thousands gathered peacefully on Saturday to listen to speeches from Indigenous Australians who had family members killed.

Gathering in front of the state’s Parliament House, protesters sang in Indigenous language, with thousands tapping their chest in accompaniment. Protesters held placards, with chants of “Black lives matter” and “always was, always will be Aboriginal land”.

Like protesters in the United States and around the world, people chanted “I can’t breathe”.

These are the words uttered by African American George Floyd as a Minnesota police officer kneeled on his neck, leading to his death.

They are also the words spoken 12 times to prison officers by Indigenous Australian man David Dungay Jr in 2016 as he was restrained and forcibly sedated in his cell.

Dungay subsequently died, yet none of the five prison officers has been convicted so far.

Around one Indigenous Australian has died in custody or at the hands of the police every month since a landmark Royal Commission was conducted on the issue in 1991, making a total of 432 deaths since.

‘A lot of fear and anger’

Justin Grant, a speaker at the rally, told Al Jazeera about his relative, 19-year-old Kumanjayi Walker, who was shot dead by police last year in the small community of Yuendemu.

“There was a lot of fear and anger [in the community] about what happened,” he said.

The police officer involved has been charged with murder, but is yet to stand trial.

Grant said an ongoing issue was the poor historical relationship between Indigenous Australians and the police.

“[The police] are breaking our trust and scaring our people … they [don’t] respect our culture, our laws or our practices.”

Belinda Day’s mother, Tanya Day, died after sustaining head injuries while locked in a cell on the charge of public drunkenness.

Belinda told Al Jazeera on Friday that prison officers should have taken better care of her mother. She added that racism was a factor in the arrest and subsequent treatment of her mother.

Her uncle also died in custody, and she said that to have two family members lose their lives in the same way was “very distressing”.

“Mum now has grandchildren that have a fear of the police. And that level of fear gets passed on through the generations,” she said, adding that while it was good the issue of Indigenous deaths in custody was getting attention, it was a shame that it was occurring due to the Black Lives Matter movement in the US.

“It’s just really frustrating that we need to wait for something to happen internationally so that we can get Australians on board and understand what’s happening here.

“It’s time for change. And that time is now. We need the support of all Australians to stand with us and say ‘enough is enough’. How many more Aboriginal people need to lose their lives in this manner before we make change?”

Larry Walsh, an elder in the Melbourne Indigenous community, told Al Jazeera he began advocating for the implementation of the 1991 Royal Commission after his uncle died in custody.

Since then, he said, the situation “hasn’t changed, it’s just gotten worse”.

Walsh said it was important for people to come together to support the families of Indigenous Australians who lost family members due to deaths in custody, and also to show support for the Black Lives Matter movement in the US.

“It’s important that we support our brothers and sisters in America who are needlessly killed like our people are,” he said. “And the only way we are going to get change is if we work together in solidarity.”

Protests were also held in large cities across Australia, including in Sydney, where, despite an attempt by the state government to have it declared illegal, the Supreme Court ruled it could still go ahead. 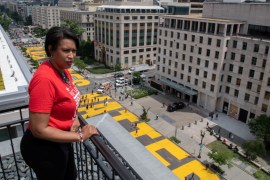 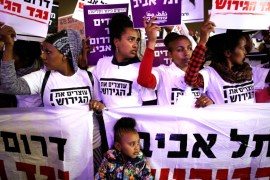 Black lives do not matter in Israel 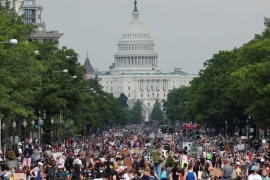 DC rallies for George Floyd: ‘Our system is unjust’

Throngs converge on Washington, DC in largest protest yet after the death of George Floyd in police custody 12 days ago.