US President Donald Trump says he has authorised the government to arrest anyone caught trying to tear down monuments or statues, threatening they could be jailed for 10 years.

Trump said on Tuesday the new order applies “retroactively” so those who previously participated in bringing down memorials could be arrested.

“I have authorised the federal government to arrest anyone who vandalises or destroys any monument, statue or other such federal property in the US with up to 10 years in prison, per the Veteran’s Memorial Preservation Act,” the president wrote on Twitter.

Commenting as he departed the White House for a trip to Arizona on Tuesday, Trump reiterated his threat and said, “I will have an executive order very shortly, and all it’s really going to do is reinforce what’s already there, but in a more uniform way.”

The federal statute Trump referred to subjects anyone who willfully injures or destroys, or attempts to injure or destroy, any structure, plaque, statue or other monument on public property commemorating the service of any person or persons in the armed forces of the US to fines, up to 10 years imprisonment, or both.

A wave of nationwide rallies calling for racial justice has swept across the United States since May 25 when George Floyd, a 46-year-old Black man, was killed by a white police officer in Minneapolis, Minnesota.

Since then, monuments from the civil war era or associated with slavery and the colonisation of Native Americans by Europeans have been targeted for destruction.

…..This action is taken effective immediately, but may also be used retroactively for destruction or vandalism already caused. There will be no exceptions!

Trump’s order on Tuesday follows a statement by Republican Senator Tom Cotton, from the state of Arkansas, who demanded the federal government take action against the pulling down of statues of historical American figures.

“Violent mobs have, in recent weeks, defaced and torn down statues, memorials, and monuments around our country,” Cotton said in a letter to Attorney General William Barr.

“These criminals masquerade as protesters exercising their lawful right to peaceably assemble, but there can be no right to destroy public or private property.”

Cotton has taken a hard line against the anti-racism demonstrations that have gripped the US after the police killings of Floyd and Rayshard Brooks in Atlanta.

Speaking on the floor of the US Senate on Tuesday, Majority Leader Mitch McConnell echoed the sentiments expressed by both Trump and Cotton.

“Americans know an imperfect nation built by imperfect heroes is still the most perfect Union the world has ever seen,” he said. “And when the dust settles, it is never the mobs or bullies whom we honor. It is the brave leaders who confront them.”

Trump has threatened to deploy the US military on the streets – a move widely condemned by rights activists, politicians, and even US military leaders.

On Monday night, protesters tried to pull down a statue of former US President Andrew Jackson near the White House before being dispersed by police with pepper-spray at Lafayette Square, where the Jackson statue is located.

Videos posted on social media showed demonstrators climbing on the statue, tying ropes around it, then unsuccessfully trying to pull it off its pedestal.

Trump tweeted late on Monday that “numerous people” had been arrested for “the disgraceful vandalism”.

The statue shows Jackson in a military uniform, riding a horse that is rearing on its hind legs. The 19th-century president’s ruthless treatment of Native Americans has made his statue a target of demonstrators protesting the US’s legacy of racial injustice.

Interior Secretary David Bernhardt was at the scene on Monday and issued a statement.

“Let me be clear: we will not bow to anarchists. Law and order will prevail, and justice will be served,” said Bernhardt.

On June 1, law enforcement officers forcefully cleared peaceful protesters from Lafayette Square so Trump could stage a photo opportunity at a nearby church. 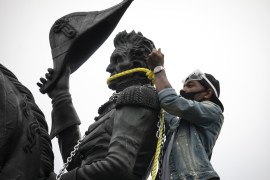 In Pictures: Anti-racism protesters pepper-sprayed in the US

Police disperse protesters who tried to pull down the statue of former US President Andrew Jackson near the White House. 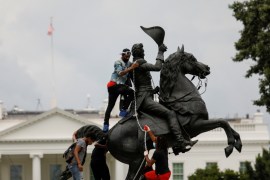 Police use pepper spray to push back hundreds of protesters trying to topple statue of Andrew Jackson near White House. 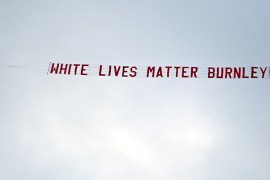 Banner condemned by Burnley football club, which vowed to identify those responsible and issue lifetime bans.