The escalation in fighting between Myanmar’s military and ethnic Rakhine rebels in recent months has triggered a surge in violence against children and left some villagers facing starvation.

The humanitarian group, Save the Children, said in a report on Tuesday that the conflict in the far west of Myanmar has left children increasingly exposed.

“The widespread use of mines and improvised explosive devices poses a specific threat to children,” Duncan Harvey, Save the Children’s top official in Myanmar, said in a statement.

“The numbers paint a stark picture,” Harvey said, pointing to the report, which verified dozens of incidents of children being killed or maimed.

Between January and March this year in the central part of Rakhine State alone, 18 children were killed and 71 children were physically injured or maimed, according to the report. In comparison, there were three recorded cases of children being killed and 12 others injured between October-December 2019.

Killing, maiming as well are extortion are the top three abuses affecting children in central Rakhine, the report said, noting that the real number of casualties could be higher because of “severe under-reporting” and the restrictions placed by the military on independent observers.

Rakhine is also home to tens of thousands of mostly Muslim Rohingya, many of whom were forced to flee to Bangladesh after a brutal military crackdown in 2017.

John Quinley III, Senior Human Rights Specialist at Fortify Rights that monitors the welfare of Rohingya, told Al Jazeera that in recent months, there have also been instances that Rohingya communities were caught in crossfires between the military and the Arakan rebels.

He also noted that the deadly landmines and other explosive ordinances laid on the ground both by the military and rebels in conflict zones do not discriminate who it could kill, including women and children.

Save the Children’s report mirrors an earlier report by the UN which recorded at least 432 incidents of “grave violations against children” in recent months, including the killing of at least 41 children and maiming of 120 others, some as young as six months old.

The UN had also reported 12 attacks against schools, and the abduction of 12 children by non-state armed actors. Previously, the UN had accused Myanmar’s military of recruiting child soldiers, as well as employing child labourers to carry bricks and harvest rice at their barracks.

The report described as “shocking” the decision of UN Secretary-General Antonio Guterres to delist Myanmar’s military for “grave violations” of recruitment and use of children, and called for an independent assessment on the decision.

The UN is expected to debate the issue in New York later on Tuesday.

“We cannot forget the children of Myanmar who continue to face daily risks to their safety, health and wellbeing,” Save the Children’s Harvey said.

“The only way forward is for all parties to the conflict to stop the killing and maiming of civilians, commit to a ceasefire and take all necessary steps to hold the perpetrators of grave violations accountable for their crimes.”

Quinley III of Fortify Rights also appealed to the Myanmar military to talk to the rebels.

“The Arakan Army has political aims, not just military aims, so the Myanmar military should be able to meet them at the table, and they should be able to discuss together and end this ongoing conflict,” Quinley said, while urging the military to immediately stop the stockpiling and the laying down of deadly landmines.

Meanwhile, the Chin Human Rights Organization (CHRO), which monitors the conflict in Rakhine and Chin states, says that more than 12,000 displaced civilians are facing starvation due to the blockade imposed by the military.

The group said the Tatmadaw is concerned that the food items heading towards the region will end up in the hands of the rebels.

In Ann Township in Rakhine, at least 42 villages with an estimated population of 12,139 are facing food shortages due to an ongoing blockade imposed since the beginning of this year.

CHRO is appealing for “systematic relief and response team” to address the impending crisis, pleading with the government to give them special access to the villages caught in the conflict. 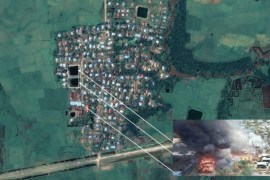 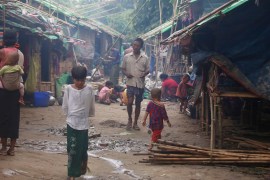 Locals and campaigners appeal for an end to the blackout as coronavirus fears grip the region.