After Libya’s renegade military commander Khalifa Haftar failed to seize Tripoli following a 14-month military campaign, his foreign backers are repositioning themselves on the battlefield for maximum leverage, analysts say.

In the past month, the UN-recognised Government of National Accord (GNA) recaptured strategic locations including the al-Watiya airbase and Tarhuna, Haftar’s last major stronghold in western Libya, which had been used to help launch an offensive against the capital.

Haftar’s Libyan National Army (LNA) has since been pushed back from Tripoli and has withdrawn to Sirte, 450km (280 miles) east of Tripoli, and the al-Jufra airbase in central Libya.

Following a series of victories with the help of Turkey, the GNA now controls much of western Libya.

Forces loyal to the Tripoli-based government have launched an offensive now to capture the coastal city of Sirte, located close to major energy export terminals.

Libya, home to the richest proven crude reserves in Africa, has been mired in conflict since the 2011 civil war that saw the overthrow and killing of longtime leader Muammar Gaddafi.

The country is now divided into two administrations: Libyan Prime Minister Fayez al-Sarraj’s GNA based in Tripoli, and the House of Representatives allied with Haftar, who controls the oil-producing regions of eastern and central Libya.

Over the years the conflict has spiralled into a major proxy war, with the United Arab Emirates (UAE), France, Russia and Egypt backing Haftar, while Turkey supports al-Sarraj. 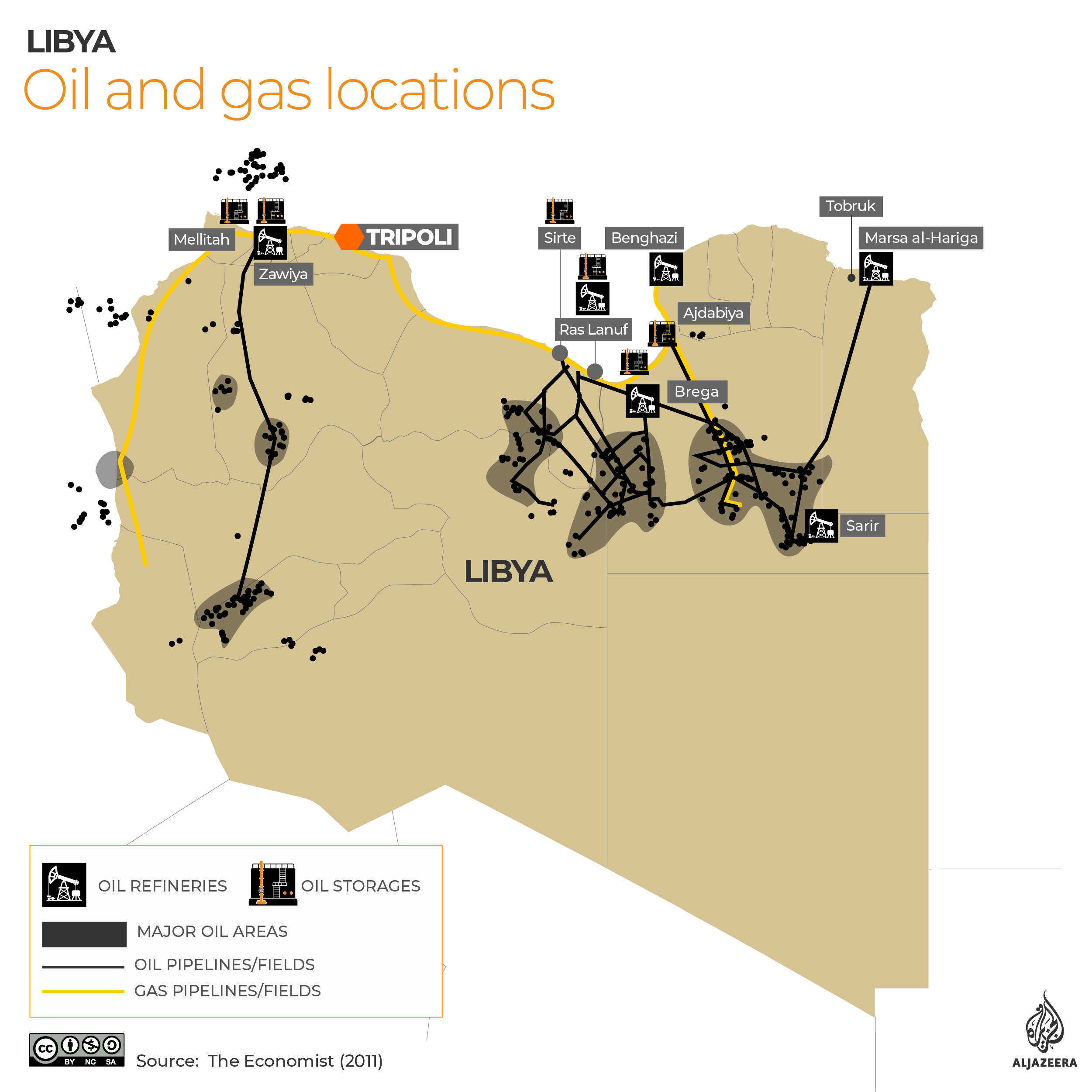 Transition away from Haftar

Following a series of setbacks for the LNA over the past two months, Frederic Wehrey, a senior fellow at the Carnegie Endowment for International Peace, told Al Jazeera that Haftar’s foreign backers have since been reformulating their support as there is frustration with him on the battlefield.

“There’s splits within his foreign patrons,” Wehrey said. “The LNA is mobilising to confront the GNA attack on Sirte and that could perhaps give a slight boost to Haftar. But I think we have to underscore that much of his prestige, his appeal was wound up in the expectation that he would deliver a victory in Tripoli.

“I think all of these powers are trying to position themselves on the battlefield for maximum leverage,” Wehrey said.

Emadeddin Badi, a senior fellow at the Atlantic Council and a Libya analyst, told Al Jazeera that rational and opportunistic backers of Haftar, such as Egypt and Russia, will now focus on succession planning and a transition away from Haftar’s own persona.

“This will, of course, be concomitant with an effort to consolidate his control in central and eastern Libya to avoid significant territorial losses that could have a knock-on effect on eastern Libya.

“In addition to Cairo and Moscow, Abu Dhabi and Paris – which come out as losers having backed a losing gambit – will also now jockey for influence over Libya’s political process moving forward,” Badi said.

According to Anas el-Gomati, founder and director of the Sadeq Institute, Haftar’s backers may have stopped using military force to attack Tripoli, but they’re still willing to fight to preserve their interests in eastern Libya and oil assets east of Sirte, where the UAE and Russia are deploying air assets.

“Their investment goes beyond Haftar so they may be willing … to prop up Haftar. But if Haftar becomes politically embarrassing, I think they’ll drop him,” el-Gomati said.

On the other side, there has been manoeuvring by Turkey, and the United States has asserted itself to a greater degree as well.

Last week, Turkish President Recep Tayyip Erdogan announced “some agreements” had been reached with US President Donald Trump, which could usher a “new era between the US and Turkey regarding the [Libya] process”.

US policy has seen a significant shift from April 2019 when Trump telephoned Haftar and expressed encouragement for his military operation to seize Tripoli.

“I think we can expect to see a greater diminishing of any US hope that Haftar can be a unifying figure for the country, or obviously achieve victory,” Wehrey said.

Russia and the UAE welcomed Egypt’s call for a ceasefire. The European Union also echoed the move last week while urging all parties involved to withdraw their foreign forces and start peace negotiations.

However, calls for a ceasefire are unlikely to result in a meaningful peace any time soon because of a lack of pressure on the ground forces, analysts say.

When Haftar reignited the war in April 2019, Western powers blandly mulled over how to respond.

The United Kingdom discussed the imposition of UN sanctions against Haftar, but consensus remained unlikely.

El-Gomati said calls for a truce are based cynically on some actors trying to “preserve their game”.

“They need to be serious about applying those tools, to apply pressure. Specifically, the litmus test for this is whether or not they can agree to a ceasefire and also an end to the arms embargo violations. This is the weaponisation of peace,” el-Gomati said.

He added it is unclear whether the GNA or its supporters feel they can trust Haftar or his backers, since the LNA entered peace talks several times, only to walk away and resume fighting.

Fathi Bashagha, the GNA’s interior minister, said the government would engage in political talks, but only after taking Sirte and the al-Jufra airbase in the south.

Turkey, meanwhile, dismissed Egypt’s ceasefire proposal as insincere and an attempt to save Haftar. But Ankara said it will continue talks with Moscow on a lasting ceasefire.

In order to forge a diplomatic solution, Wehrey said the main issue is restarting United Nations-led talks, while Haftar’s foreign sponsors would have to find alternatives for him.

The UN support mission in Libya announced recently that GNA and LNA delegations are now in a third round of talks.

While Badi said there may be some form of a diplomatic solution, it is not the likeliest scenario at this stage.

“There will either be a carve-up between Turkey and Russia that will lead to the fragmentation of the two contemporary coalitions, or a more inclusive political process that will see the contemporary political entities in Libya reshuffled,” he said.

Wehrey added while much of the discourse focuses on Russia and Turkey, the alignment of the UAE will be key.

“The French and UAE really enabled and fuelled Haftar’s war from the beginning, which presented an opening for Russians and then the Turks,” said Wehrey.

“In particular, the US has a role in communicating to the UAE the importance of getting back on political track, and also the French. I think the Europeans should play a bigger diplomatic role, but there needs to be greater unity and I think the US can help with that too.”