South Sudan’s president and his former rival have reached a deal on the selection of governors for the country’s 10 states, an issue seen as the biggest threat to peace since a transitional unity government was formed in February.

President Salva Kiir and Riek Machar, a former rebel leader and now vice president, had been at odds over the allocation of states, especially those producing oil, the country’s main earner.

International pressure had been growing, with the United States, the United Kingdom and Norway in a joint statement this month saying “any further delay creates uncertainty that undermines the [political] transition process”.

On Wednesday, a statement by the Minister of Presidential Affairs Nhial Deng Nhial said Kiir’s camp will nominate governors for six states, including the oil-rich Unity State and Central Equatoria, which includes the capital Juba.

Machar’s camp will propose governors for three states, including the largest oil-producing area, the Upper Nile state, while a third signatory to the peace deal, the South Sudan Opposition Alliance, will nominate a governor for Jonglei state.

“With this development, a fresh impetus has been given for the process for the implementation of the agreement,” said Nhial.

“We are very hopeful that with this development, the road is now paved to further positive developments that we hope will be carried out expeditiously.”

The number of states is contentious because the borders will determine the divisions of power in the country.

When it gained independence from Sudan in 2011, South Sudan had 10 states, as set out in its constitution. Kiir increased that in 2015 to 28, then 32 – and has now reduced them to 10, plus three administrative areas.

The composition of the executive and the legislature in the states “shall be discussed and agreed at a later date”, the statement said.

South Sudan plunged into a ruinous civil war in 2013 after Kiir fired Machar, his vice president also at the time. The president accused Machar of plotting to overthrow him, a charge denied by the latter.

Soldiers loyal to the two leaders then clashed with the conflict taking an ethnic dimension, forcing a third of the country’s 12 million people to flee their homes.

The conflict has killed an estimated 400,000 people and left more than 60 percent of the population food insecure, according to the United Nations.

Since 2013, Kiir and Machar have signed several ceasefire agreements, including some lasting for just a few days before fighting resuming shortly after.

In September 2018, the warring parties signed an agreement to form a unity government, which would see Machar return to government as vice president, after previous attempts at ruling together only led to disaster.

“In Jonglei, the vacuum created by the lack of governance has exacerbated cycles of intercommunal violence,” said the statement, while in Central Equatoria a ceasefire between the government and rebels who did not sign the peace deal broke down and fresh fighting erupted.

During the first three months of 2020, 658 people were killed in intercommunal violence in the country, while 452 were injured, the UN rights office said last month. 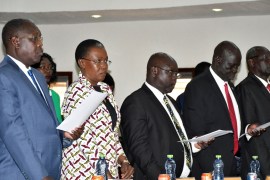 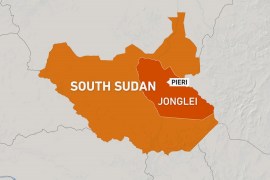 An MSF staffer and two other aid workers were also killed in the violence over the weekend in the Jonglei state. 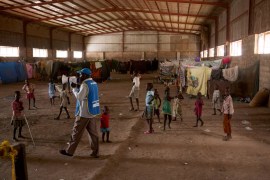 Country’s vice-president says 29-year old patient showed symptoms on April 2 and is being treated in isolation.