Three Indian army personnel, including a commanding officer, have been killed in a “violent face-off” with Chinese soldiers in the Himalayan region of Ladakh, an Indian army spokesman has said.

The Chinese military also suffered casualties in the clash, the editor-in-chief of China’s Global Times newspaper said on Tuesday. It was the first such confrontation between the two Asian giants since 1975 in which soldiers have died.

“Based on what I know, Chinese side also suffered casualties in the Galwan Valley physical clash,” Hu Xijin said in a tweet, without giving further details.

Based on what I know, Chinese side also suffered casualties in the Galwan Valley physical clash. I want to tell the Indian side, don’t be arrogant and misread China’s restraint as being weak. China doesn’t want to have a clash with India, but we don’t fear it.

The incident on Monday night followed weeks of rising tensions and the deployment of thousands of extra troops from both sides in the region.

“During the de-escalation process underway in the Galwan Valley, a violent face-off took place yesterday night with casualties. The loss of lives on the Indian side includes an officer and two soldiers,” the Indian army spokesman said in a statement.

“Senior military officials of the two sides are currently meeting at the venue to defuse the situation,” said the statement.

Speaking to Al Jazeera from the southern Indian state of Tamil Nadu, Ajai Shukla, retired Indian army officer and a military analyst, said the latest clash will “result in political pressure on the [Indian] government to act”.

“This is an extremely serious confrontation, probably the most serious since 1975 when four Indian troops were killed by the Chinese soldiers on the border,” he said.

“The Indian government was actually downplaying the whole thing, except that this latest incident has blown the roof off that position.”

Now hearing that the casualty count on the Indian side is significantly higher than what the initial reports stated. Also, many Indian soldiers captured and then released, an Indian major still held by the Chinese.

Thousands of troops from the two nuclear-armed neighbours, backed by armoured trucks and artillery, have been involved in the latest face-off since May in the Ladakh region, bordering Tibet.

Reporting from New Delhi, Al Jazeera’s Elizabeth Puranam said the Indian defence minister is expected to meet the defence chiefs and the minister of external affairs later on Tuesday over the matter.

“We have two sides saying they are trying to de-escalate the situation. We’ve had meetings for about 10 days now and yet these deaths have taken place despite these assurances,” she said.

Reporting from Beijing, Al Jazeera’s Katrina Yu said China has denied “any responsibility for causing the altercation that resulted in the death of three Indian soldiers”.

Last week, China said it had reached a “positive consensus” with India over resolving the border tensions through diplomatic and military channels. Yu said Lijian on Tuesday accused New Delhi of “violating” that consensus.

“China has made it quite clear it will do whatever it can to protect its sovereignty.”

In a statement last week, India’s foreign ministry said the two sides would “continue the military and diplomatic engagements to resolve the situation and to ensure peace and tranquillity in the border areas”.

But sources and Indian news reports suggested that India appeared to have effectively ceded to China areas that the People’s Liberation Army occupied in recent weeks, notably parts of the northern side of the Pangong Tso Lake and some of the strategically important Galwan River valley.

India’s Prime Minister Narendra Modi and Chinese leader Xi Jinping have sought to ease tensions at summits over the past two years when they agreed to boost border communications between their militaries.

“It will basically take a military-to-military dialogue and a diplomat-to-diplomat dialogue – both are under way – to bear fruit. So far, they have not really borne fruit,” defence analyst Shukla told Al Jazeera. 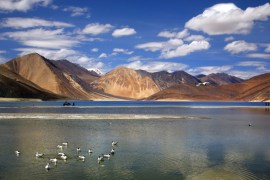 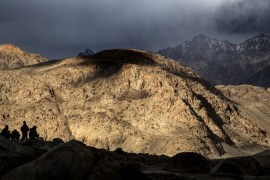 Indian media says thousands of Chinese troops are believed to be inside the Indian territory along the de facto border. 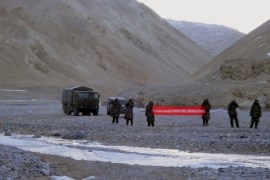 In video conference, the two sides agreed to resolve the dispute through ‘peaceful discussion’, India said.