Ouagadougou, Burkina Faso – In mid-May, Ahmed Dicko, a well-known figure in Ouagadougou’s business community, gathered with a group of volunteers, health workers and journalists outside the main football stadium in Burkina Faso’s capital.

They climbed boarded minibuses and four-wheel drives and joined a military-escorted convoy of trucks laden with food, before driving out of the city on the northerly road to Dicko’s hometown, Djibo.

Since at least February, Djibo, home to some 40,000 people in the country’s violence-hit Soum province, has undergone a blockade by armed groups with possible links to the Islamic State West Africa Province (ISWAP) and Jama’at Nasr al-Islam wal Muslimin (JNIM).

Along a 35km (22 miles) stretch of road between Namsiguia and Djibo, fighters frequently emerge from the bush to stop unescorted vehicles heading in or out of the town before disappearing again to unknown locations, Djibo residents told Al Jazeera by phone. The passengers of these cars, buses and trucks are either turned back to their destination or murdered by the side of the road, they added.

The presence of these temporary roadblocks has scared locals, who avoid using the road without a military escort. It has also severed connections to Ouagadougou, depriving the residents of food and medicine in what is seen as an attempt to weaken the relationship between citizens in the north and the central government. 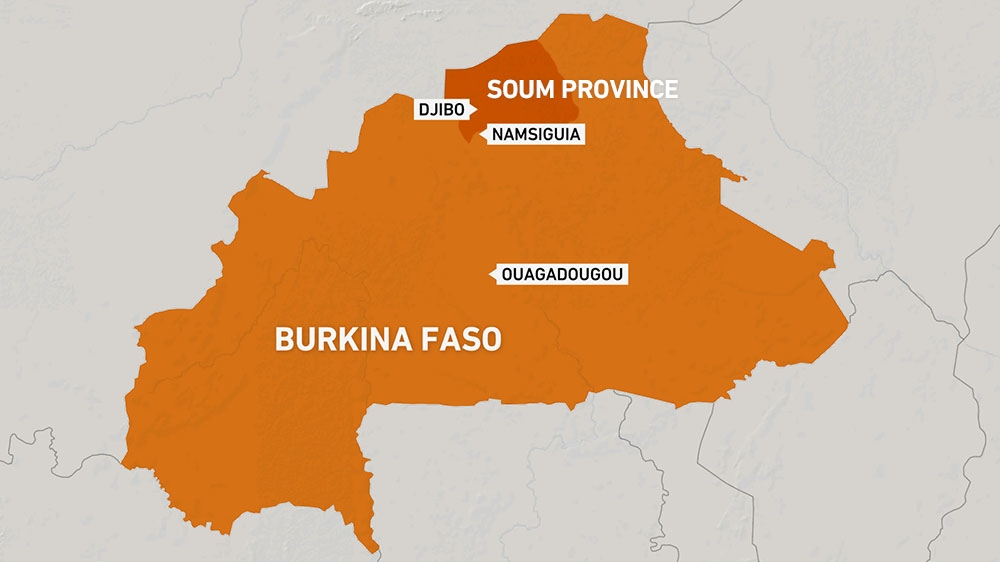 Residents of Djibo said they are desperate for aid, while analysts noted the blockading of towns such as Djibo has emerged as a new tactic for armed groups launching attacks in the country’s north and east.

Dicko, whose primary business is transport of fuel, said his convoy was able to travel to Djibo and deliver food aid thanks to a military escort – but the availability of these escorts is few and far between, and the journey is still risky.

Between Namsiguia and Djibo, Dicko said the sight of abandoned cars riddled with bullet holes and corpses lying beside the road gave the landscape the look of a “war zone”.

“There were decaying bodies and skeletons. Some had died more recently than others,” he told Al Jazeera.

Being from Djibo himself and hearing the plight of those trapped without food, Dicko led a fundraising drive for last month’s aid mission.

“The population [of Djibo] will suffer if this continues, because they were living off farming and animal breeding before,” he said, adding that working the countryside outside the town is now impossible.

“They can’t do that any more, because of terrorism, but they are still obliged to pay for food.”

Late on June 7, two soldiers were killed by an improvised explosive device as they escorted vehicles between Namsiguia and Djibo, just under four hours drive from the capital. The deputy mayor of Djibo was assassinated on the same stretch of road late last year.

Al Jazeera spoke to several civilian sources in the town. One, who spoke on condition of anonymity for fear of reprisals recalled an attack which occurred last month inside the town. “They came in and killed people in their houses, including a police officer and his father,” he said.

Asked what the government was doing about the situation, the civilian said government services in Djibo had shut.

“It’s not good, because it’s affecting the population. We just want the government to come for at least some support. Very soon we will be entering the rainy season and people are afraid.”

Al Jazeera asked the minister of communications of Burkina Faso what the government is doing to assist the people of Djibo. He referred us to the ministry of humanitarian affairs, which did not respond to phone calls or messages.

The government maintains a military garrison in Djibo, but Burkina Faso is one of the poorest countries in the world and is struggling to contain the violence with a critically undertrained and underfunded military. The government also lacks the means to address the economic disenfranchisement plaguing the north and east of the country, allowing armed groups to exploit poverty and other grievances to recruit fighters and stoke more violence.

About 800,000 people have been forced to flee their homes because of the conflict, which has now killed more than 4,000 people since it began in 2015, according to the Armed Conflict Location and Event data project.

Armed groups linked to al-Qaeda and ISIL (ISIS), as well as local bandits, have been killing civilians and members of the security forces alike. Security forces and local defence militias, or koglweogos, have also been accused of carrying out massacres and extrajudicial killings against large numbers of civilians.

In January, a law was passed allowing civilians to be armed, in the hope they could assist the military in the fight against the armed groups.

Human rights groups have expressed serious concerns that arming untrained civilians will lead to even more violence, as has been the case in neighbouring Mali.

The blockade of important towns is now adding to the government’s security frustrations, according to Heni Nsaibia, who runs Menastream, a research consultancy monitoring the conflict.

“It forces the Burkinabe military to spend a lot more effort in supplying these towns and keeping them afloat. It also hampers the armed forces’ own logistic flows, and makes state relations with urban populations living under dire conditions even more fragile,” he says.

In the past, armed groups’ tactics in Burkina Faso have centred around hit-and-run attacks on smaller towns and villages. Maintaining blockades on major towns represents a new escalation.

“There is a pattern,” says Nsaibia. “For instance, Arbinda, Barsalogho and Tankoualou have all suffered ’embargos’. There have been threats in the past few days to impose one on Tanwalbougou.”

“Suffocating major towns appears to have become an integrated component in the evolving strategy of militant groups … I believe it brittles the already weak relationship between civilians and the state,” he adds.

As for Dicko, he said as long as there is a need in Djibo, he will continue to carry out aid missions despite the extremely dangerous circumstances. He says he is not afraid.

“When you’re going into a war zone you need to be prepared to encounter anything. The feeling I have is one of comradery with the team [who went on the mission to Djibo]. We are courageous and proud, despite the risk.”