On March 11, the World Health Organization (WHO) declared the new coronavirus – which was first reported in the Chinese city of Wuhan late last year – a pandemic.

As of May 31, there were more than 6.1 million confirmed cases of COVID-19, according to data collected by Johns Hopkins University, while the number of registered deaths worldwide stood at nearly 371,000.

To date, there is no vaccine or known treatment for the new coronavirus, officially known as SARS-CoV-2. Some of the most basic defences against it include frequent and thorough handwashing with soap and water, physical distancing and self-isolation.

These recommendations have also been the prescribed measures to contain the spread of other highly contagious diseases in the past.

The practice of quarantine for contagious diseases was mentioned in the Canon of Medicine written by Persian polymath Ibn Sina (980-1037), better known in the West as Avicenna, and published in 1025.

The word quarantine comes from the Italian “quaranta giorni”, which translates to 40 days.

Here is a brief look at some of those past pandemics. 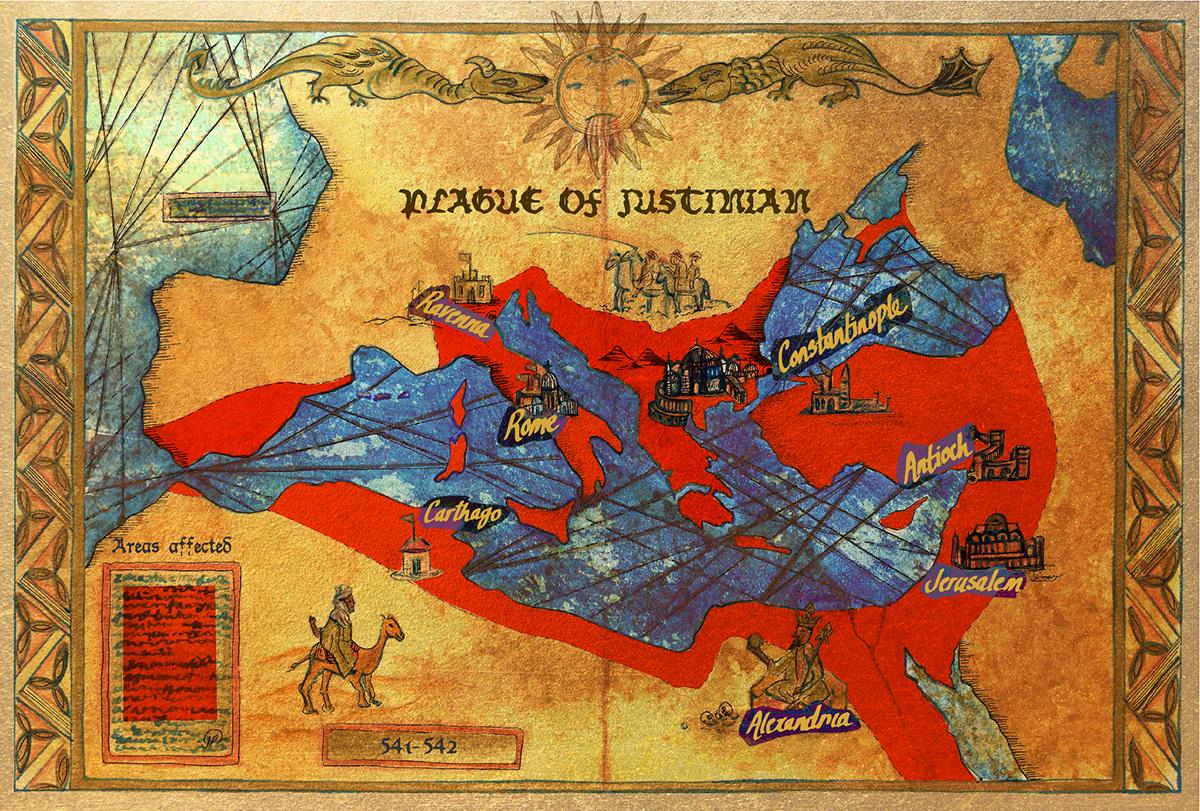 This was the first-ever recorded incident of the plague. Named after the Byzantine emperor, Justinian I, who caught the disease but recovered, it was spread to humans by rodents harbouring fleas that carried the bacterium, Yersinia pestis. The rats travelled on grain ships and in grain carts.

As the political and commercial centre of the Byzantine Empire, Constantinople (modern-day Istanbul) was particularly hard hit. According to ancient historians, the pandemic killed up to 10,000 people a day there, although modern historians say the number may have been closer to 5,000.

But it was not limited to Constantinople. It spread throughout the empire, facilitated by war and trade, killing nearly 25 percent of the population.

It returned every 12 years or so until around 750, eventually wiping out half of Europe’s population (around 100 million people). 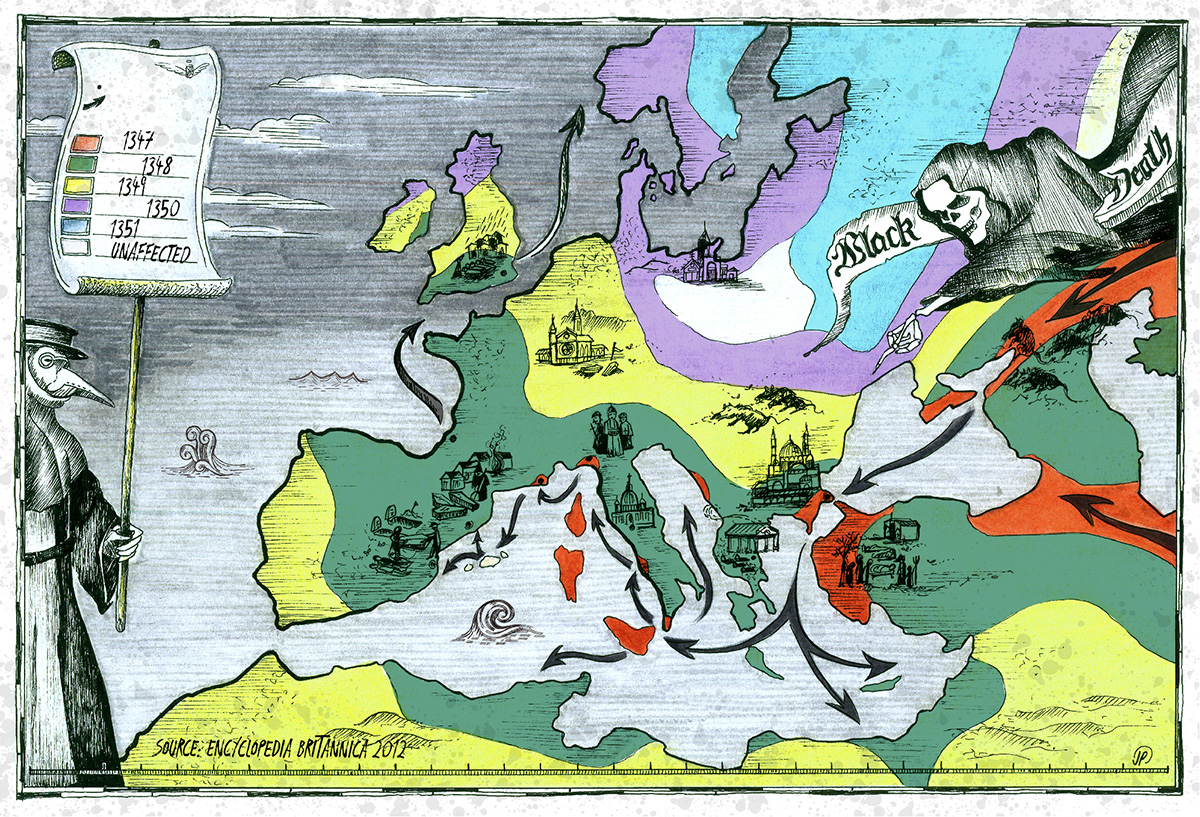 Like the Plague of Justinian, it was also caused by the bacterium, Yersinia pestis, carried by rats. Ships carrying the rats enabled it to spread between continents.

It was supposedly named the Black Death because of the black spots that formed on the skin of the infected.

According to some accounts, the first outbreak of the Black Death in Europe took place in Caffa, on the Crimean Peninsula. In 1346, this important trading post was besieged by the Mongol army, which had conquered lands throughout Asia. Many of the soldiers, however, were infected with the plague. When they succumbed to it, the army catapulted their corpses over the city walls, causing people living inside the city to become infected. 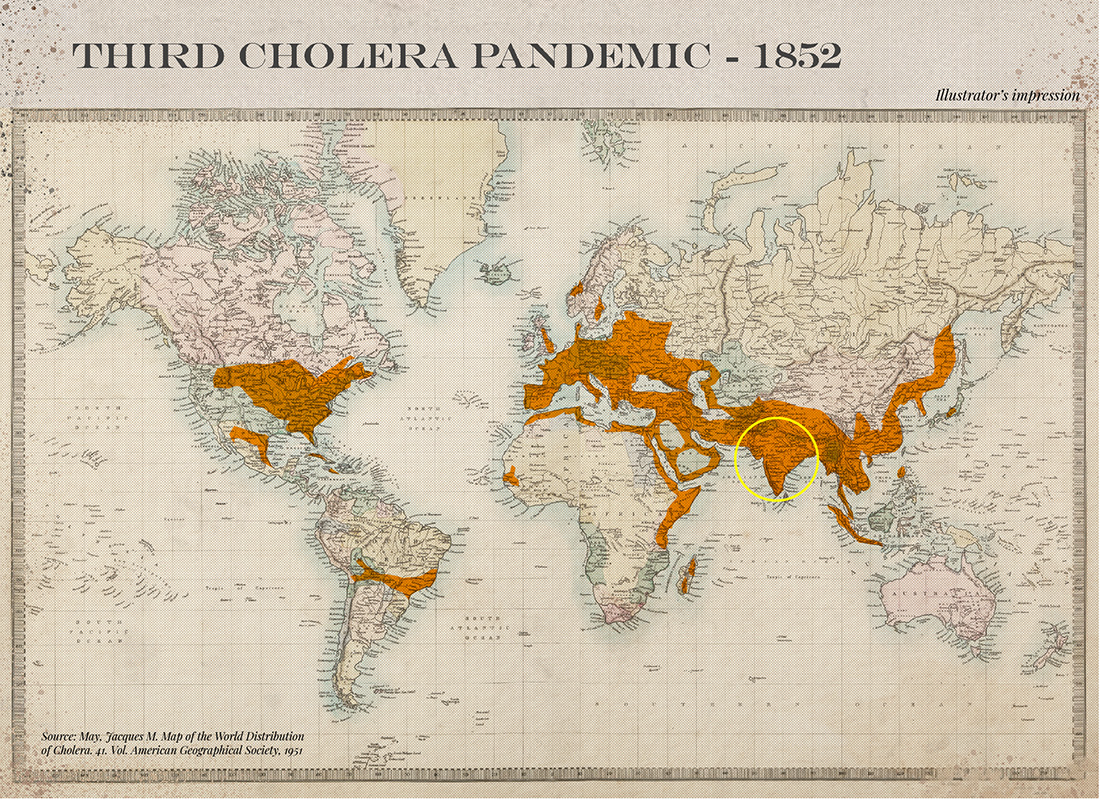 According to the WHO, there have been seven cholera epidemics. The one that had the greatest global impact was the third, in 1852.

It originated in India before spreading through the rest of Asia and parts of Europe, North America and Africa.

Cholera is caused by eating food or drinking water contaminated with the bacterium, Vibrio cholera. It can result in acute diarrhoeal disease that can kill within hours if left untreated.

According to the WHO, there are still 1.3 million to four million cases of cholera each year, with between 21,000 and 143,000 fatalities. 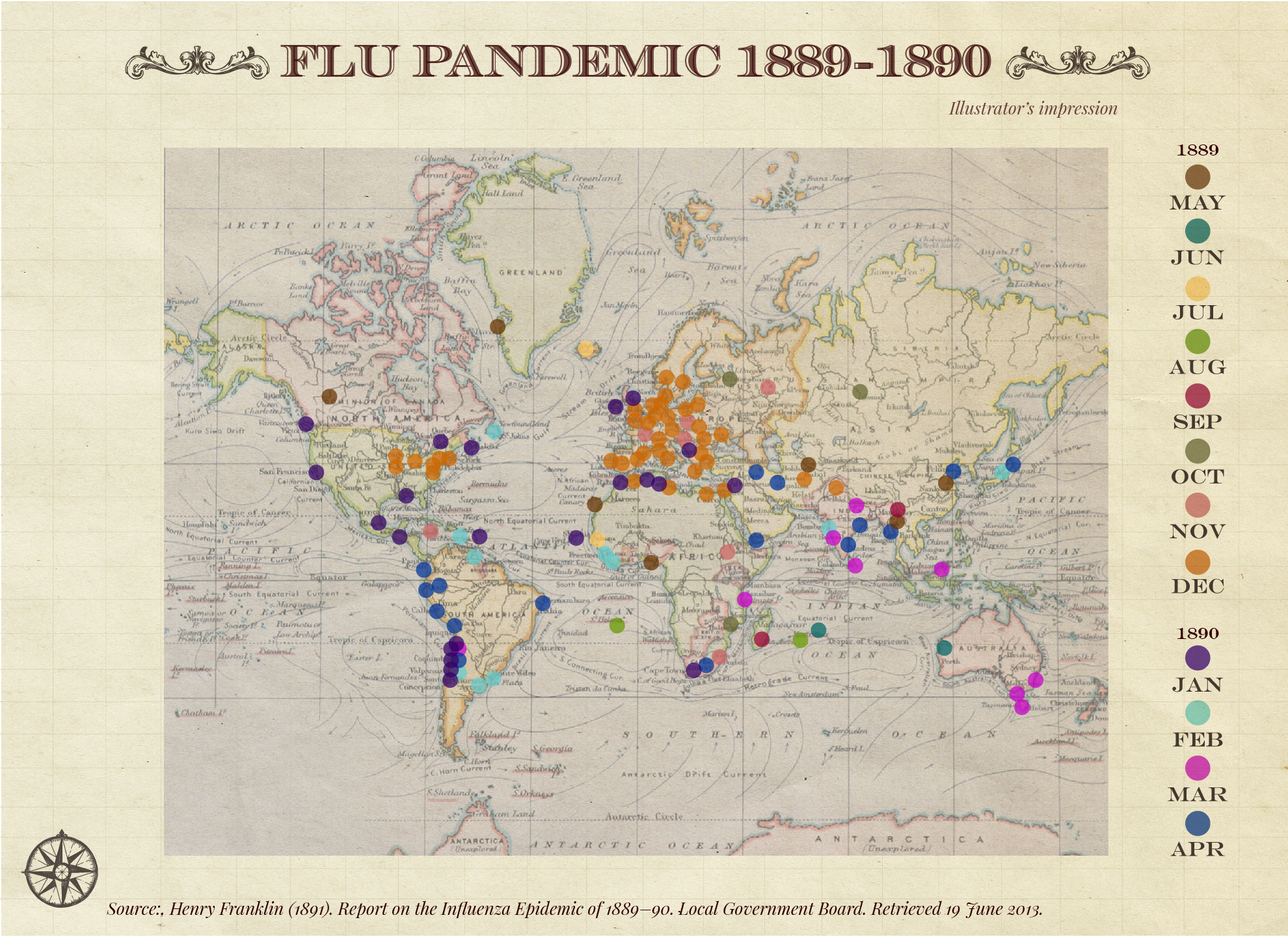 Cause: Influenza A subtype H3N8

Considered the last great pandemic of the 19th century, this particular strain of influenza was known as the “Asiatic Flu” or “Russian Flu”, likely because it originated in the Central Asian region of the Russian Empire.

The pandemic spread quickly, aided by the existence of modern forms of transport, like railroads, and transatlantic travel by boat. In fact, it took just four months to circle the planet, peaking in the US 70 days after its original peak in St Petersburg. 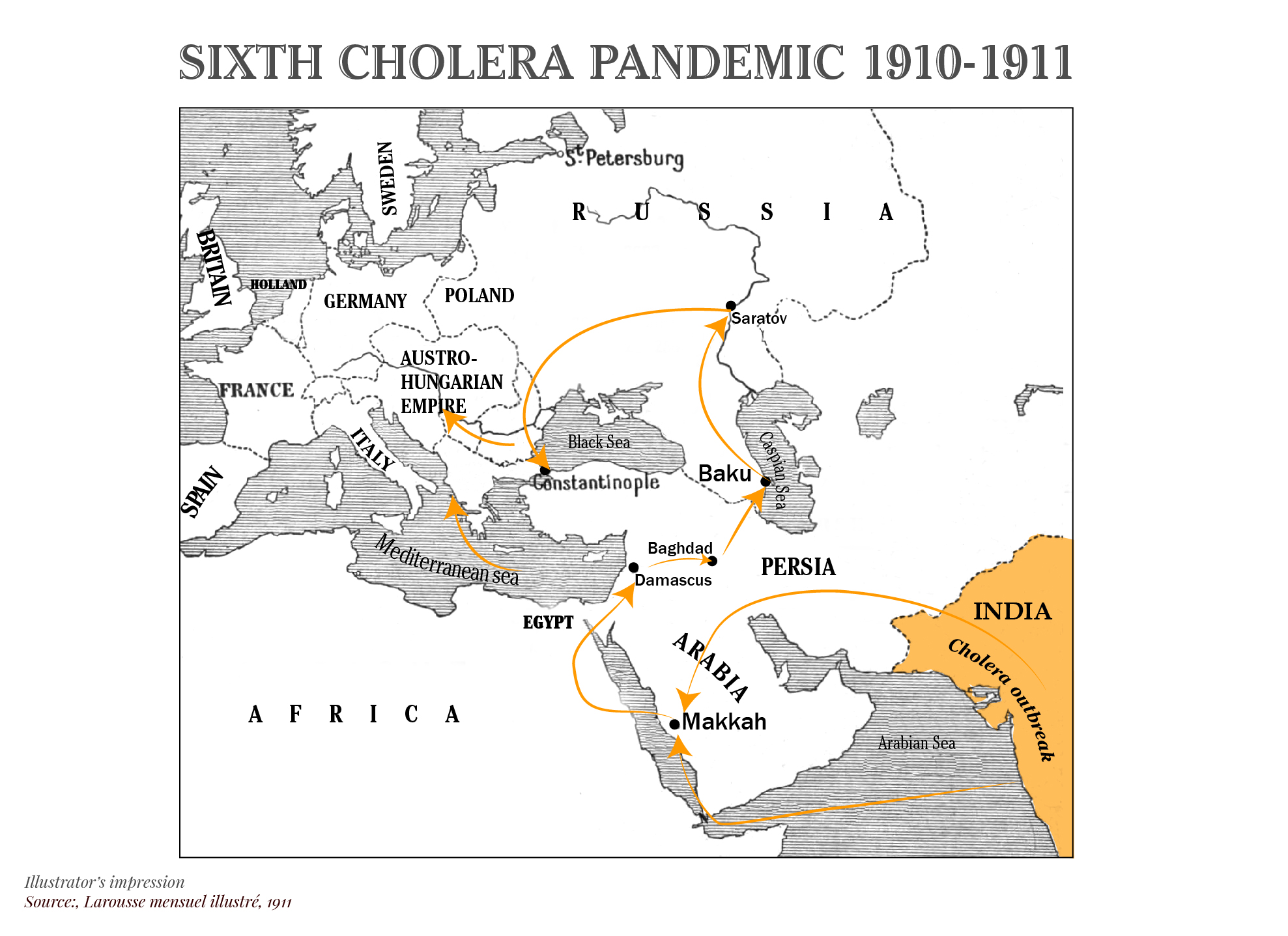 Cholera went through several surges, and its sixth incarnation in 1910, like the ones before it, originated in India.

It killed hundreds of thousands of people before spreading to various parts of the Middle East, North Africa, Europe and Russia.

Cholera transmission is closely linked to inadequate access to clean water and sanitation facilities. It takes between 12 hours and five days for a person to show symptoms after consuming contaminated food or water.

The first identified cases of this particular strain of influenza were recorded in the spring of 1918 among US soldiers during WWI, before spreading worldwide and infecting at least one-third of the global population.

Although the death toll is unknown, many estimates put it at more than 50 million and some as high as 100 million, making it the deadliest pandemic since the Black Death.

In the US, it was dubbed the “Spanish flu”, although researchers could not identify the geographical origin of the disease. However, cases of the illness were widely reported in Spain, which was not involved in WWI and therefore, not subjected to war-time news blackouts, possibly creating a false impression that it originated there.

What was particularly significant about this outbreak was its effect on healthy adults, unlike prior outbreaks where the immunocompromised and juveniles had been more susceptible.

Without any vaccine, this pandemic had two waves. The initial wave being milder than the second. Returning soldiers contributed to the second wave.

Communities imposed quarantines, the wearing of masks and bans on public gatherings as a way of combatting the pandemic. It is thought that these measures, combined with people developing immunity to it, helped to end the pandemic, although there is also a theory that the virus mutated rapidly into a less lethal strain, resulting in a sharp drop in infections and deaths. 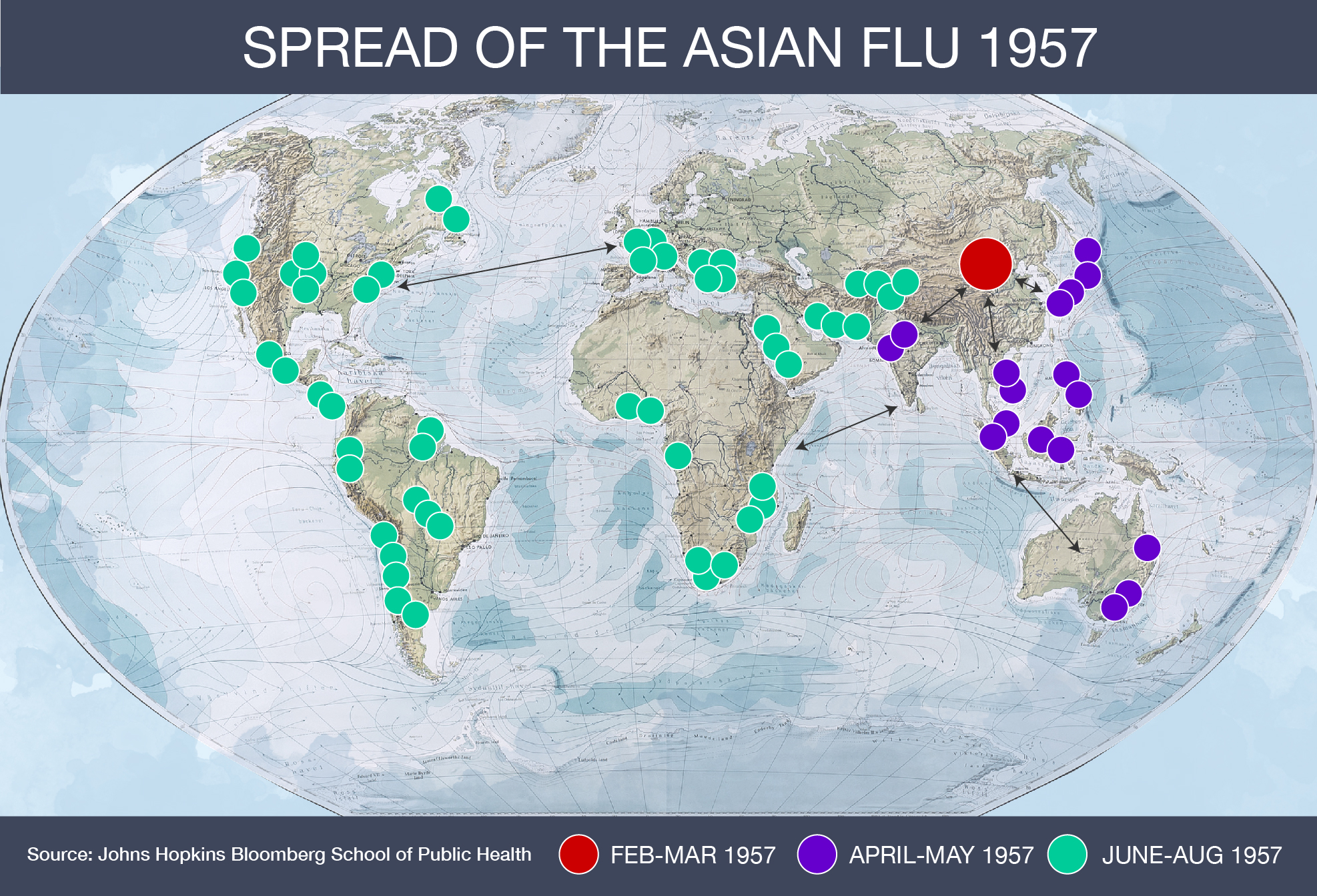 Cause: Influenza A – H2N2 subtype

The first case of the Asian Flu was identified in China in 1956. From there, it travelled to Singapore, Hong Kong and the US. There were also reports of it spreading to India in 1957.

Studies suggested the pandemic originated from strains of avian and human influenza viruses.

Symptoms, which included weakness in the legs, chills, a sore throat, running nose and cough, appeared soon after exposure to the virus.

There were two waves of this outbreak, but the spread of the infection slowed following the development of a vaccine in August 1957. 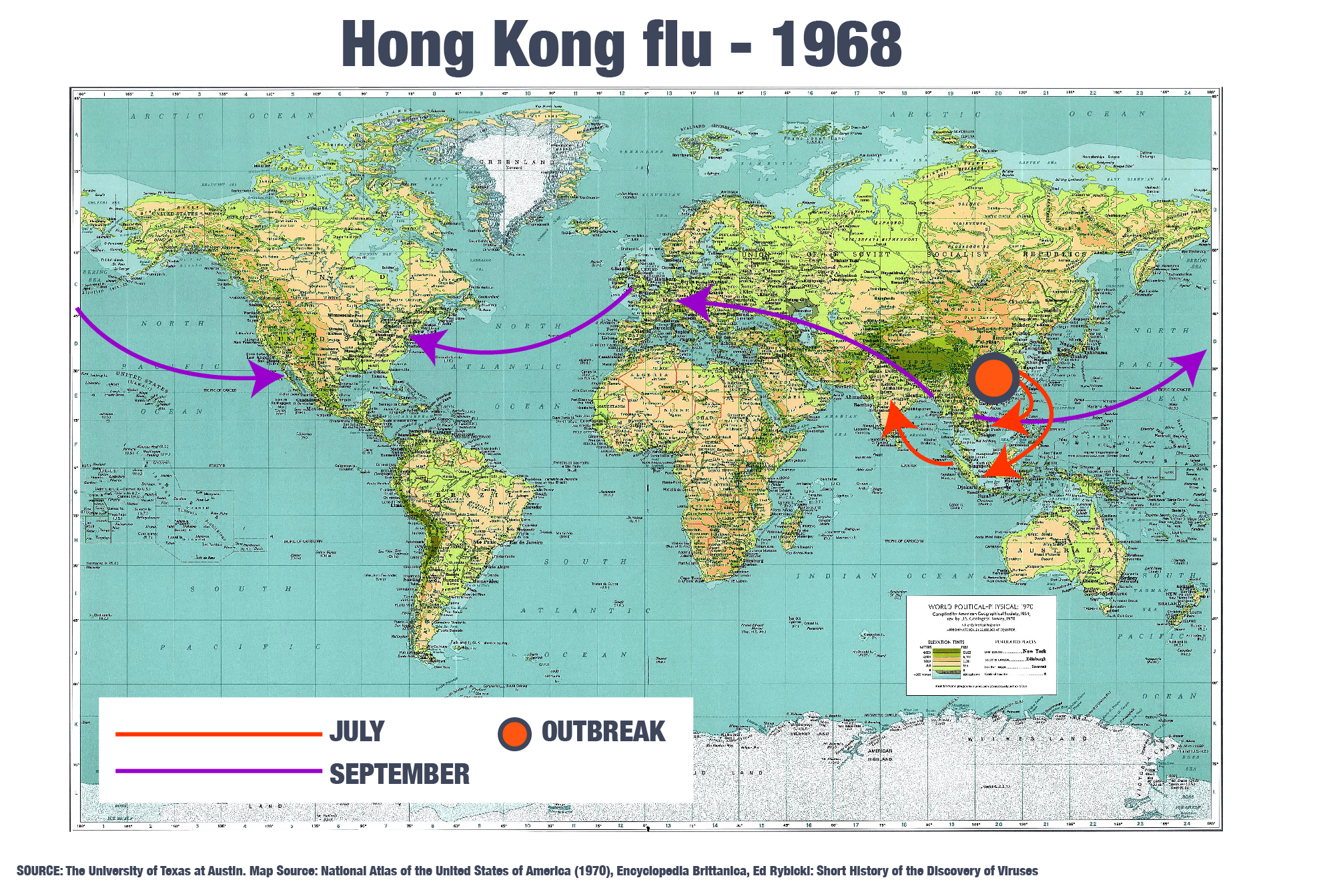 The first reported case of this pandemic was in July 1968 in Hong Kong. Outbreaks occurred in Singapore and Vietnam and within 12 weeks spread to other parts of the world, as far as Africa and South America. In the US, an estimated 100,000 died.

The mutation of the earlier Asian flu in 1956 possibly gave rise to the H3N2 variation, in a process called the antigenic shift, in which the virus mutates.

The death rate was significantly lower than in previous influenza outbreaks, with a case-fatality ratio below 0.5 percent. It is possible that people who were exposed to the earlier pandemic became immune to this particular virus.

Improved medical care and the availability of antibiotics, for secondary bacterial infections, have also been cited as factors for the slower spread of the disease. The H3N2 virus is still in circulation today as the seasonal influenza A virus. 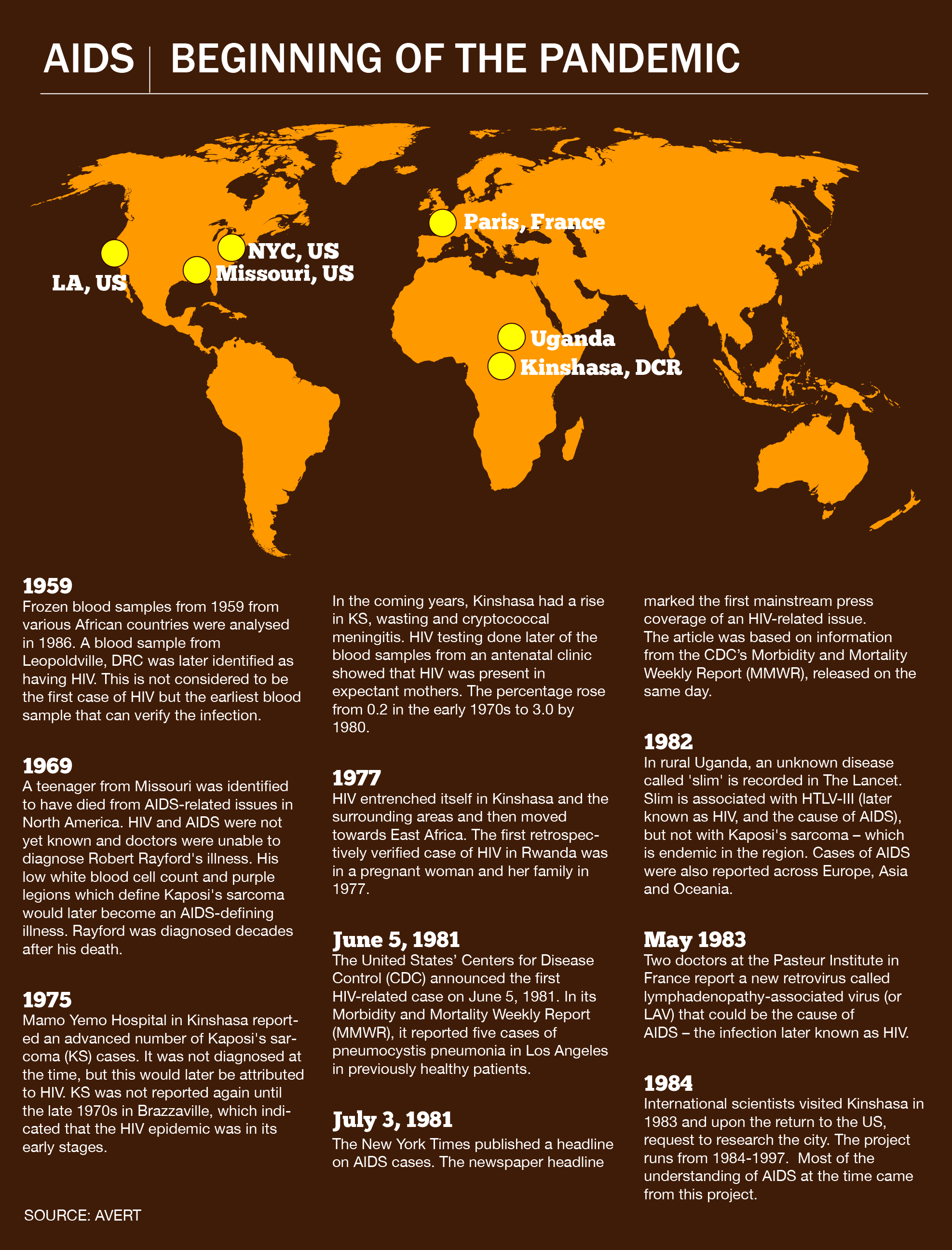 Cause: Human Immunodeficiency Virus (HIV) that attacks the cells that help the body fight infections. If left untreated, it can lead to the disease, AIDS.

Human-to-human transmission can happen through unprotected sexual contact, sharing needles with an HIV-infected person and transfusions of contaminated blood.

Almost one million people die each year because of AIDS. According to the WHO, which refers to it as a global epidemic rather than a pandemic, in certain regions of Africa, which remain the most affected, one in every 25 people is living with HIV, accounting for more than two-thirds of the global HIV count. 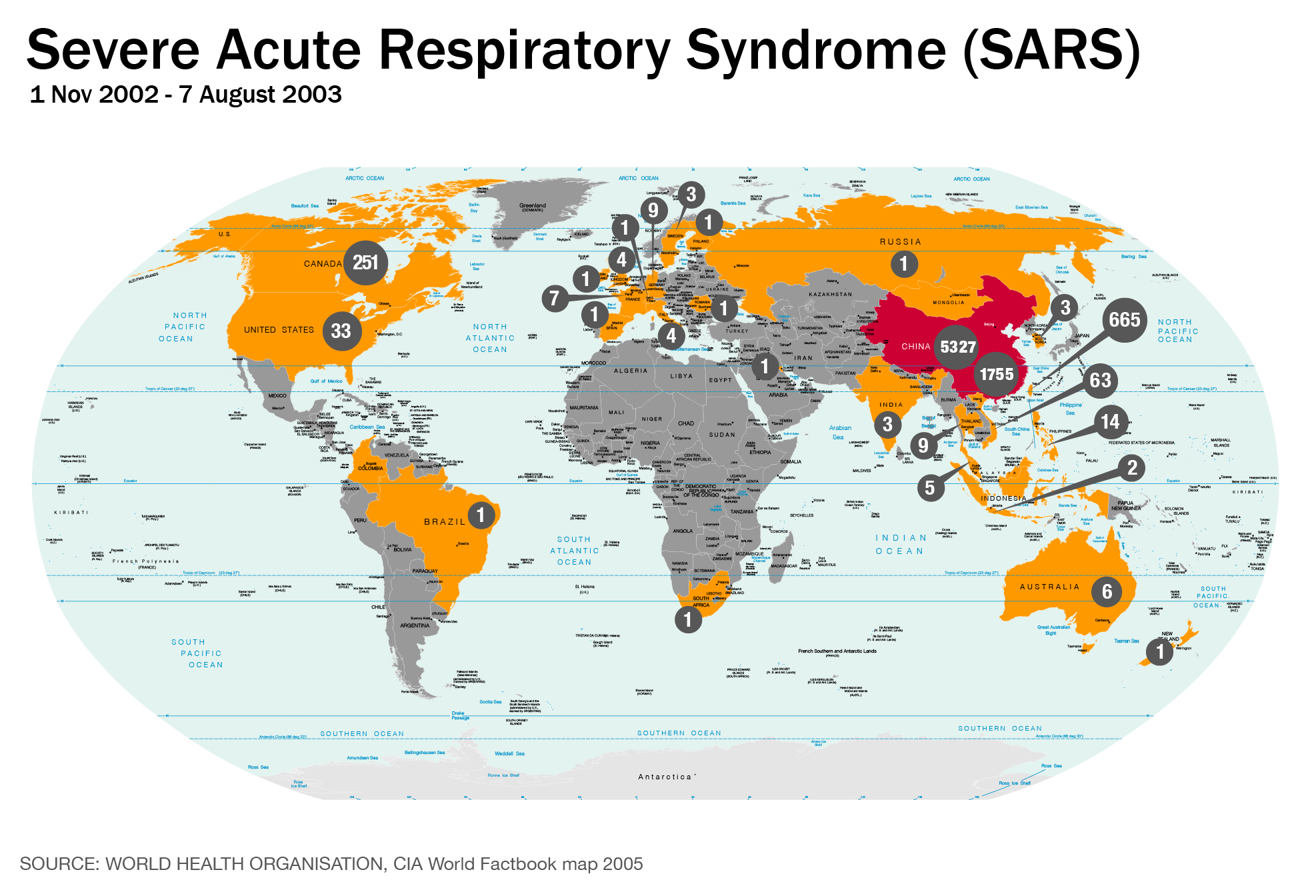 According to the US CDC, SARS-CoV is thought to be a strain of the coronavirus from an as-yet-uncertain animal reservoir, perhaps bats, that spread to other animals (civet cats) and first infected humans in the Guangdong province of southern China in 2002.

SARS-CoV spread to at least 26 countries and infected more 8,000 people, although the death toll was considered very low compared to other pandemics.

Symptoms are influenza-like and include fever, headache, diarrhoea and shivering. Even at the height of the pandemic, in 2003, the overall risk of transmission was low.

Singapore, Hong Kong and Taiwan were hit the hardest, prompting them to establish medical protocols in anticipation of future pandemics.

MERS-CoV, a strain of coronavirus, was first identified in Saudi Arabia in 2012.

Coronaviruses are a large family of viruses that can cause diseases ranging from the common cold to SARS.

MERS is a viral respiratory disease with symptoms that include fever, cough and shortness of breath.

As of January 2020, 2,519 people have been infected with it. It has an extremely high fatality rate compared to other coronaviruses, with almost 35 percent of those who contract it dying.