Health officials in the Democratic Republic of the Congo (DRC) have reported a fresh Ebola outbreak in the country’s northwest, just weeks before they hoped to declare the end of another Ebola epidemic in the country’s east.

The appearance of the deadly disease on the other side of the vast country comes as an added blow as the DRC attempts to also battle the coronavirus pandemic.

Health Minister Eteni Longondo said on Monday “four people have already died” from Ebola in a district of the northwestern city of Mbandaka.

“The National Institute of Biomedical Research (INRB) has confirmed to me that samples from Mbandaka tested positive for Ebola,” Longondo told a news conference.

“We will send them the vaccine and medicine very quickly,” the minister said, adding that he planned to visit the site of the outbreak at the end of the week.

The capital of Equateur Province, Mbandaka is a transport hub on the Congo River with a population of more than a million.

Equateur Province was previously hit by an Ebola outbreak between May and July 2018, in which 33 people died and 21 recovered from the disease.

“This is a province that has already experienced the disease. They know how to respond. They started the response at the local level yesterday [Sunday],” Longondo said. 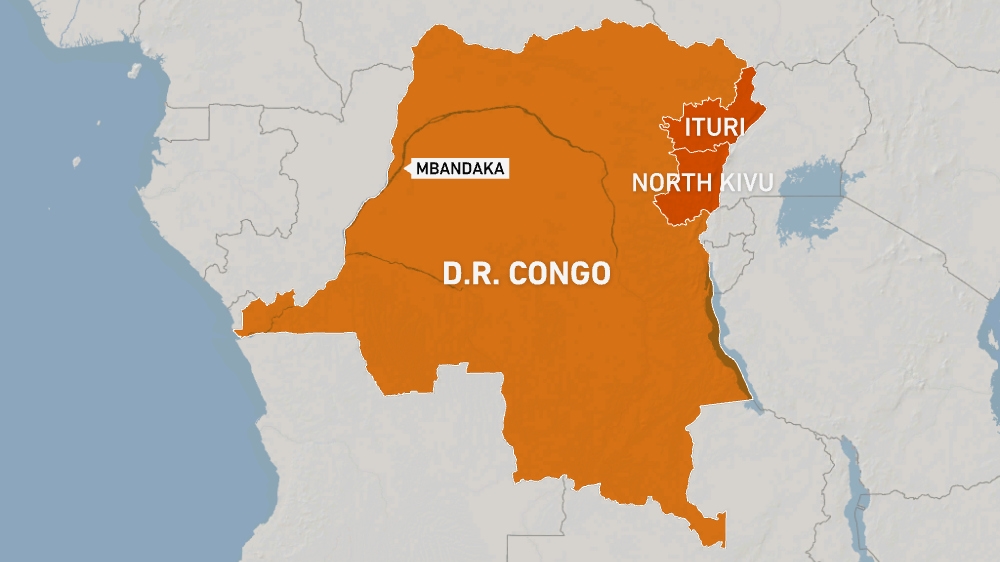 The newest outbreak in the DRC’s northwest is the 11th in the country since scientists first characterised the disease in 1976.

Matshidiso Moeti, WHO regional director for Africa, said the new Ebola outbreak in Mbandaka “represents a challenge, but it’s one we are ready to tackle”.

The new #Ebola outbreak in Mbandaka #DRC represents a challenge, but it's one we are ready to tackle. @WHO has worked w/ @MinSanteRDC, @AfricaCDC & partners over the years to strengthen capacity to respond to outbreaks. With each experience we respond faster & more effectively. pic.twitter.com/SKc6GnI4q4

The Ebola epidemic in the country’s volatile east has killed 2,280 people since it emerged in eastern North Kivu Province in August 2018 and later spread to the neighbouring Ituri province.

The World Health Organization (WHO) declared the outbreak a public health emergency of international concern in July 2019, after the highly contagious virus threatened to spread to the large city of Goma and neighbouring countries.

Fortunes changed with the roll-out of two vaccines produced by Merck and Johnson & Johnson – which are in clinical study phases and not yet licenced – to immunise more than 300,000 people. Prioritising the contacts of people diagnosed with Ebola was highly effective in halting the severe hemorrhagic fever, which attacks multiple bodily organs and can cause uncontrollable internal bleeding.

Officials had hoped to be able to proclaim the outbreak over on June 25. For this to happen, there have to be no new cases reported for 42 days – double the incubation period.

In April, the eastern outbreak was just three days away from being declared over when a new case was reported, pushing the date back.

The DRC is also fighting an outbreak of the new coronavirus, recording so far 3,195 infections – 2,896 in the capital, Kinshasa – and 72 deaths, according to the latest official figures.