The Philippine Congress moved closer on Monday towards enacting a new anti-terrorism law that would allow longer detentions without charge, and give the executive branch more power against dissent, raising alarm among rights groups and the opposition.

The Anti-Terrorism Act of 2020 has been approved at the committee level and members of the House of Representatives are expected to debate and fast-track its approval before they go on a two-month break from June 6.

The Senate approved a similar proposal earlier this year, with only two members dissenting. Both chambers of Congress are controlled by allies President Rodrigo Duterte, whose administration has been pressing for the quick passage of the bill. On Monday, Duterte sent a letter to the Speaker certifying the bill as “urgent”.

By passing a bill identical to the one approved by the Senate, members of the House of Representatives skirt a longer process of reconciling the two versions, and cutting the time to debate and question the merits of the law.

Among the most contentious provisions include the warrantless arrest and 14-day detentions of suspected “terrorists”, and the creation of an anti-terror council that would determine what is terrorism and order arrests without a warrant – a function usually reserved for the courts.

“We should be very concerned about these provisions,” said human rights lawyer Chel Diokno, who ran as an opposition candidate in the Senate in 2019.

Diokno wrote on social media that the steps taken by Congress “railroad” the process of scrutinising details of the law that “endanger our basic rights and freedoms”.

Diokno, who has earned the ire of Duterte, warned that the new law could possibly be used to go after the administration’s critics.

The new bill also proposes 12 years of imprisonment for any person who “joins” designated “terrorist organisations or group(s)”.

The bill also removes a provision on payment of 500,000 Philippine pesos ($10,000) damages for wrongful detention.

In previous statements, the National Union of People’s Lawyers (NUPL) also condemned the bill as “sanctioned state terrorism”, adding that given the government’s vilification of political dissenters, anyone could be accused of terrorism.

Defence Secretary Delfin Lorenzana on Sunday defended the proposal, saying, “the people need not fear”, because there were civil liberties “safeguards” in place.

Duterte’s national security adviser Hermogenes Esperon Jr was also quoted by news reports as saying: “The bill provides for measures that will preclude or minimise abuses in implementing the law.”

The rights group, Karapatan, however, disputed the claims of the government officials, saying the new law “will only embolden to commit more human rights violations with more impunity”.

“We have already seen what happens when state security forces are given more power. Ordinary citizens criticising the president and his anti-people policies have been served subpoenas or have been put under surveillance, harassed and arrested, even for satirical posts,” said Karapatan Deputy Secretary General Roneo Clamor. 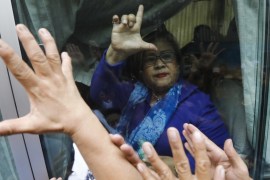 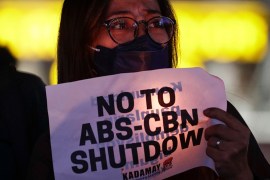