Two people have died and 22 others were injured as they fled their homes in a panic following a magnitude 5.1 earthquake that hit northern Iran early on Friday (20:18 GMT on Thursday), according to state media.

Among the dead were a 21-year-old woman in Tehran who suffered heart failure, and a 60-year-old man in the city of Damavand, east of the capital, killed by a head injury, officials said.

According to the United States Geological Survey (USGS), the epicentre of the earthquake was at Damavand, just northeast of the capital, at the depth of 10km (6.2 miles).

One resident in the Iranian capital told Al Jazeera that the shaking of the ground felt “very strong”.

#Tehran #Earthquake photos of people waiting in the street in the early hours by IRNA. May 8 (Thr time) #زلزله_تهران #زلزله#Iran pic.twitter.com/mVS15DCLzC

Images posted on social media showed people huddled in the streets of Tehran in the middle of the night, as they tried to escape from the quake.

People are coming out into the streets after a 5.1 richter earthquake just hit near Tehran. Aftershocks are possible. An official in #Iran’s National Crisis Org has told people to maintain social distancing as they get out of their homes. pic.twitter.com/5E0oYc9MfJ

There were several mild aftershocks, but no serious damage from the quake that struck after midnight on the border of the provinces of Tehran and Mazandaran, authorities said.

Boulders were also seen blocking the roadway leading to the mountainous Damavand area.

Many people in Tehran have left their homes out of fear of possible aftershocks.

Officials urged people who spent the night outdoors to observe social distancing to limit spread of the coronavirus that has killed nearly 6,500 and infected more than 103,000 in Iran.

They assured the public there was no shortage of petrol as people rushed to gas stations to fill up after the quake.

Iran is one of the most seismically active countries in the world, where earthquakes occur often and are destructive. 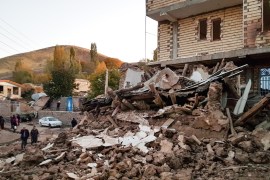 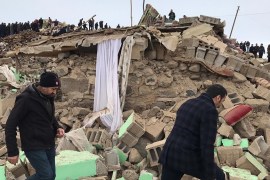 The magnitude 5.7 earthquake kills nine people and leaves 37 others wounded, according to Turkey’s health minister.