Karachi, Pakistan – Twenty-three-year-old Iqra Nazeer Ahmed discards her gloves and gingerly sprays a diluted solution of disinfectant on her mask, careful to avoid touching anything around her lest she expose her younger siblings and elderly parents to the coronavirus.

She is exhausted after working for nearly 12 hours straight as a volunteer to help provide food and other rations to people suffering under a strict lockdown in the southern Pakistani province of Sindh.

Ahmed, and patriotic young people like her, are the future of Pakistan’s “Tiger Force” – an effort by the government to leverage the country’s young population for COVID-19 relief efforts.

“I registered for the Tiger Force within the first few days,” she says. “I … wanted to serve my country during this crisis.”

The force is part of an ambitious multi-pronged strategy by Khan’s government to impose movement restrictions and shut down industries while also ensuring that Pakistan’s poorest citizens – many of whom rely on daily wages to survive – continue to receive adequate supplies of food and other essentials.

According to a 2016 United Nations Development Programme study, at least 39 percent of Pakistan’s 220 million population live in multi-dimensional poverty, and Khan has repeatedly said he has delayed implementing a full economic shutdown to ensure that systems are put into place to feed those people.

Pakistan’s government chose a strategy of implementing an incremental lockdown to stave off possible public panic.

In neighbouring India, by contrast, a full nationwide lockdown was announced with four hours’ notice by Prime Minister Narendra Modi on March 24. India, too, has chosen to launch a relief fund targeting low-income families, with at least $850m gathered through donations from the public.

Bangladesh has extended a nationwide lockdown until May 16, with Prime Minister Sheikh Hasina’s government releasing relief packages worth more than $1.7bn aimed at struggling farmers.

The question remains, however: When the country is locked down, how will these governments address the daily needs of their poorest citizens?

At only 0.6 beds per thousand individuals, compared to Italy’s 3.4 beds per thousand, or the UK’s 2.8, Pakistan’s already frail medical system, with a paltry 3,844 ventilators for its population of 220 million, is at risk of being overwhelmed.

Potential medical constraints loom large on one end, but the financial devastation of the partial lockdown is already palpable. Pakistan has imposed varying degrees of lockdown in different provinces as the imminent threat of starvation for daily wage earners remains an ever-present threat.

“We are walking a tightrope,” said PM Khan, of the elusive balance that the nation is trying to achieve in mitigating the spread of COVID-19 versus managing the potential economic devastation it could wreak on an already sputtering economy.

With the government moving to completely seal off areas with high numbers of reported cases, the delivery of food to quarantined neighbourhoods has already become a formidable challenge.

This is where the Tiger Force of volunteers is meant to step in: providing uninterrupted food supplies to fully quarantined areas, distributing aid to the impoverished and conducting widespread hygiene and health awareness campaigns.

Despite the fact that registrations are still ongoing, some local government bodies have already begun to manage relief efforts.

“We’re generally out from 11am to 8 or 9pm. We observe social distancing protocols, but it gets crowded when it’s time for distribution,” says Ahmed.

Volunteers inform members of parliament for each district if there is a need for additional food rations in an area, which are then dispatched, according to Ahmed.

As more data is gathered and consolidated, volunteers will monitor which families have received food and which are still in need. The supply chain is managed by members of parliament for the relevant district, she says.

“We’re on our second wave [of distribution] now, because a family of eight can’t survive for a month on 10kg of flour,” she says.

Besides the volunteers, Pakistan has also launched the largest social assistance programme in its history, providing a one-time grant of Rs 12,000 ($70) to 12 million families across the country.

One of Ahmed’s responsibilities at this stage is to manage registrations for that programme, which uses the infrastructure from the existing Benazir Income Support Programme (BISP) – a welfare programme named after former Prime Minister Benazir Bhutto – and automated data analysis to identify needy families. 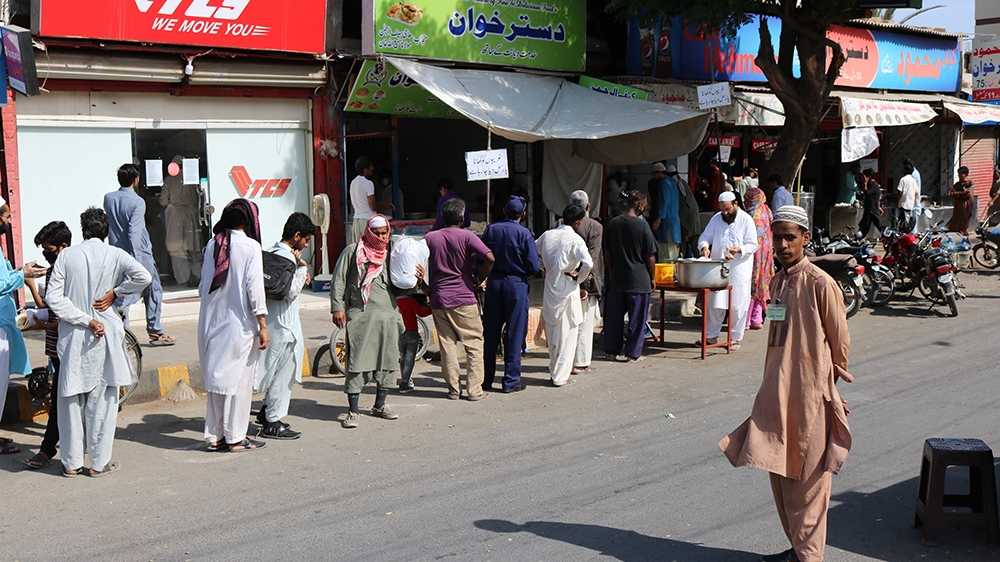 Those who study the programme, however, say it could leave some of the neediest families behind.

“The concern is that the [existing] poverty database is static, with an update of the registry still under way,” says Rehan Jamil, a PhD at Brown University who researches the impact of BISP.

“In the current crisis, there are concerns that immediate relief will not get to many who we know may be outside the database. To address this challenge the government has asked district governments to identify eligible candidates whose eligibility will then be verified.”

Wealth profiling criteria used to cull the lists include whether the applicant’s identification card is associated with ownership of a car, overseas travel and average monthly utility bills.

For minority groups, the grant could potentially worsen inequalities, according to Dr Moizza B Sarwar, a social policy expert affiliated with the London-based Overseas Development Institute.

“My worry remains that this programme will continue to exclude those who were already excluded from most government programmes because they do not have CNICs [national identity cards]: these would include religious and ethnic minorities as well as recently widowed women whose access to CNICs has been a historical problem,” she told Al Jazeera.

The government’s Tiger Force has provoked a mixed response from those working in the humanitarian sector.

“The benefits of this initiative are two-fold: the government will have active volunteers for distribution, and a sense of social responsibility will be inculcated in our youth, which is vital if we wish to establish Pakistan as a ‘falahi riyasat’ [welfare state],” says Shumaila Israr, an assistant professor at Karachi’s Bahria University.

Muhammad Ahsan Rizvi, an economist, says the formation of the volunteer force ties into a strong culture of philanthropy and giving alms within Pakistan.

“Pakistanis are obsessed with sharing food. If you’re on the streets near iftar [when Muslims break their fast during Ramadan] you see so much distribution going on,” he says. “It doesn’t matter whether it’s to a person in a swanky BMW or someone walking barefoot on the road. Our nation wants to redistribute wealth, and we’re using that sentiment to fight the economic fallout of corona.”

Others, however, say the task at hand is too large for a volunteer force to handle and that it will take time for them to get organised – time that the virus’s spread may not allow.

“It’s pretty late in the day,” says Noreen Fatima, a volunteer with the Karachi Bachao Tehreek aid organisation. “The federal government initially vacillated between full or partial lockdown. But either way, people are out of work and have to pay rent and buy their food.”

Others echo the sentiment that the economic damage from the lockdown is already being felt.

“I get heartbreaking phone calls from families surviving on boiled rice water – and now they’re running out of that, too,” says Sabiha Akhlaq, the founder of the SSARA Foundation aid group.

Political opponents, too, have hit out at the government, accusing it of “sleepwalking” into a potential disaster.

Criticisms of the establishment of the new force have centred on the time it will take the organisation to compile data, screen volunteers and train them, bypassing existing local governance structures and leading to a possible duplication of effort.

“It’s an unusual measure for a sitting PM to mandate a completely separate and voluntary entity to conduct the work that government organisations such as BISP are already doing,” says Sarwar, the London-based researcher. “As an analyst it’s hard not to see this as a duplication of effort, particularly since it is unclear how these youth will be trained.”

Supporters of the Tiger Force, however, say that the new organisation is needed because of a lack of confidence in those existing structures. Pakistan has faced a history of systemic corruption.

Although the Ehsaas programme is tightening its surveillance against embezzlement, even amid the pandemic, there have been reports of government officers demanding bribes before disbursing cash grants to low-income families.

Nevertheless, the initiative remains Pakistan’s main government tool to take on a crisis that countries around the world are facing: how to tackle the economic fallout of lockdowns that are necessary to slow the spread of the coronavirus.

“Even if 80-85 percent of the aid gets to the impoverished through this force, I’m willing to let the rest of the 15 percent go,” says Huma Baqai, associate dean at Institute of Business Administration, Karachi.