The United Kingdom, which has the second-highest coronavirus death toll in Europe after Italy, is this week expected to present a possible way out of the coronavirus lockdown to get the world’s fifth-largest economy back to work – without triggering a second spike in cases.

The move comes as several European countries, led by Italy – so far the continent’s worst-affected nation with most deaths – attempt to start easing lockdowns amid improving infection rates.

Under the current lockdown, first announced on March 23, schools, leisure centres, museums and cafes were closed, as well as shops aside from supermarkets. Apart from essential workers, employees were advised to work from home. Hospitals postponed non-urgent surgeries to deal with more coronavirus patients.

Parks remained open, although in some cases playground areas were closed off. Elderly, pregnant and high-risk people, such as transplant patients, were strongly advised to self-isolate where possible.

Since March 23, some DIY stores have reopened.

The UK government, which says it has passed the peak, is obliged to review the lockdown by Thursday and Prime Minister Boris Johnson has said he would like to set out a plan and a menu of options for easing restrictions.

On Monday, Ben Wallace, the defence secretary, told UK media how the country could return to work – with measures including enforcing extensive hygiene measures, limiting time spent close to colleagues and setting up shields to separate employees from one another.

The BBC said it had seen draft details of the government’s proposals, which include reducing hot-desk style working.

Earlier, Grant Shapps, transport secretary, said workplace timings could be staggered to avoid a rush of commuters at once, while suggesting public transport might be equipped with hand sanitiser.

At least 28,446 people have died of coronavirus in the UK – compared with Italy’s 28,884 – and there are rising concerns that the number of UK deaths is being undercounted.

Aside from the workplace, schools will not reopen until at least early June, and only then if the effective reproduction number is at a safe level, Downing Street said.

Johnson previously outlined five tests that must be met before the restrictions can be lifted in the country:

“The National Health Service (NHS) has sufficient capacity to provide critical care and specialist treatment right across the United Kingdom.”

“A sustained and consistent fall in daily deaths from coronavirus.”

Government scientists say while the daily death tolls show a downward trend they expect them to plateau for a while.

“Reliable data to show that the rate of infection is decreasing to manageable levels across the board.”

Johnson has said keeping the effective reproduction number – R0 or “R nought” – down is absolutely vital. That is the average number of people that one person with the coronavirus infects. Scientists say the R number is in a range of 0.6 to 0.9 whereas it was 3.0 in March. That means each infected person is now, on average, infecting less than one other person.

“Operational challenges including testing and personal protective equipment (PPE) are in hand with supply able to meet future demand.”

Health Secretary Matt Hancock said on Friday that the UK had hit its target of carrying out 100,000 COVID-19 tests a day. He said 122,347 tests were conducted in the 24 hours to 08:00 GMT on Friday. However, figures on Sunday showed only 76,496 tests had been carried out the previous day.

There have been problems, however, in getting PPE to some front line health workers and care homes.

“Confident that any adjustments to the current measures will not risk a second peak of infections that overwhelms the NHS.”

This is the hardest test to fathom and the most dangerous for Johnson. Scientists will be watching the R number very closely to ensure it does not rise above 1.0. There is no specific treatment for the new coronavirus nor is there a vaccine as yet. 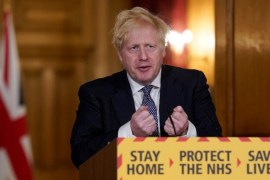 Prime minister tells The Sun doctors gave him ‘litres and litres of oxygen’ to keep him alive. 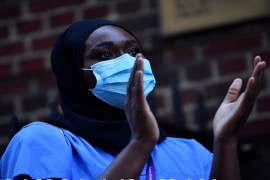