Taiwan will provide the people of Hong Kong with “necessary assistance”, President Tsai Ing-wen said, after a resurgence in protests in the Chinese ruled territory against newly proposed national security legislation from Beijing.

Writing on her Facebook page late on Sunday, Tsai said the proposed legislation was a serious threat to Hong Kong’s freedoms and judicial independence – a statement that is likely to rile up China, which considers Taiwan part of its territory.

Taiwan has become a refuge for a small but growing number of pro-democracy protesters fleeing Hong Kong, which has been roiled by protests since last year.

Hong Kong police on Sunday fired tear gas and water cannon to disperse thousands of people who rallied on to protest against Beijing’s plan to impose national security laws on the territory.

Bullets and repression are not the way to deal with the aspirations of Hong Kong’s people for freedom and democracy, Taiwan’s president said.

“In face of the changing situation, the international community has proactively stretched out a helping hand to Hong Kong’s people,” Tsai wrote.

Taiwan will “even more proactively perfect and forge ahead with relevant support work, and provide Hong Kong’s people with necessary assistance”, she wrote.

Taiwan has no law on refugees that could be applied to Hong Kong protesters, who seek asylum on the island. Its laws do promise, however, to help Hong Kong citizens whose safety and liberty are threatened for political reasons.

The Hong Kong protests have won widespread sympathy in Taiwan, and the support for the protesters by Tsai and her administration has worsened already poor ties between Taipei and Beijing.

China, which claims Taiwan as its own, has accused supporters of Taiwan’s independence of colluding with the protesters.

China believes Tsai to be a “separatist” bent on declaring the island’s formal independence.

Tsai says Taiwan is already an independent country called the Republic of China, its official name.

Tsai’s latest statement on Hong Kong could also further complicate its delicate relationship with Beijing, as she begins her second term in office.

In her inauguration speech last week, Tsai pledged to seek stability in relations with China, saying that “peace, parity, democracy, and dialogue” should form the basis for contacts between the sides as a means to prevent intensifying antagonisms and differences.

Meanwhile, Chinese Foreign Minister Wang Yi said the proposed law for Hong Kong should be imposed “without the slightest delay”.

The proposal is expected to ban treason, subversion and sedition, and comes after Hong Kong was shaken by months of enormous and sometimes violent anti-government protests. 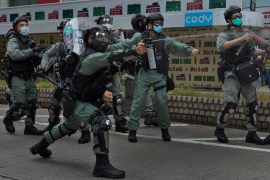 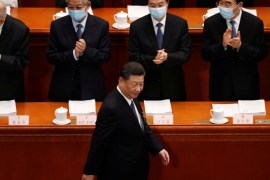 How much of a headache is Hong Kong to China?

Twenty-three years after sovereignty was returned to China, Hong Kong faces the biggest threat to its prized autonomy. 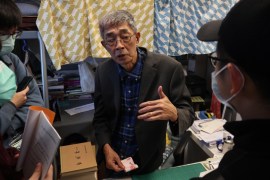