Envoy Nickolay Mladenov also called on the Palestinians to resume talks with the so-called Quartet, comprised of the United States, Russia, the European Union, and the United Nations.

“Israel must abandon threats of annexation,” Mladenov said during a meeting of the UN Security Council on Wednesday.

“I call on my colleagues in the Middle East Quartet to work with the UN and quickly come forward with a proposal that will enable the Quartet to take up its mediation role and work jointly with countries in the region to advance the prospect of peace,” he added.

The unusually direct statement came a day after Palestinian President Mahmoud Abbas announced an end to the Palestinians’ security arrangements with the US and Israel, which has vowed to annex territories in the occupied West Bank.

“The Palestine Liberation Organization and the State of Palestine are absolved, as of today, of all the agreements and understandings with the American and Israeli governments and of all the obligations based on these understandings and agreements, including the security ones,” Abbas said at an emergency meeting for the Palestinian leadership in Ramallah on Tuesday.

The Palestinians have rejected a Middle East plan by US President Donald Trump’s administration that was proposed in January and that would see the annexation of parts of the occupied West Bank and Jordan Valley.

Mladenov said he would speak on Thursday with Palestinian leaders about the practical consequences of their announcement, which were not spelled out by Abbas.

“The continuing threat of annexation by Israel of parts of the West Bank would constitute a most serious violation of international law,” Mladenov warned.

It would “deal a devastating blow to the two-state solution, close the door to a renewal of negotiations, and threaten efforts to advance regional peace and our broader efforts to maintain international peace and security,” he said.

US calls for negotiations

The US ambassador to the United Nations, Kelly Craft, said a solution could only result from the two parties sitting down at the same negotiating table.

“What is needed right now, if we hope to take even a first step in the right direction, is for the parties to sit down with one another,” she said.

“This council cannot dictate the end of this conflict. We can only encourage the parties to sit down to determine how they wish to make progress.”

The US diplomat once again called on the Palestinians to seize the opportunity offered by a US Middle East plan that it has previously rejected.

Meanwhile, France’s foreign minister said on Wednesday that Paris was working with European partners to come up with a joint action plan for prevention or reprisal should Israel go ahead with its annexations threats.

“For the past few days we have held several video conferences with European colleagues … with a view to deciding on a joint preventive action and eventually a reprisal if such a decision were taken,” Jean-Yves Le Drian said at a parliament hearing.

In a joint statement, France, Belgium, Germany and Estonia reaffirmed they “will not recognise any changes to the 1967 borders, unless agreed by Israelis and Palestinians”.

“We strongly urge Israel to refrain from any unilateral decision that would lead to the annexation of any occupied Palestinian territory and would be, as such, contrary to international law,” they said, reaffirming their support for a two-state solution as the only one capable of bringing peace to the region.

At the same time, the Vatican said Israel’s possible annexation of large parts of the occupied West Bank was concerning and could further compromise peace talks.

Respect for international law and UN resolutions was an “indispensable element for the two peoples to live side by side”, the Vatican said following talks between chief foreign policy official Archbishop Paul Richard Gallagher and Palestinian negotiator Saeb Erekat.

“The Holy See is following the situation closely and expresses concern about any future actions that could further compromise dialogue,” the Vatican said in a statement.

It added that the Roman Catholic city-state hoped a resolution could soon be found through direct talks “so that peace may finally reign in the Holy Land, so beloved by Jews and Christians and Muslims”. 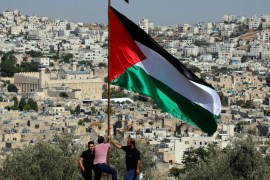 The Palestinians are not powerless. There is much they can do to stop Israeli expansionism. 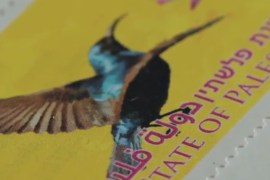 Palestine Sunbird: A Stamp of Defiance

In a creative act of dissent, a Palestinian artist makes a postage stamp symbolising freedom from Israeli occupation.