The United Kingdom’s coronavirus death toll rose 621 in one day to 28,131 – a few hundred below Italy which has so far had the world’s second most deadly outbreak after the United States.

The government said 182,260 people have tested positive for COVID-19, up 4,806 on Friday. But hospital admissions have fallen.

Prime Minister Boris Johnson on Thursday said the country had “passed the peak” of the virus, as he comes under mounting pressure to ease lockdown restrictions imposed in late March.

A review is expected this Thursday and Johnson said the government would outline a plan to lift social distancing measures that would keep transmission rates down.

“The very strong advice today is that moment has not yet come,” Housing Minister Robert Jenrick told a daily briefing announcing the latest figures.

In the meantime, the public should remain at home except to shop for essential groceries, medicine or to exercise, he added.

As the UK shadows Italy for the grim status of being the worst-hit country in Europe, Johnson is facing criticism from opposition parties who say his government stumbled in the early stages of the outbreak.

Johnson, 55, initially resisted introducing a lockdown to restrict economic and public activity, but changed course when projections showed that one-quarter of a million people could die.

Johnson himself battled COVID-19 last month, spending three days in intensive care. He returned to work on Monday, telling the nation that people around the world were looking at the UK’s “apparent success”.

Johnson said the country is over the peak but it is still too early to relax the lockdown he imposed on March 23 because there could be a second peak that he fears might overwhelm hospitals.

The $3 trillion British economy, the world’s fifth-largest, is stalling and Johnson is expected this week to present a possible way to get the country back to work without triggering a second spike in cases.

He has set five tests that must be met before he can lift the lockdown – with a reduction in the daily death toll and prevention of a second deadly peak among the key ones.

Government scientists say while the daily death tolls show a downward trend they expect them to plateau for a while. 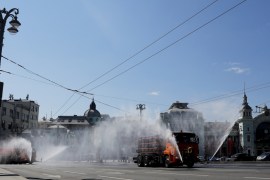 New infections jumped by 9,623 to 124,054 cases in last 24 hours as authorities mull tighter restrictions on movement. 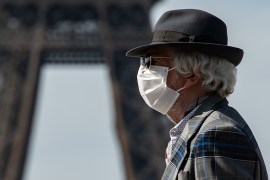 Health minister says emergency will be in place until July 24 and travellers to France will face two-week quarantine.