At least 10 members of the Hashd al-Shaabi forces have been killed in a coordinated attack carried out by the ISIL (ISIS) group in Iraq’s Salahaddin province.

According to Hashd and Iraqi state media early on Saturday, clashes erupted between the paramilitary unit, also known as the Popular Mobilisation Forces, and ISIL on several fronts in the town of Mekeeshfa and the city of Balad.

“The Popular mobilisation forces and security forces have killed and wounded a number of ISIL fighters after being exposed to significant attacks on Balad and Mekeeshfah south of Tikrit,” the Hashd said in a statement later on Saturday.

“The Hashd also lost 10 members, while several others were wounded in clashes between the two sides,” it said, adding that its forces had managed to push back ISIL after the arrival of air and land reinforcements in the area.

According to the Hashd statement, nine members of the Tigris Regiment were killed in Mekeeshfah and two others were wounded, while one member of Brigade 41 was killed in Tal al-Dahab area.

In a statement published by local media, Iraq’s Prime Minister-designate Mustafa al-Kadhimi paid tribute to families of those who were killed.

“It is with great sadness, we received news of the martyrdom of a group heroes from among the Hashd al-Shaabi who died defending their homeland in the face of ISIL attacks in the Mekeeshfah and Balad areas north of Baghdad.”

He also took the opportunity to call on Iraq’s political factions to agree on a new government ahead of his looming 30-day deadline to form a new cabinet by May 9.

“This attack reflects a desperate attempt to capitalise on the state of political rivalry which has impeded the formation of a new government that will work to protect and secure its citizens.”

Al-Kadhimi had announced on Wednesday that he sent his proposed government programme to Parliament in Baghdad, adding that names of candidates for various ministerial posts would be submitted soon. Reports circulated on Friday night of the list of nominees for the majority of the posts.

After two other candidates failed to form a government since Adel Abdul Mahdi stepped down in December last year, Iraqi President Barham Salih tasked al-Kadhimi, the former head of Iraq’s intelligence, with the job on April 9.

The coordinated assault is believed to be one of the largest ISIL attacks since the armed group was defeated in December 2017.

“This was a well organised attack, something of this scale hasn’t been seen at all for two years,” independent Iraqi analyst Sajad Jiyad told Al Jazeera.

The Hashd al-Shaabi, founded as a loose network of Shia-majority factions, played a crucial role in defeating ISIL, which occupied a large swath of territory in Iraq and Syria between 2014 and 2017.

ISIL attacks in Iraq have been on the rise since April compared with previous months this year.

According to Jiyad, the attack’s significance lay in its proximity to Baghdad, its involvement of a large number of ISIL fighters and the sophisticated nature of the attack which used “varied methods.”

“It’s worrying for Iraq that so many of the Iraqi security forces including PMF fighters were killed. It is a reminder that Iraq needs constant counter terrorism efforts and support from the coalition in terms of surveillance and logistical or air support,” said Jiyad.

“If that will no longer be there, then the Iraqi government needs to find a way to replace this in kind through other partners or it needs to step up its own capabilities otherwise ISIL will continue with these attacks,” he added.

The US-led coalition forces in Iraq have withdrawn from several military bases across the country over the past months in line with a plan to consolidate forces in Baghdad and at Ain al-Assad in western Iraq.

According to Zeidon al-Kinani, the attack pointed towards ISIL taking “advantage of the COVID-19 pandemic and curfew [in place], the long deadlock of forming a cabinet…and the increasing divisions within the PMF.”

Last week, four Iraqi militant groups affiliated with Ayatollah Ali al-Sistani, the highest Shia authority in Iraq, announced their withdrawal from the Iran-backed Popular Mobilization Units (PMU) in a move that signified a deepening divide within the group.

According to Kinani, the threat of ISIL may continue.

“The existing protest movement and their preparation to revolt again following the COVID-19 pandemic gives ISIL an opportunity as the government will be facing two fronts: the protesters in the capital and southern provinces and ISIL around the western and northern fronts,” he told Al Jazeera. 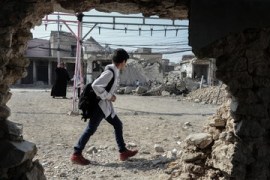 The victory over ISIL is overshadowed by the slow pace of reconstruction and lack of services in the Sunni north. 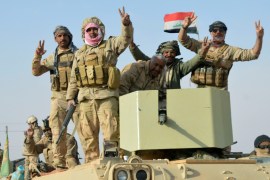 Has ISIL been defeated in Iraq?

Iraqi Prime Minister Haider al-Abadi says the war against armed group is over in the country. 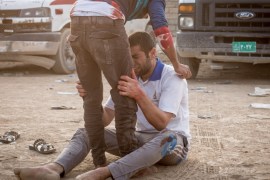