Afghan President Ashraf Ghani and his rival Abdullah Abdullah signed a power-sharing deal on Sunday to end the months-long political crisis, a step that is expected to boost efforts to move the peace process forward.

Abdullah, who had disputed the election result and declared himself president in February, appointed as the chairman of the High Council for National Reconciliation (HCNR) that will hold talks with the Taliban armed group.

The United States had been pushing Afghanistan’s divided leadership to bury their differences and begin the so-called intra-Afghan talks after it signed an agreement with the Taliban on February 29 aimed at ending the 19-year war.

In a joint phone call to Pres. @ashrafghani and I today, @SecPompeo expressed U.S. support & appreciation for the signing of the political agreement that leads to the formation of an inclusive government. 1/2

Abdullah’s group will get 50 cabinet appointments and other provincial governors’ posts as part of the deal.

The US had cut $1bn in aid to Afghanistan after Ghani and Abdullah refused to compromise, with the two leaders holding parallel inaugurations in the capital Kabul.

US Secretary of State Mike Pompeo welcomed the deal. “Secretary Pompeo noted that he regretted the time lost during the political impasse,” State Department spokeswoman Morgan Ortagus said in a statement.

In a repeat of the 2014 election that was marred by irregularities, Abdullah, who served as Afghanistan’s chief executive for the past five years, had disputed the result of the September 2019 vote.

On Sunday, Ghani said it was an “historic day” for Afghanistan and the agreement was reached without any international mediation, referring to the 2014 power-sharing deal that was mediated by the US.

As the head of the HCNR, Abdullah has a big challenge ahead as the deal comes amid rising violence after which President Ghani announced the launch of a military offensive against the Taliban and other armed groups.

A broad political consensus is crucial when Kabul sits face-to-face with the Taliban as part of the intra-Afghan peace talks, Sami Yousufzai, an Afghan journalist who has followed the Taliban, told Al Jazeera.

“In this crucial time when the Taliban are still conducting attacks against government forces and civilians are being killed in attacks claimed by [ISIL], this agreement has strengthened the Afghan government’s position and weakened Taliban’s,” Yousufzai said.

“A tough message goes to the Taliban that despite such political divides, they would all sit unified in front of the Taliban.”

Abdullah’s team called the power-sharing deal “an opportunity for peace”.

“We have said many times before that we are ready for peace, it is our priority, that was our position from the beginning,” Fraidoon Khawzoon, Abdullah’s spokesman, told Al Jazeera.

“The High Council for National Reconciliation lead by Abdullah will now establish a mechanism for peace that will be different from the ones in the past. The council will form committees and peace delegations. The red lines will then determine what needs to be done and on what terms peace is wanted.”

But analysts say challenges lie ahead as Abdullah will now have to build a consensus among the deeply divided Afghan political groups to come to a unified position when facing the Taliban at the negotiating table.

“The agreement did not resolve the core grievances embedded in Afghan politics, and one survey of peace plans put forward by political elites in Kabul found that most were concerned with who will gets seats at the table – suggesting that the wrangling triggered by election issues could easily continue into peace talks,” Andrew Watkins, senior analyst on Afghanistan at the International Crisis Group, told Al Jazeera.

Afghanistan was shaken on Tuesday after attackers stormed a Kabul maternity hospital killing 24 people, including women and babies.

On the same day, at least 24 people were killed and dozens more wounded in a suicide blast at a funeral in Nangarhar province. The attack was claimed by ISIL (ISIS).

The Taliban denied involvement in both attacks but Ghani ordered its military to switch to “offensive mode” against the Taliban and other armed groups.

The armed group carried out a truck bomb attack near a military court in Gardez city, killing at least five people. The Taliban said Thursday’s deadly attack was in retaliation to Ghani’s false accusations against them.

Another major disagreement between the Afghan government and the Taliban is over the prisoner swap – a key part of the Doha agreement. The Taliban wants 5,000 of its prisoners released in one go – a demand the Ghani administration has refused to oblige.

So far, the Afghan government has released 1,500 Taliban fighters while the Taliban has set free 100 government prisoners.

The delay has caused frustration among the armed group. “We reject Ghani’s phased release of prisoners,” Suhail Shaheen, the spokesman for the Taliban, said in March.

Though the Taliban has largely avoided targeting US interests in the wake of the February agreement, it has intensified attacks on government forces.

Watkins said there are clear challenges posed by the Taliban’s continued violence but for now “the worst category of dysfunction and factionalisation of Afghan leaders over peace may have been resolved”.

“What is clear is what this deal managed to avoid: the risk of state or societal fracture, the distraction and uncertainty for government employees and institutions while the two camps were split; and the risk of disunity during the peace process,” he said. 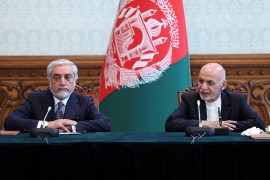 Under the agreement, Abdullah will lead council for peace talks and members of his team will be included in the cabinet. 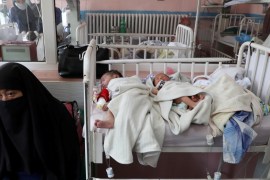 Gunmen killed 24 women, children and babies at a maternity hospital in the Afghan capital, leaving the world in shock.