Hundreds of Iraqis have gathered in central Baghdad for fresh anti-government protests demanding better living conditions and an overhaul of the country’s political system, just days after the formation of a new government.

The gathering in Tahrir Square on Sunday came after Mustafa al-Kadhimi, the country’s new prime minister, promised to release demonstrators arrested during the mass protests that erupted in October last year.

Following his first cabinet meeting, al-Kadhimi on Saturday also pledged justice and compensation to relatives of more than 550 people killed since the start of the popular demonstrations.

The prime minister was Iraq’s spy chief when the protests – the bloodiest in Iraq’s recent history – broke out, and his pledges came as calls spread on social media for renewed demonstrations on Sunday.

Sunday’s protests stretched to other areas, including Iraq’s southern city of al-Nasriya.

Al Jazeera’s Simona Foltyn, reporting from central Baghdad, said the gathering was the “most significant” since March 17, when a curfew was imposed in an attempt to stem the spread of the coronavirus.

“Since then, Tahrir Square has been virtually empty, with a few dozen people remaining in the tents that have been set up here,” she said.

Foltyn reported that “a few hundred people” had gathered in Tahrir Square as of 10:00 GMT, with some manning the barricades on top of Republican Bridge.

“It’s pretty small compared to what we saw in the early days of the protests … but people are still flocking to Tahrir Square so the numbers may rise throughout the day,” she added.

The formation of the new government came some six months after former Prime Minister Adel Abdul Mahdi, who has been leading a caretaker administration, resigned in the face of the mass protests calling for the departure of Iraq’s ruling elite accused of driving the country into dysfunction and economic ruin.

The battle over government portfolios since Abdul Mahdi’s resignation in November last year prevented two previous nominees for prime minister from forming a cabinet and deepening the country’s political crisis.

To earn a vote of confidence in Parliament, al-Kadhimi had to appease the main political parties by letting them pick ministers in his cabinet – an informal yet deeply entrenched power-sharing system known as apportionment.

“Protesters still have demands that go well beyond the appointment of a new prime minister,” Foltyn said.
“They still demand a complete overhaul of the political system and they say that the political parties that are responsible for the failures of the past government are still controlling Parliament.”

Sinan Antoon, an Iraqi novelist, believes that the protests will continue, mainly because al-Khadhimi is the “product of the very same system” that the protestors have been rallying against.

“While releasing the detainees is good, these gestures and any other cosmetic changes are not going to fool the protesters nor quell the protests,” Antoon told Al Jazeera.

“The protests are against decades of corruption and criminality and against a political class beholden to foreign influence and al-Kadhimi is an insider,” he said.

In his speech, al-Kadhimi also promised that all pensions would be paid out in the coming days, rescinding a decision taken by the previous government just before it stepped down that blocked all state spending, including civil servants’ salaries and pension payments – relied on by one in five Iraqis.

“The announcements were quite bold for his first cabinet meeting,” Foltyn said. “It was clear that al-Khadimi was wasting no time to try to mend the rifts between the demonstrators and the government.”

An implosion of oil prices amid the coronavirus pandemic has raised concerns that Iraq will have little option but to impose austerity policies that could give rise to renewed demonstrations.

“Protesters are saying that the will try to mobilise the protest movement again to see actual results,” Foltyn said.

“What remains to be seen is whether the protests will once again gain momentum and reach the same numbers as last year.” 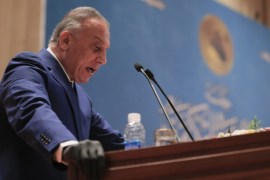 Al-Kadhimi is viewed as pragmatic as well as having good relations with main players across Iraqi political spectrum.