The number of deaths in the United States linked to the novel coronavirus topped 15,000 on Thursday, but officials said that despite the grim tallies, there are signs the pandemic might be nearing its peak in the cities hardest hit early on in the crisis.

More than 451,000 people across the US have been infected with the coronavirus, with more than 15,900 dead, according to Johns Hopkins University.

US officials had warned Americans to expect alarming numbers of coronavirus deaths this week, even as an influential university model on Wednesday scaled back its projected US pandemic death toll by 26 percent to 60,000.

“We are in the midst of a week of heartache,” Vice President Mike Pence said during a White House briefing on Wednesday, but added, “we are beginning to see glimmers of hope.”

US deaths set new daily records on Tuesday and Wednesday with over 1,900 new deaths reported each day.

In the US, New York state has been hardest hit with more than 799 reported on Wednesday, up from 779 a day earlier. The state has recorded 7,067 deaths from COVID-19, the respiratory disease caused by the novel coronavirus, so far.

Hospitalisations down in NY, but guidelines ‘can’t relax’

New York Governor Andrew Cuomo said that despite the high death totals, there has been a sharp drop in the number of people newly admitted to a hospital in the past 24 hours to the lowest level in the coronavirus crisis.

The drop in hospitalisations was a sign that social distancing steps were working, Cuomo said on Thursday, but he warned that now was not the time to relax on the guidelines set by the state and federal government.

Cuomo’s administration had previously said it wasn’t clear on whether face masks are effective.

The US Centers for Disease Control and Prevention (CDC) already recommends cloth face coverings in public settings where social distancing measures are difficult to maintain, as do New York City officials.

The state’s guidance released on Wednesday cites recent studies about the significant number of asymptomatic individuals with COVID-19 who are spreading the virus by even just speaking near others.

Cuomo said he planned to bring in additional funeral directors to deal with the fallout of what he characterised as a “silent explosion” that has sent “ripples through society” and represented the “same evil” that terrorised New York in 2001.

The US’s top expert on infectious diseases echoed Cuomo’s call to not relax on mitigation efforts, despite the signs of improvement.

Dr Anthony Fauci warned on Thursday against reopening the economy too soon in the face of improving data on the coronavirus outbreak, but a third week of massive jobless claims underscored the huge economic cost to social distancing measures aimed at curbing the virus’ spread.

Several officials have hailed the apparent success of mitigation efforts, but Fauci said it was important that people continue to stay home.

“We’ve got to continue to redouble our efforts at the mitigation of physical separation in order to keep those numbers down and hopefully even get them lower than what you’ve heard recently,” Fauci, director of the National Institute of Allergy and Infectious Diseases, said on CBS’s This Morning programme.

Stay-at-home orders that have closed non-essential workplaces in 42 states have drastically slowed the once-humming US economy and thrown millions of people out of work.

With several state unemployment insurance offices deluged in recent weeks, 6.6 million workers applied for jobless benefits in the week ended April 4, the US Department of Labor said on Thursday. That followed 6.9 million jobless applications the week before, the most since the Great Recession of 2008.

In all, some 16.8 million American workers have applied for jobless benefits in the past three weeks.

At the White House briefing on Wednesday, President Donald Trump said he would like to reopen the US economy with a “big bang”, but not before the death toll is headed downward.

Small businesses and workers, particularly in the service industries, were bearing the brunt of the lockdown measures.

The Senate on Thursday failed to push through an additional $250bn of aid intended to help small businesses cope with the economic toll of the new coronavirus pandemic as Democrats and Republicans blocked each other’s proposals.

Democrats objected to a Republican measure for $250bn to beef up emergency loans to small businesses, saying they would back the bill only if it had strings attached and was coupled with a similar amount for hospitals, local governments and food assistance.

Republicans objected to the Democratic initiative, saying only the money in a small business loan programme was at risk of running out now and needed to be replenished. 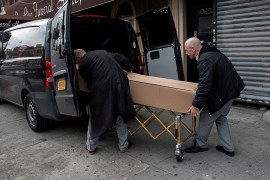 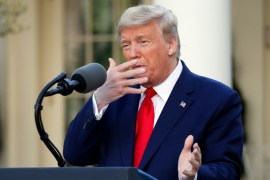 US president defended his actions in the early days of the crisis and played down specific warnings on the contagion.