US Ambassador to South Korea Harry Harris has said privately that he does not plan to stay beyond the November US presidential election, regardless of whether President Donald Trump wins another term, five sources told Reuters news agency.

Harris, a 40-year veteran of the US Navy and Trump appointee who started in Seoul in 2018, has expressed increasing frustration with the tensions and drama of his tenure, the sources said, all speaking on condition of anonymity because of the diplomatic sensitivity of the issue.

“He’s been wanting to stay only until November rather than serving in the second term even if Trump wins it,” one source with direct knowledge of the issue said.

A spokesman for the US Embassy in Seoul did not directly address Harris’s plans, but said the ambassador “remains energised to continue to serve the United States”.

The US State Department did not immediately respond to a request for comment.

Harris’s predecessors each served about three years and generally enjoyed a good personal rapport with South Koreans. But his time in Seoul has been marked by increasing acrimony between the two longtime allies.

The US ambassador has become the public face of what many South Koreans see as overbearing policies embraced by the Trump administration in the name of “America First”.

Although polls show wide South Korean support for the alliance in general, people there have baulked at Trump’s demands that Seoul pay billions of dollars more to support the US troop presence.

The military cost-sharing agreement lapsed in December, and the failure to strike a new deal has led to more than 4,000 South Korean workers being put on unpaid leave.

In October a group of South Korean students climbed over a wall into the grounds of the ambassador’s residence in Seoul to protest against US troops being stationed in the country, sparking complaints from the State Department over lax security by South Korean police.

In December protesters destroyed portraits of Harris during a demonstration outside the US Embassy as they chanted, “Harris out! We are not a US colony! We are not an ATM machine!”

Friction also developed over the US insistence that South Korea limit its engagement with North Korea until Trump had made progress in denuclearisation talks.

And Seoul’s foreign ministry summoned Harris in August after US officials expressed disappointment over its decision to end an intelligence-sharing pact with Japan.

Before being named ambassador, Harris was an admiral leading the US Navy’s Pacific Command.

It is unclear whether Harris has already tendered his resignation, but as part of his retirement plans he has built a house in Colorado, three sources said.

Besides the politics, Harris was also the target of racially charged acrimony over his Japanese heritage.

Born in Japan to a Japanese mother and an American father, Harris faced increasingly personal attacks – even from high-level South Korean officials – as a simmering historic dispute between Seoul and Tokyo erupted again last year.

Some South Koreans mocked Harris’s moustache by likening it to those worn by the Japanese colonial leaders who ruled Korea from 1910-45.

The first source said that Harris never complained about the pressures of the job, but that it had become clear some of the personal attention was weighing on him. 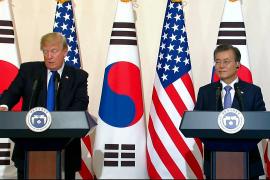 Trump urges North Korea to ‘come to the negotiating table’

US president Donald Trump says his country and its allies are prepared to use military action against North Korea. But says he is open to negotiations to end Pyongyang’s nuclear weapons programme. 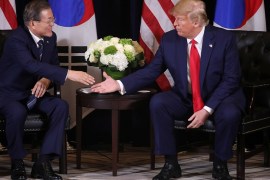 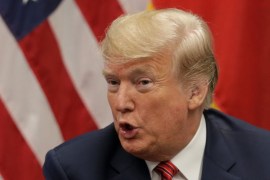