While British Prime Minister Boris Johnson is improving in intensive care as he tries to recover from COVID-19, the situation for many others remains grave as the United Kingdom records its deadliest day since the epidemic began.

Abdul Mabud Chowdhury, a doctor who three weeks ago urged Johnson to provide NHS workers with proper protective equipment, was among the latest victims, dying at a hospital in east London on Wednesday.

In a Facebook post in March, addressed to Johnson, Chowdhury, a consultant urological surgeon, had written that while doctors, nurses and other medical workers were trying to help patients, “we are also human beings practicing our human rights like others to live in this world disease free with our families and children.”

Johnson, 55, was admitted to St Thomas’ Hospital on Sunday evening with a persistent high temperature and cough and was rushed to intensive care on Monday. He has received oxygen support but has not been put on a ventilator.

“Things are getting better for him,” his Culture Secretary Oliver Dowden said on Thursday. “He’s stable, improving, sat up and engaged with medical staff.”

Johnson’s spokesman later told reporters: “The prime minister had a good night and continues to improve in intensive care … he is in good spirits.

“The prime minister thanks the NHS (National Health Service) for the brilliant care which it is providing. The clap for carers has provided wonderful, unifying moments for the entire country.”

So far, hospitals have been stretched but not overwhelmed, But some medics say they are struggling and still have not received adequate supplies of personal protective equipment, or PPE.

“We’re still, by and large, wearing the same equipment that we were a few weeks ago,” said Dr Nishant Joshi, an accident and emergency doctor who works in a hospital north of London.

“We’re getting a higher volume of patients, and they are more unwell and they’re probably more contagious,” he said.

“So it’s fair to assume that the PPE that we were kind of making do with, it was a hit and hope situation, a few weeks ago. It’s fair to say that it’s no longer adequate.”

Meanwhile, Johnson’s government is reviewing the most stringent shut down in peacetime history.

The UK is entering what scientists say is the deadliest phase of the outbreak, with deaths expected to continue to rise over the Easter weekend.

The government’s emergency response meeting, known as COBR, will on Thursday discuss how it should deal with a review on lockdown measures.

Ministers are expected to extend restrictive measures aimed at limiting the spread of infection.

Johnson‘s designated deputy, Foreign Secretary Dominic Raab, will chair the meeting, but no final decision will be made at the meeting. London’s mayor and the Welsh government have said the lockdown would stay in place. 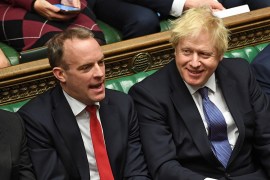 Who is Dominic Raab, the man running UK as Johnson recovers?

Raab has experience in international justice, but controversial statements about feminists and welfare have drawn fury. 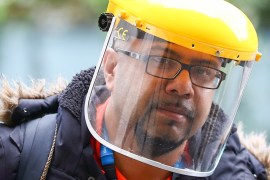 Release of figures comes amid wider concerns coronavirus is exacerbating health inequalities in the country.