While countries across Africa have been closing their borders as part of efforts to contain the coronavirus pandemic, migrants and people on the move are paying a high price.

Over the past two weeks, hundreds of women, men and children have been stuck in Niger, a country that represents a traditional corridor of transit for seasonal labourers from West Africa heading to Libya or Algeria, as well as people hoping to move further to Europe across the Mediterranean Sea.

“We’re being overwhelmed by requests of support,” said Barbara Rijks, Niger director for the International Organization for Migration (IOM).

Deportations from Algeria to Niger have been a continuing trend since late 2016, with figures decreasing last year only to begin growing again from February onwards. The migrants, who were arrested during police roundups in Algeria’s coastal cities and forced to travel for days in overloaded trucks, were usually offered assistance by the IOM to return to their countries of origin.

But now amid the pandemic, they are forced to quarantine in tent facilities set up in the military border post of Assamaka, where temperatures touch 50 degrees Celsius (122 degrees Fahrenheit), or in the southern city of Arlit.

With borders closed all across West Africa, they risk being stuck in Niger much longer than they expected.

“We’re extremely worried,” said Abderahmane Maouli, the mayor of Arlit, a city that hosts one of the six IOM transit centres in Niger and a new facility for those that end their quarantine in Assamaka.

“Despite the border closure, we see that movements are continuing: People travel through minor routes to avoid border controls and reach Arlit without going through the quarantine, and this is a major public health issue for our community,” Maouli told Al Jazeera.

The deportation of more than 8,000 people by Algeria since January this year, he says, had already put local welfare services under strain.

An uncommon push-back operation happened also in late March at the border between Niger and Libya, where a convoy of travellers was intercepted and sent back in the middle of the desert, forcing the IOM to organise humanitarian assistance.

The quarantine of these groups and other travellers – in a makeshift camp set up in record time – fosters worries from both migrants and local communities in a country already standing at the bottom of the United Nations human development index and facing deadly seasonal outbreaks of malaria and measles. Some 1,400 doctors are operational in Niger, according to the government, serving a population of about 22 million.

“A first warning sign,” Rijks told Al Jazeera, “was the arrival of 767 people, half of which foreigners, at the border between Niger and Algeria, on March 19: From that moment on, we registered continuous arrivals and each one of these people needs to quarantine for 14 days.”

Later in March, a convoy of pick-up cars carrying 256 people was pushed-back by Libyan militiamen close to Tummo, a military outpost marking the frontier between Niger and Libya, some 900 kilometres (559 miles) northeast of Agadez, where their perilous desert crossing started.

Blocked in the garrison village of Madama, Nigeriens and migrants mostly from Nigeria, Ghana and Burkina Faso suffered the unmerciful Saharan heat for days before receiving humanitarian assistance by the IOM and Niger’s Civil Protection Department that organised their transfer to Agadez. Their drivers were arrested for breaching anti-smuggling rules.

In Agadez, a once-coveted tourist destination for Europeans willing to explore Saharan dunes, they were lodged in a tent facility set up by the IOM alongside the main sports arena, where football games have been temporarily suspended due to the coronavirus pandemic.

“It’s been a huge challenge, we had to boost our activities in less than one week, adopting hygienic measures in our six transit centres, that are already at full capacity, and opening up new structures to lodge people quarantining,” Rijks said.

Another 44 people were found at Assamaka in the night between April 4-5 and welcomed at IOM’s quarantine site, where Doctors Without Borders (Medecins Sans Frontieres, or MSF) and the International Federation of the Red Cross provide medical and psychosocial assistance.

IOM operations in Niger scaled up after the government enforced anti-smuggling measures in 2015, to prevent migrants from taking dangerous Saharan trails to Libya or Algeria.

In the span of a few years, the number of crossings reduced, from about 330,000 in 2016 to 100,000 in 2018, while hundreds of “passeurs” – the French word for smugglers and middlemen active in the transportation business – were jailed.

As a consequence, more and more people ended up being blocked in the country and turned to the organisation’s voluntary return programmes. From 2017 to early 2020, some 32,000 migrants returned home from Niger with IOM assistance.

“People were usually staying for a few weeks in transit centres, where we arranged travel documents with consulates, before going back to their country of origin, while now they’re stuck in our transit centres and this adds frustrations,” said Rijks.

She hopes that – despite border closures – governments in West Africa will agree soon on organising “humanitarian corridors to return their citizens from Niger”.

While Rijks noted that countries are willing to receive back their citizens, the closure of land and air transportation routes, coupled with the need to set up costly quarantine facilities for returnees on arrival, put more strain on an already fragile logistic organisation.

Currently, 2,371 people – mostly Nigerians, Guineans, Cameroonians and Malians – are lodged in the IOM’s six transit centres, Rijks said, while the size and number of new facilities set up to quarantine migrants are increasing by the day. 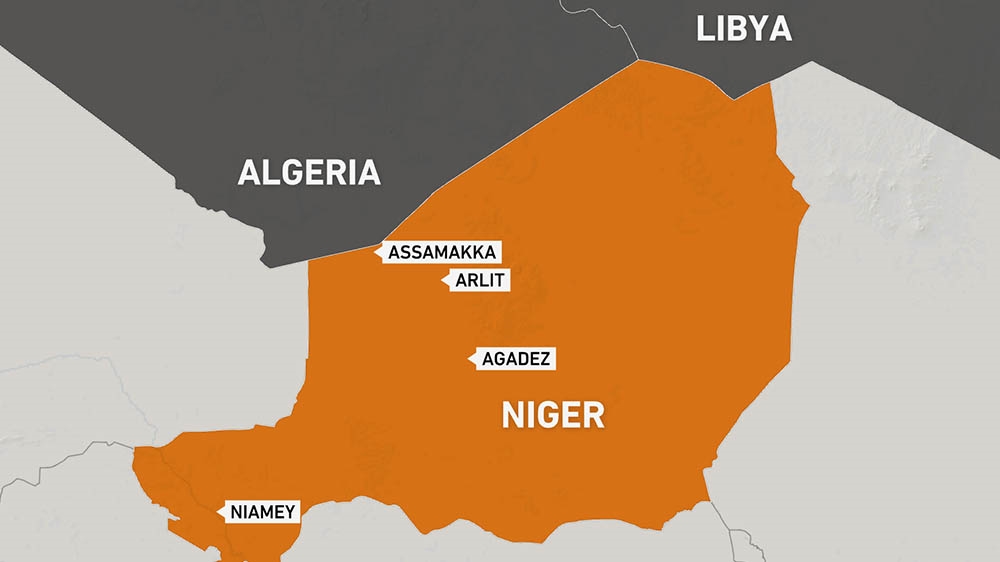 Niger has confirmed 342 coronavirus cases and 11 deaths as of Thursday, with the vast majority of cases found in the capital, Niamey. The country has introduced a series of containment measures to slow the spread of COVID-19, the disease caused by the coronavirus, including the closure of international borders, a ban on gatherings and non-essential activities and a night curfew.

In addition to migrants on the move, humanitarian organisations are particularly concerned about the fate of 420,000 refugees and internally displaced Nigeriens who escaped violence by armed groups along the country’s borders with Nigeria, Chad, Mali and Burkina Faso. These people often live in crowded settlements, where physical distancing is a luxury.

“On top of displacement caused by jihadists, malnutrition risks and socio-economic vulnerability, COVID-19 represents the perfect storm for Niger,” said Alessandra Morelli, country director for the UN’s refugee agency (UNHCR), pointing also at the interruption of evacuation flights for refugees from Libyan detention centres who are temporarily hosted in Niger while awaiting opportunities to resettle to Europe or North America.

Morelli said the programme was launched in 2017 to offer “a vital lifeline” for the most vulnerable refugees detained in Libya.

“We took them out of prisons, brought them here by plane and assisted them in their asylum and resettlement claim.”

About 3,000 people have been evacuated to Niger so far and more than 2,300 resettled to Canada, Germany, Sweden, Netherlands, France and other countries.

All operations are currently suspended.

While the number of coronavirus cases grow by the day, with deepening worries over the effect of a severe outbreak in already fragile countries in the region, some refugees hosted in the reception centre of Hamdallaye started producing soap for local communities.

“It’s a sign of hope in the midst of this situation,” said Morelli, whose WhatsApp account blinks continuously with information on new displacements and violence along Niger’s sealed borders.