US President Donald Trump threatened to freeze American funding to the World Health Organization (WHO), saying it “missed the call” on the coronavirus pandemic, which has so far killed more than 82,000 people around the world.

Trump said on Tuesday the WHO was “very China-centric” in its approach, suggesting the UN agency had gone along with Beijing’s efforts months ago to minimise the severity of the outbreak.

Trump declared he would cut off funding from the United States for the organisation, before backtracking and saying he would “strongly consider” such a move.

The United States is the top donor to the Geneva-based body. US contributions to WHO in 2019 exceeded $400m, almost double the second-largest member-state contribution.

‘Now is not the time’

World Health Organization officials on Wednesday denied it was “China-centric” and said the acute phase of a pandemic was not the time to cut funding.

“We are still in the acute phase of a pandemic so now is not the time to cut back on funding,” Dr Hans Kluge, WHO Regional Director for Europe, told a virtual briefing in response to a question about Trump’s remarks.

Dr Bruce Aylward, senior advisor to the WHO director general, also defended the UN agency’s relationship with China, saying its work with Beijing authorities was important to understand the outbreak, which began in Wuhan, China.

“It was absolutely critical in the early part of this outbreak to have full access to everything possible, to get on the ground and work with the Chinese to understand this,” he told reporters. “This is what we did with every other hard hit country like Spain and had nothing to do with China specifically.”

Trump’s conservatives allies have also increasingly criticised the WHO, accusing the organisation of relying on faulty data from China about the pandemic.

Republican Senator Lindsey Graham, a close ally of Trump, vowed there would not be any funding for the WHO in the next Senate appropriations bill.

“I’m in charge of the appropriations subcommittee. I’m not going to support funding the WHO under its current leadership. They’ve been deceptive, they’ve been slow, and they’ve been Chinese apologists,” Graham said in an interview with Fox News.

Last week, Republican Senator Marco Rubio called for the resignation of WHO Director General Tedros Adhanom Ghebreyesus, saying “he allowed Beijing to use the WHO to mislead the global community”.

“For the Secretary General [Antonio Guterres] it is clear that WHO, under the leadership of Dr Tedros, has done tremendous work on COVID in supporting countries with millions of pieces of equipment being shipped out, on helping countries with training, on providing global guidelines. WHO is showing the strength of the international health system,” he told reporters.

Dujarric added the WHO also recently did “tremendous work” in putting its staff on the frontlines to successfully fight Ebola, an infectious and often fatal disease, in the Democratic Republic of the Congo.

The WHO has praised China for its transparency on the virus, even though there has been some reason to believe that more people died of the disease, also known as COVID-19, than the country’s official tally.

“They should have known and they probably did know,” Trump said of WHO officials.

Health experts have suggested the weekly death totals will reach a new high in the United States this week. More than 12,000 people have died from the virus in the US so far with about 370,000 confirmed infections.

Throughout his presidency, Trump has voiced scepticism towards many international organisations and has repeatedly heaped scorn on the WHO.

In its most recent budget proposal in February, the Trump administration called for slashing the US contribution to the agency to $57.9m, from an estimated $122.6m.

Jeremy Konyndyk, a senior policy fellow at the Center for Global Development, said the last thing the US and the WHO need right now is this sort of a fight.

“It is a distraction from the need to focus on defeating this pandemic,” he told Al Jazeera.

“No virus has a nationality and it is down to how the countries have handled the threat. The core information that was needed to understand this risk was available by the end of January – and it was available through the WHO. That information still is very accurate in terms of transmissibility and lethality of this disease, so that really should have been all for any country to take it seriously,” Konyndyk said.

“In general, I think the WHO has been further ahead of the curve and understanding the risk of the virus than Trump’s own administration has, so I don’t think WHO is to be blamed for the US’s sluggish response.”

The WHO’s current guidance does not advocate closing borders or restricting travel, although many nations, including the United States, have taken such steps.

The WHO declared COVID-19 a public health emergency on January 30, nearly a month before Trump tweeted: “The coronavirus is very much under control in the USA,” and a full 43 days before he declared a national emergency in the US.

Health experts have suggested the weekly death toll will reach a new high in the US this week. Almost 13,000 people have died from the virus in the country as of Wednesday.

Trump also played down the release of January memos from a senior adviser warning of a possible coronavirus pandemic, saying he had not seen them at the time.

Moussa FakiMahamat, chairperson of the African Union, expressed dismay at the US president’s WHO criticism.

“Surprised to learn of a campaign by the US government against the WHO’s global leadership,” he tweeted.

Surprised to learn of a campaign by the US govt against @WHO’s global leadership. The @_AfricanUnion fully supports @WHO and @DrTedros. The focus should remain on collectively fighting #Covid19 as a united global community. The time for accountability will come. 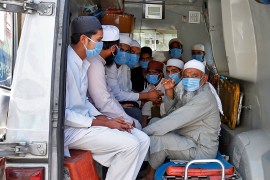 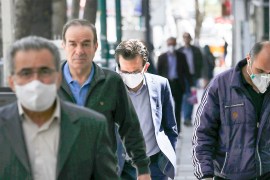 Ali Shamkhani says US sanctions imposed on crucial medical equipment are ‘illegal’ and an ‘inhumane act’. 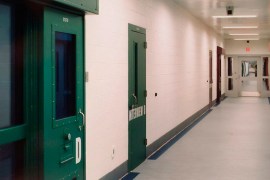 US: Calls grow to release detained youth amid coronavirus crisis