Medan, Indonesia – On April 1, Rajiman Sormin officially retired after 12 years as a mortician at Adam Malik Public Hospital in the Indonesian city of Medan. He was looking forward to it and, having dedicated much of his life to washing, embalming and dressing the dead, he had planned to spend more time with his family.

But now Sormin’s plans may be thrown into disarray.

As Indonesia’s coronavirus death toll keeps climbing, he fears that he may be recalled to help deal with the growing numbers of victims.

Indonesia now has one of the highest COVID-19 mortality rates in the world at about 9 percent, according to the Indonesian Disaster Mitigation Agency (BNPB), slightly lower than Italy.

On Wednesday, Health Ministry spokesman Achmad Yurianto said 170 people had died of the virus since March 2, and 1,790 have tested positive for the illness. There are concerns the numbers could be much higher as provincial statistics often conflict with those released by the central administration.

Among the dead have been some of those on the front lines, including two hospital directors and 12 doctors, according to the Indonesian Medical Association (IDI). One of those doctors was Ucok Martin from Medan, a friend and colleague of Sormin’s.

“He was so friendly, and he was always helping patients and their families if they couldn’t afford treatment,” he said. “Some days, he would offer to buy me lunch and would encourage me to order more food to take home with me. He knew I didn’t earn much money as a mortician.”

In a cruel twist of fate, Martin was a pulmonary doctor. It is unclear where he contracted COVID-19, as he had just returned from a trip to Jerusalem, with a connection through Malaysia, but had gone back to work at Adam Malik Public Hospital before being taken ill.

“He had an x-ray initially which was clear,” said Sormin. “When they x-rayed him again a few days later, the entire x-ray was white. His lungs had been overtaken by the virus. It was not fair. He saved so many people with lung conditions, and that’s what killed him.”

Questions have been raised about how to keep front-line workers safe in Indonesia, where there is a chronic lack of personal protective equipment (PPE), with reports that some doctors and other medical staff are having to improvise with things like plastic raincoats and bin bags.

“Indonesia isn’t serious about taking transparent and effective steps to handle this pandemic,” said Usman Hamid, who heads Amnesty Indonesia. “If this is allowed to continue, the number of deaths of patients and medical staff will continue to rise. This could be a humanitarian crisis, especially for the healthcare sector.”

While Sormin is ready to go back to work if he is needed, he also points out that his duties would require re-training in light of the current circumstances.

“The process for preparing bodies is different now,” he explained.

Indonesia has ordered all suspected or confirmed coronavirus victims to be buried within four hours of their death, the bodies wrapped in three layers of plastic sheeting and then encased in a plastic body bag.

Families are not allowed to see their loved ones or open the body bags at any time before burial, but they can request that their family member be placed in an additional wooden coffin provided by the hospital.

‘We sleep while we can’

As a result, Medan’s funeral parlours have noticed a slump in business.

Mohammad Khairul Harahap, who works as a coffin maker, told Al Jazeera that they usually sell 60 coffins a month, but now that number has declined dramatically as public hospitals insist that confirmed or suspected coronavirus patients be buried in coffins provided in-house.

However, he said he received orders for coffins from a number of families of people who had died at private hospitals in the city and had yet to test positive for COVID-19 despite having all the symptoms, including foreigners.

“One coffin we sold was for a suspected coronavirus patient who was a tourist,” Harahap said. “He was so tall that we had to make a special large casket for him.”

Harahap said funeral parlours knew when a deceased was a suspected COVID-19 case because the body would be wrapped in plastic, although, without a coronavirus test, the deaths do not seem to be included in the official count.

It is similar elsewhere in the country, including in the capital, Jakarta, where governor Anies Basewdan told the media on March 30 that 283 people had been buried according to coronavirus stipulations, even as the BNPB put the death toll for the entire country at 170 on April 2.

While business may be slow at the moment, Harahap said he is preparing for an inevitable increase in demand as the number of deaths rises and Adam Malik Public Hospital runs out of coffins. As such, the funeral parlour has increased production of caskets – made of lacquered durian and jackfruit wood – which are being stacked in an upstairs room of the funeral parlour.

“At the moment, it’s so quiet that we often take a nap in the coffins in the afternoon as there is nothing else to do. We sleep while we can, because that may all change soon.” 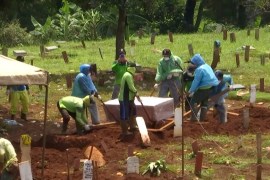 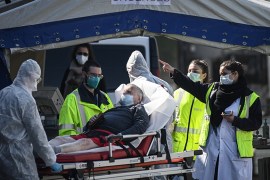 Whether millions live or die depends on the decisions the world’s leaders take in the coming days and weeks.