The announcement by Yemen’s secessionists that they will establish southern self-rule in regions under their control may have placed the war-ravaged country on an irreversible path towards perpetual conflict.

The announcement by the UAE-backed Southern Transitional Council (STC) does not establish new realities on the ground because it has unilaterally governed the southern provinces and Yemen’s key port city of Aden since 2015, after it expelled the internationally recognised but powerless government of President Abd-Rabbu Mansour Hadi.

In a statement on Sunday, the STC declared a state of emergency and said it would “self-govern” Aden and other southern areas.

Yemen’s civil war erupted late in 2014 when the Iran-aligned Houthi rebels seized the capital, Sanaa, along with much of the country’s north and overthrew Hadi’s government.

Nominally, both the Hadi government and the STC are part of the “Arab coalition” fighting against the Houthis.

However, Hadi’s government is mainly supported by Saudi Arabia, where it operates, while the STC and its leaders are based in the United Arab Emirates.

The STC’s move shows how divergent the objectives of Saudi Arabia and the UAE are in Yemen. Both are the main members behind the military alliance that has waged war in Yemen to drive the Houthis from power since early 2015.

A Saudi statement on Monday rejected the separatist group’s declaration of self-rule in Yemen’s south, demanding “an end to escalatory actions” and a return to a peace deal signed in November last year.

It urged all parties to honour the power-sharing Riyadh agreement – signed between Hadi’s government and the STC in the Saudi capital – in an effort by Saudi Arabia to halt fighting between the two nominal allies.

Conspicuously absent from the statement, however, was any reference to Yemen’s territorial unity – indicating Riyadh’s lack of opposition to the ultimate division of Yemen.

On the surface, Saudi Arabia and the UAE share the strategic objective of preventing their archenemy Iran from securing a foothold in their back yard on the Arabian Peninsula through their Houthi allies.

Both, however, have different visions of Yemen’s future.

As a unified nation of about 28 million people, Yemen is the second-most populous country in the Arabian Peninsula after Saudi Arabia. With proven oil reserves and strategic ports, it has the potential of becoming a regional power if it stabilises, becomes democratic, and reduces its dire poverty, analysts say.

Despite its potential, Yemen remains the poorest Arab nation and state functions – especially its war-devastated healthcare system – are teetering on the brink of collapse. Yemenis throughout the country are suffering from desperate poverty and lack the ability to fight the spread of coronavirus because of the five-year conflict.

The UAE shares Saudi Arabia’s fear of a long-term Iranian presence on their borders through Tehran’s Houthi allies.

The UAE’s sub-strategy, however, appears to be to eventually recreate a south Yemen state by pumping money and weapons, along with providing military training and political support, to its southern separatist allies.

“The first is to divide Yemen and the second is to destroy the al-Islah party,” he said of the largest Islamist political faction in Yemen with ties to the Muslim Brotherhood, which is currently the main group fighting the Houthis in the north.

“None of the Gulf nations was really supportive of Yemen’s unity in 1990, especially Saudi Arabia,” Gasim told Al Jazeera.

“Unlike the UAE, Saudi Arabia cannot extract itself from Yemen so easily because it considers it part of its sphere of influence in the region. Saudi Arabia’s main objective in Yemen is to maintain it as a weak state beholden to its objectives.”

The best Saudi Arabia can hope for now is to keep Yemen in a “low-grade” conflict that will maintain its weakness and prevent it from threatening Riyadh’s regional hegemony, Gasim said.

STC spokesman Nizar Haitham told Al Jazeera over the phone from Aden the “south has had a cause since 1994”, when the nascent secessionist movement was crushed by the north and unity was enforced.

“Since the Islah party [the main faction of Hadi’s government] failed to liberate the north, it now tries to invade the south and this is unacceptable to the southerners,” he said.

Commenting on the latest “self-rule” announcement, Haitham said the move would bring southerners closer to their objective of establishing an independent state.

“We are determined to restore sovereignty over our territories and any step on the ground that brings us closer to that goal would be welcomed by the people of the south,” he said

Gasim said the current fighting presents a golden opportunity for the UAE to realise its goal and divide Yemen.

“The UAE wants to create a vassal state in the south and prevent the port of Aden from becoming a hub for international shipping lanes jeopardising the viability of its own ports in the contentious Gulf,” he said. 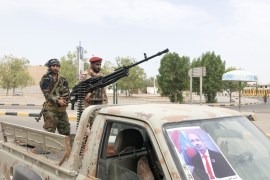 STC forces said an agreement to end the standoff in the southern city could be signed imminently.