Athens, Greece – Greece has quarantined a refugee camp in the mainland, home to 2,300 people, for at least two weeks after 20 residents tested positive for COVID-19.

Greece’s Ministry of Migration announced on Thursday that movement from the Ritsona camp will be heavily restricted and monitored by police.

All of those who tested positive showed no symptons, the ministry said.

The measures came as authorities tested dozens of people in the camp after a woman, who had been living there, was found to have the infection as she gave birth in a nearby hospital last week – the first recorded case of a refugee contracting COVID-19.

Health officials are currently investigating the source of the infection, and are testing more camp residents to establish how many have the virus.

The International Organization for Migration (IOM), one of the official actors in Ritsona which will continue to have a presence during the quarantine, was attempting to protect the site located some 70 kilometres (43 miles) north of the capital, Athens, from a more serious outbreak.

An IOM spokesperson told Al Jazeera they would begin to distribute food baskets and hygiene kits to camp residents, adding that people would continue to have access to medicine.

The spokesperson added that there would be a heightened police presence around the camp to ensure the lockdown measures were adhered to.

The cases come amid growing calls from NGOs, doctors and academics for the European Union to evacuate refugee camps during the coronavirus pandemic.

Thousands in Greece live in packed and squalid camps, and are therefore at high risk.

Kayvan Bozorgmehr, a doctor and professor from the School of Public Health at Bielefeld University in Germany, told Al Jazeera the conditions in Greek refugee camps were potential hotspots for the virus to spread.

“Refugees in camps are at high risk of acquiring infectious diseases due to crowded conditions with poor hygiene and sanitation,” said Bozorgmehr, who is among the academics calling for the evacuation of Moria, Greece’s notoriously overcrowded camp on Lesbos island.

“It is very likely that refugees will become infected with the … virus in host communities or in hospitals. An uncontrolled spread in camp contexts, such as those on the Greek islands, may lead to a public health disaster as measures of social distancing and quarantine are impossible in these settings.”

The first case of COVID-19 was confirmed on Lesbos island three weeks ago, affecting a Greek national.

As yet, there are no confirmed cases in Moria, which hosts nearly 20,000 people in a space designed for just below 3,000.

Parwana Amiri, a 16-year-old from Afghanistan living in Ritsona, has been raising awareness among the camp residents in anticipation of an outbreak.

“Refugees have to know how to protect themselves against the virus,” she told Al Jazeera, adding that everyone she knew was worried.

“As young people, we have the most important role in the family.”

Amiri encourages others her age to talk to their family members about the best way to wash hands to prevent transmission.

“This virus does not have any borders and treats all equally,” she said. “While you stay at home, we have to stay in the camp where there is no guarantee of health safety.”

In response to calls to decongest the islands, Greece’s Ministry of Migration has offered a series of what they say are preventive measures.

These include effective lockdowns of the island camps and in Moria, only 100 people an hour are permitted to leave. Any remaining NGOs have to submit a list of staff who will be working in the camp.

Mainland camps such as Ritsona were already subject to measures in line with the rest of the country’s population.

For instance, everyone in Greece must now provide a form detailing one of six reasons to be outside, and carry identification.

As of Wednesday evening, Greece had 1,415 confirmed cases of the virus and a total of 50 deaths. 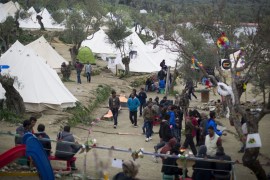 Time is running out to protect refugees from a coronavirus crisis

COVID-19 could prove devastating for internally displaced children. The international community must step up to help. 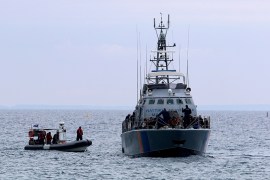 Cyprus pushes Syrian refugees back at sea due to coronavirus

About 200 Syrian refugees are stranded in northern Cyprus after a harrowing standoff with authorities on the sea.