Hundreds of people have taken to the streets across large cities in Brazil, snarling traffic as they denounced pandemic lockdown measures opposed by President Jair Bolsonaro.

Protesters in trucks, cars and motorcycles, some wrapping in the country’s green and yellow flags, honked horns in the streets of Rio de Janeiro, Sao Paulo and the capital of Brasilia on Saturday, calling for governors to resign over measures that have forced most businesses to close for weeks.

Bolsonaro has been a fierce critic of the states’ stay-at-home measures, arguing that the economic harm could be more damaging than the illness.

The protests took place a day after Bolsonaro fired his health minister, Luiz Henrique Mandetta, who had been promoting isolation measures.

In Rio de Janeiro, about 100 vehicles took part in the gridlock, cruising down Atlantica Avenue, along the iconic and temporarily shut down Copacabana beach.

“Either we just have the pandemic, which is already a lot, or we have the pandemic and chaos,” said Anderson Moraes, a state legislator who had called for Rio residents to join the protest. “For sure, lives are more important than anything else, but we can’t take decisions today without thinking about tomorrow. Because tomorrow, I don’t know how a family man will be when he sees his children going hungry.”

In Brasilia, Bolsonaro reiterated his intention to start reopening the economy.

“The fear was excessive,” he said on Saturday, denouncing the “greed” of politicians “who have shut down everything and created panic”.

“People want a return to normality,” the president said in a Facebook Live session shortly before meeting with a small crowd of supporters who had gathered outside the Planalto presidential palace. “We’re going to start adding more flexibility.”

Brazil has the most confirmed COVID-19 cases in Latin America – more than 36,500 – and at least 2,347 deaths. That is a relatively low number in relation to the country’s population of 211 million, but the outbreak’s peak is expected in May.

The pandemic that began in central China in December is believed to have infected more than 2.3 million people worldwide. At least 155,000 people have died, according to a tally by Johns Hopkins University.

Many countries are testing only the most serious cases and the number of confirmed infections is likely to be a fraction of the true total.

Governments are under pressure to reopen factories, shops, travel and public activities even as numbers of infections rise across most of the globe.

Shutdowns that began in China in late January and spread to the United States, Europe and elsewhere have wiped out millions of jobs, plunging the world into its most painful economic slump since the Great Depression of the 1930s.

The International Monetary Fund expects the global economy to contract by an unprecedented 3 percent this year – a far bigger loss than 2009’s 0.1 percent after the global financial crisis.

The president on Twitter urged his supporters to “liberate” three states with Democratic governors.

Texas, Indiana and some other states have announced plans to allow some retailing and other activity to resume. Florida and South Carolina are reopening beaches.

Most Americans, by two-to-one, disagree with the protesters, however. A new Pew survey found that most were more concerned about ending home confinement too soon rather than too late.

“We are not at a point when we are going to be reopening anything immediately,” Cuomo told reporters.

Mounting evidence suggests that social distancing slowed the pandemic after more than half of humanity – 4.5 billion people – were confined to their homes.

Some countries – Spain, Japan, the United Kingdom and Mexico – have extended restrictions on movement.

But others are loosening restrictions amid signs the outbreak could be easing.

Switzerland, Denmark and Finland reopened shops and schools this week. And Germany, which has declared the virus “under control” after 3,400 deaths, allowed some shops to reopen and will let some children return to school within weeks.

Parts of Italy began emerging from lockdown too, with Venice residents strolling around quiet canals.

Iran also allowed some businesses in the capital, Tehran, to reopen on Saturday despite the Middle East’s deadliest outbreak. 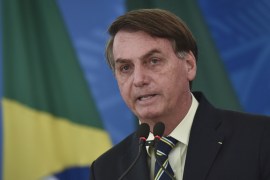 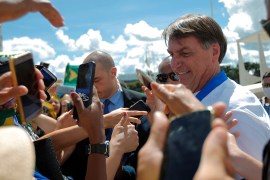 Deny and defy: Bolsonaro’s approach to the coronavirus in Brazil