On learning about the global coronavirus pandemic, those displaced by conflict in Myanmar’s Kachin state wasted no time in taking measures to keep the virus from reaching their camps.

“As we are staying in crowded conditions, if one of us gets the virus, an outbreak is very likely,” said Galau Bawm Myaw, a camp leader in Jaw Masat internally-displaced people (IDP) camp on the outskirts of the state capital, Myitkyina.

“We advise people to follow [Ministry of Health] guidelines to keep ourselves healthy, and we put our lives in God’s hands.”

While Myanmar’s capacity to prevent and address a COVID-19 outbreak nationally remains a concern, the country’s 240,000 IDPs find themselves at increased risk. Among them are 100,000 ethnic Kachin who remain scattered across 138 camps and church grounds in Myanmar’s northernmost state, which shares a border with China.

Most fled their villages shortly after a ceasefire between the Kachin Independence Army and Myanmar military collapsed in 2011.

On April 1, the Office of the United Nations High Commissioner for Human Rights called on governments to step up measures to protect the world’s 40 million IDPs from the disease, describing IDPs as “among the most vulnerable”.

In Jaw Masat, with a population of more than 600 people, camp leaders placed restrictions on entry and exit in March, prohibited group gatherings, and partitioned the learning centre into individual prayer rooms to replace church services.

They also built a hand-washing station at camp gates and designated a bamboo hut at the camp’s perimeter as a quarantine facility, where those returning from cities or abroad must stay for 14 days. When visitors came to give health information or donations, they also sprayed the visitors and their vehicles with a chemical disinfectant.

IDPs living in Bethlehem camp in Myitkyina, which houses more than 700 people, have taken a similar approach.

Both camps play a recording of the Ministry of Health COVID-19 prevention guidelines daily over loudspeakers – guidelines which IDPs are following carefully. “I stay with my family at home as much as possible and we practise proper personal hygiene,” said Kumbu Seng Gu of Jaw Masat. “We are doing our best to protect ourselves.”

Yet IDPs worry that their efforts will not be enough.

Families are crowded into bamboo shelters, with multiple families in each; a few toilets are typically shared by hundreds of people. Humanitarian assistance has been dwindling for years, and most rely on daily wages to meet their basic needs.

“We have to live in crowded conditions and lack nutritious food, while the government’s instructions are to avoid crowds and eat nutritious food,” said Seng Gu, adding that camp residents were running out of money to buy basic hygiene items.

“As we can’t practise social distancing, lack medical supplies and food, I fear the outbreak and pray to God to overcome this.”

Amid increasing concerns, on April 8, camp leaders in Myitkyina and Waingmaw townships instituted a total lockdown and padlocked their gates.

Seng Gu hopes the government will come to the IDPs’ aid. “I want the government to donate food and medical supplies to IDPs, and to put us as a priority,” he told Al Jazeera.

Myanmar’s state media reported on March 24 that a national plan for IDP camps was being prepared, but no updates came until April 14, when state media announced the Ministry of Social Welfare, Relief and Resettlement had begun implementing a plan for the prevention and containment of COVID-19 in IDP camps, in collaboration with UN bodies, international and local aid groups, donors and other government ministries.

The plan covers IDPs in Shan, Rakhine, Karen and Chin states, in addition to Kachin.

“The Ministry of Social Welfare, Relief and Resettlement is not neglecting or ignoring to protect, contain, or treat COVID-19,” the announcement said, adding that the plan includes awareness-raising, emergency planning, social support, mask, digital thermometer and soap distribution, and one-time financial assistance of 20,000 kyats ($14) to the elderly, as well as pregnant women and infants in some areas.

A representative of the ministry told Al Jazeera that implementation of its COVID-19 IDP response plan had begun before the announcement and that the ministry had reached most IDP camps in Kachin with basic support.

That does not include camps in areas under the control of the Kachin Independence Organization, which has its own COVID-19 response committee. The Myanmar government has blocked UN humanitarian access to KIO-controlled areas since 2016. The Ministry of Social Welfare, Relief and Resettlement and the KIO’s COVID-19 committee have no official contact, said the representative.

When Al Jazeera interviewed IDPs in Jaw Masat and Bethlehem before the camp leaders instituted a lockdown on April 8, they said government workers had visited to provide health information; in Bethlehem, they said each family was given a bar of soap. Both camps lacked a digital thermometer at that time.

Aoife McDonnell of the UN High Commissioner for Refugees (UNHCR) Myanmar told Al Jazeera she welcomed the inclusion of IDPs in national response efforts. “Our main priority is to ensure that the people we serve, including internally displaced persons, are included in national response plans,” she said.

Yet some worry that the support coming is too little, too late.

“Waiting for the Myanmar government to get ready will be simply too late.”

Local church groups and the Kachin public have filled a critical gap. The Kachin Baptist Convention, which manages many IDP camps and has long played a leading role in Kachin’s humanitarian response, released its COVID-19 response plan, including provisions for IDP camps, on April 1.

They have since provided prevention education, disease surveillance, and material assistance in the form of handwashing stations, personal protective equipment and medical supplies.

Members of the Kachin public also formed a COVID-19 Prevention Network focused on IDP camps, through which they provided similar services, and also sprayed camps with disinfectant.

Yet food insecurity – already a concern prior to the lockdown – remains a critical need.

Some members of the public have stepped in donating food in the absence of government support with IDPs’ food needs.

“People are mentally unwell because they are worried about their livelihoods as well as a virus outbreak,” said Nhkum Tang Ra of Bethlehem camp.

“So far, we haven’t yet faced severe food shortages, but if this virus lasts past the end of April, it could get much worse,” added Bawm Myaw. 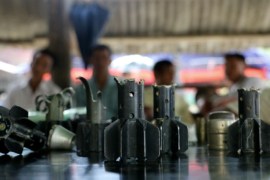 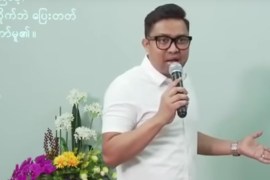 At least 22 of the 94 recorded cases in Myanmar were traced to the religious gathering hosted by Pastor David Lah.