Sudan’s capital Khartoum has been placed under a three-week lockdown following a sharp increase in coronavirus cases.

The decision came as the country’s Federal Ministry of Health on Saturday reported 30 new cases over the past 24 hours, bringing the total number to 66.

“Twenty-seven of these cases were reported in Khartoum state, while for the first time two cases were confirmed in White Nile state and one in Gazeera state,” the ministry said in a statement.

The total deaths from the coronavirus in the country rose to 10, as four more people died in the past 24 hours, it added.

Khartoum has more than 90 percent of Sudan’s reported coronavirus cases.

An outbreak in Sudan would severely strain the health system, which has been weakened by decades of civil war and sanctions.

Authorities have also banned Friday prayers in Khartoum mosques, a measure taken by several other countries in the region.

Al Jazeera’s Hiba Morgan, reporting from Khartoum, said while the lockdown is in place, people will still be allowed to go out for a few hours every day to get essentials but strictly within their neighbourhood.

“[The government has] put the military, police and security forces on each bridge to make sure people don’t cross from one part of the capital to the other,” she said, adding that the government has said it is facing severe shortages in testing kits and personal protection equipment (PPE) for healthcare workers.

“The prime minister has made a plea to the UN to make sure that it supports the government to be able to combat the disease,” she said.

“We know from the UN economic commission that there will 300,000 people in Africa that will suffer and die from the coronavirus and we know that Sudan will be one of the countries affected because of the infrastructure.” 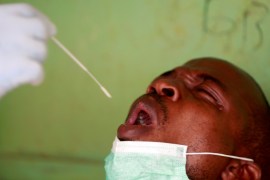 Experts warn fragile healthcare systems in many nations could be overwhelmed in the face of a severe COVID-19 outbreak. 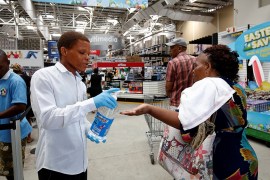 Africa coronavirus cases could hit 10 million in six months: WHO

COVID-19 cases on the continent may shoot up from thousands to millions if models are accurate, UN health agency says.