The United Nations Security Council on Friday endorsed the secretary-general’s call for the warring parties in Yemen to immediately stop fighting and focus on reaching a peace agreement and countering the outbreak of the coronavirus.

The UN’s most powerful body welcomed the unilateral, two-week ceasefire announced by the Saudi-led coalition that went into effect April 9 to support the UN-led peace process and Secretary-General Antonio Guterres’s call for a truce.

Despite the announcement, violence in Yemen has been reported by both the internationally-recognised government, backed by the Saudi-led coalition, and the Houthi armed group, formally known as Ansar Allah, believed to be backed by Iran.

On Friday, the Houthis’ military command accused the coalition of violating the ceasefire 82 times over the past 24 hours, with air attacks on the central province of Marib and artillery attacks in the port city of Hodeidah, the country’s main gateway for humanitarian aid.

Yemeni tribal leaders said government forces retook the large Khanjar military camp in the strategic northern Jawf province, which they had lost to the Houthis earlier this month. The leaders spoke on condition of anonymity for fear of reprisals.

The council statement followed a briefing on Thursday by UN Special Envoy for Yemen Martin Griffiths, who said the threat of COVID-19, the illness caused by the new coronavirus, has galvanised peace efforts.

Griffith said talks with the warring sides “are making very good progress” and that he expects them to adopt proposals for a nationwide ceasefire and peace talks “in the immediate future”.

But Mohamed Abdel Salam, a spokesman for the Houthis on Thursday said the current UN proposal neglects their key demand – to lift Saudi Arabia’s land air, and sea blockade, which aid officials partly blame for driving the country’s humanitarian crisis.

“Dialogue under fire and siege is only a strong-arm tactic that works in the interest of the military option,” Abdel Salam said.

Doha-based Yemen analyst Saeed Thabit told Al Jazeera that both parties, the government as well as the Houthis, have lost credibility when it comes to ceasefire agreements.

“The real problem here is that both warring parties are not basing their decisions on the humanitarian needs of the people of Yemen,” he said.

Thabit argued that the UN seems to be dragged along in the political games both parties are playing at the expense of Yemeni people.

The Security Council “voiced concerns about the ongoing hostilities”, calling on the Houthis to commit to a ceasefire “without delay”, and urged both parties “to engage constructively” on Griffiths’s proposals and to reach an agreement “as soon as possible”.

The outbreak of the coronavirus in Yemen, which reported its first case earlier this month, threatens deeper and more widespread suffering in the Arab world’s poorest country, engulfed by civil war since 2014, when the Houthis took control of the country’s north, including the capital, Sanaa.

The Saudi-led military coalition intervened against the Houthis the following year, conducting relentless air raids that have killed thousands of people. The more than five-year blockade imposed by the Saudi-led coalition has caused a humanitarian disaster.

Council members underlined “the vital importance” of access to humanitarian and economic aid for Yemenis in need, which is “especially important in light of the COVID-19 pandemic“.

The World Health Organization estimated that 80 percent of health services provided through the UN “could stop at the end of April”, Under-Secretary-General for Humanitarian Affairs and Emergency Relief Coordinator Mark Lowcock said, adding that UN agencies estimate they need more than $900m to continue their work through July. 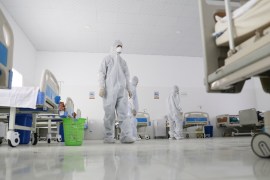 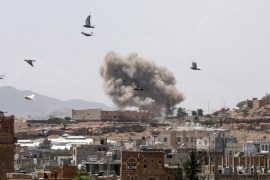 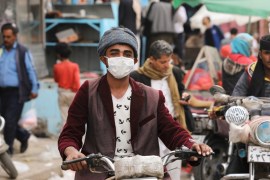 Could the coronavirus pandemic provide relief in Yemen?

The United Nations has called for a ceasefire on the fifth anniversary of Yemen’s civil war.