Authorities in several countries, including the United States, Italy, Spain, France and Canada, have launched inquiries into how elderly care facilities have responded to the coronavirus crisis after reports emerged of high death rates at those facilities.

The pandemic has put a spotlight on nursing homes across the world, where thousands of elderly residents, who are most vulnerable to the disease, are believed to have died after contracting it.

To date, more than 2.25 million people have been infected worldwide with COVID-19 and at least 154,000 have died due to the pandemic.

As governments continue the struggle to bring the pandemic under control, the accounting of the elderly residents of nursing facilities who have been infected or died from COVID-19 remains fragmented – the result of overburdened health authorities and a dearth of widespread testing early on in the outbreak.

In March, Spain’s state prosecutor launched an investigation after soldiers found elderly patients abandoned or dead in retirement homes in the country.

In the US, the governor of the state of New Jersey on Thursday ordered a probe into a nursing home in the town of Andover, where 17 bodies had been found in a makeshift morgue.

In the Canadian city of Montreal, officials are investigating after health authorities were called to the Residence Herron elderly home, which had been largely abandoned by the staff.

Responders found residents dehydrated, unfed for days and lying listlessly in bed, some covered in excrement. The deaths of two residents had gone unnoticed for several days.

Moira Davis, whose father Stanley Pinnell died at the facility on April 8, told the AFP news agency she was sick to her stomach when she learned of the conditions.

“All of a sudden these questions started flying through my head: ‘What could we have done differently? Why did nobody tell us?'” she said. “Why, why, why?”

Marylouise McLaws, an infectious disease expert and professor at the University of New South Wales, told Al Jazeera the toll on residents of elderly homes globally is “only just coming to light”.

“[Elderly home residents] are incredibly vulnerable because they’re within a situation that we would call a super spreading environment: Being kept inside an age care facility, often sharing rooms, having common dining rooms,” she said.

“We really need to look after our most vulnerable in the community, regardless of which country we’re talking about. There is no acceptable explanation for this.”

A report released by academics at the London School of Economics (LSE) on April 15 said between 42 percent and 57 percent of deaths from the coronavirus in Italy, Spain, France, Ireland and Belgium have been linked to care homes for the elderly.

The report notes those figures are based on partial data. Meanwhile, several countries had no such data available, researchers said.

In Italy, the country’s National Institute of Health estimated that 40 percent of the 6,773 residents in elderly care facilities who have died since February 1 had been diagnosed with COVID-19 or were showing symptoms. That number is only a fraction of the country’s nursing home death total, as the survey was based on data from a third of some 3,000 nursing homes contacted.

In a dramatic scene on Friday, the Italian military blocked off one facility in Rocca di Papa outside of Rome after 118 patients and 30 healthcare workers tested positive for the coronavirus. At least five patients had died there.

“Inside it’s a ghost town,” Luciano Bambino, a funeral home worker who emerged from the home with a body in the back of his hearse, told the Associated Press news agency.

In neighbouring France, the regional public health authority has launched an investigation into why so many people died at a nursing home in Cote D’Azur.

At the La Riviera nursing home, 36 of the 109 residents had died from coronavirus-related illnesses after the first infection was confirmed at the home, according to the local mayor’s office, which registers the deaths.

Experts have said the deaths underline the need for blanket testing at such facilities, where staff attempted to isolate those believed to be infected, but where systematic testing was not implemented for 20 days.

“Maybe if we had been able to test from the beginning, everything would have been different,” Florence Arnaiz-Maume, an official with the National Union of Private Homes and Facilities for the Elderly (SYNERPA), told the Reuters News Agency.

The first two deaths reported in the US from the coronavirus were residents at the Life Care Center of Kirkland, an elderly home in Washington state.

Since then, officials have said at least 35 coronavirus deaths have been associated with the facility, which faces a federal fine of more than $600,000 after investigators determined the home did not have a proper system in place to deal with the outbreak and did not respond properly.

While the federal government has not released a national tally, a count by the AP news agency has linked 6,912 coronavirus deaths to nursing homes in the country.

A report released by authorities in New York on Friday, which according to the AP news agency tally accounts for 40 percent of coronavirus deaths linked to elderly homes in the country, said at least 55 residents at one nursing home in Brooklyn had died from COVID-19.

Four other facilities reported at least 40 deaths related to coronavirus, while 19 listed at least 20 deaths.

“Every death is heartbreaking,” Dr Roy Goldberg, medical director at Kings Harbor Multicare Center, a 720-bed home in New York City borough of the Bronx which reported 45 fatalities, told the AP news agency. “These have been surreal times.”

In neighbouring Connecticut, a similar list released on Thursday said nursing home residents account for 375 of the state’s 971 deaths as of that point.

McLaws said even after the government completed their initial count, the toll in nursing homes is likely to rise further, while many coronavirus deaths will never be properly reflected.

“Often after an epidemic or a large pandemic, each country will revise their numbers, they will look at their deaths which have been put aside – due to old age, maybe heart disease, or influenza – and then assess the likelihood that it was COVID-19,” McLaws said.

“Many of these deaths will not have a forensic investigation to identify actually how they did die. So the number will never be perfect for how many of them died from COVID-19,” she said.

Italian military has locked down a nine-storey squat, where 18 people share one toilet, after residents tested positive. 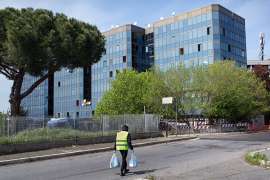 How to correctly interpret the coronavirus numbers and charts

The coronavirus numbers being reported are not facts – but they’re the best we’ve got. Here’s how to make sense of them. 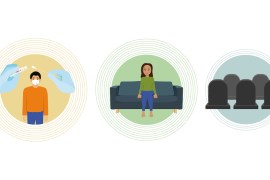