Yangon, Myanmar – “I had a conversation with someone yesterday, who told me that thanks to God, there is not a single Christian who has been infected with the virus,” Pastor David Lah declared, wagging his finger at the audience in a recorded sermon posted on social media.

“I can guarantee that the church that goes by Jesus’s teaching, there will be no infection,” added Lah, as he waved a bible in the air at an event held earlier this month, in defiance of the Myanmar government’s order banning religious gatherings due to the coronavirus outbreak.

Days later, Lah tested positive for COVID-19, the disease caused by the rapidly spreading coronavirus. He and three other people have also been charged with violation of the country’s Natural Disaster Management Law.

According to local news reports, as of Friday, at least 22 coronavirus cases were linked to the religious event that Lah hosted, including the pastor himself and famous Myanmar Christian rock singer Myo Gyi.

As of Saturday, Myanmar has recorded at least 94 cases of infections and five deaths, according to the Johns Hopkins University tally. Many of the new cases have no recent travel history and no contact with recent travellers.

Myanmar has been slow to roll out testing for coronavirus, having only tested approximately 3,200 people so far. At the end of March, it had tested 500 people out of a population of 54 million.

Andrew Tatem, an epidemiologist at the University of Southampton in the UK, said more testing would uncover more confirmed cases, a crucial component in finding and isolating patients, as well as guiding government response.

Myanmar banned international flights at the end of March and has been trying to quarantine the thousands of migrant workers returning from Thailand by land. But some fear it may be too late.

“Banning international flights may have little significant impact if the virus is already widespread,” Tatem said, while noting that Myanmar’s rate of testing is still too low to determine whether the virus is circulating in the country.

Tatem said while lockdowns “appear” to be working in other countries, they must be paired with policies that should be put in place after the lockdowns are lifted. 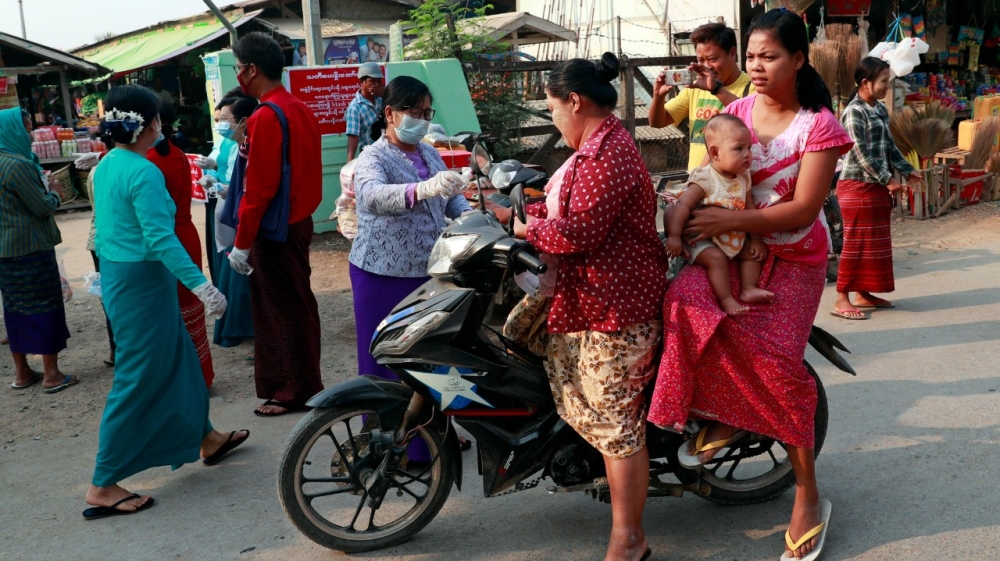 Yangon is currently under lockdown from April 10 to April 19, coinciding with the Thingyan New Year holiday [Aung Shine Oo/AP]

Yangon is currently under lockdown from April 10 to April 19, coinciding with the Thingyan New Year holiday. A curfew has also been imposed from 10pm to 4am. On Saturday, the government also announced an extension of the lockdown in seven townships of Yangon after April 19, although it did not say until when.

Going forward, the government has banned gatherings of five or more people but, as of April 17, has not decided whether to extend the full lockdown.

Naing Ngan Lin, the Yangon Region minister for social affairs, told Al Jazeera that 10 building complex around the city where cases had been identified would be locked down for 21 days beginning April 14.

Other parts of the country have developed their own responses, with Mandalay and Sagaing Regions imposing night-time curfews.

The country’s popular leader, State Counsellor Aung San Suu Kyi, has attempted to use the strength of her personality to spearhead the government’s response. She launched her first personal Facebook page on March 31, to directly communicate with the people.

In a post on Thursday, she warned that those who violate government orders will face legal action.

She alluded to her years spent under house arrest as an opponent of the former military government. “These things pass. When you look back what remains is the strength of ‘I have endured this,'” she said.

Phil Robertson, deputy director of Human Rights Watch’s (HRW) Asia division, said it is acceptable for Myanmar to “temporarily restrict public assemblies” due to the crisis, but it should not be jailing violators.

HRW had previously called for Myanmar to release nonviolent criminals and political prisoners, fearing the virus could spread rapidly in the country’s overcrowded jails.

The government appeared to heed that call on Friday, releasing nearly 25,000 prisoners during the annual presidential pardons.

While the mass release happens every year, over twice as many prisoners were released in 2020 compared with the previous two years. Ironically, large crowds gathered outside the prison to receive the thousands of released inmates, ignoring advice on physical distancing.

As for Pastor Lah, he and three others were charged on Tuesday for organising the religious gathering, facing up to three years in prison each, a fine, or both.

A police officer from Insein Township, who wished to remain anonymous, said all four men who were charged tested positive for COVID-19 and were receiving treatment, and legal action would be pursued upon their recovery.

Since the controversy erupted, a photograph also began circulating on social media showing Lah meeting with Vice President Henry Van Thio, also a devout Christian, prompting the government to announce that Van Thio would be tested, despite the meeting taking place on February 9.

This was not the first time Lah courted controversy.

In a 2013 video, he had been fiercely critical of Muslims, saying they are trying to take over the world.

In an undated video that went viral after he was charged, Lah was also quoted as saying that Buddhist monks’ teachings make people “sinful”, provoking angry, anti-Christian backlash online. One user asked if Jesus would save Lah from prison, and another said all who insult Buddhism should get the coronavirus.

Robertson of HRW said a better approach in addressing “recalcitrant offenders” like Lah, is to temporarily shut the facilities they are using and hit them with “heavy enough fines to make them notice.”

He added that Myanmar should make it clear that it will “not tolerate” hate speech.

“Inter-religious harmony and solidarity should be built to mobilise people of all faith against this pandemic,” he said.

Harmony, however, has been hard to come by. Even as the Myanmar government insists it is helping all its citizens, conflict rages in ethnic areas.

The Karen Peace Support Network, has accused the Myanmar military, known as the Tatmadaw, of carrying out campaigns of violence and destruction against the ethnic Karen people, who are fighting for more autonomy. The group said the military operations have prevented them from preparing for the health emergency brought by the coronavirus pandemic.

“While the government is promising food to people impacted by COVID-19 in central Burma and urban centers, the Burmese military have burned down Karen villagers’ fields and rice barns, drastically reducing their chances of survival during the ongoing pandemic,” the group said.