United States President Donald Trump has repeated bold claims throughout the coronavirus crisis, from quick travel bans to claims that he has “total” authority.

While many of these claims have been met with praise from his supporters, they have been scrutinised by others.

While there is truth to some of his claims, many appear to have factual inaccuracies. Here’s a look at five of Trump’s most common coronavirus claims:

Trump has repeatedly boasted about his January 31 order to block travel from China, saying at a news briefing in March: “We’re the ones that gave the great response, and we’re the ones that kept China out of here. … If I didn’t do that early call on China – and nobody wanted that to happen. Everybody thought it was just unnecessary to do it”.

While the order did block entry to the US from those who have been in China in the last 14 days, US citizens and certain qualified foreign nationals were exempted.

Nearly half a million people had travelled to the US from China since the coronavirus was announced to international health officials in January, The New York Times reported on April 4.

There were 1,300 direct flights between China and 17 US cities before Trump’s order, and many who travelled received “spotty screening” upon arrival, according to the newspaper.

At least 40,000 people – mostly US nationals – had made the trip since the January 31 order, The New York Times said.

Trump has also claimed the US led the world in banning travel. However, other countries halted travel from China at roughly the same time.

North Korea appeared to close its borders to China on January 30, according to Reuters news agency.

While the administration insists the travel ban saved lives, studies have called into question the widespread efficacy of travel bans and affirmed testing and isolation as more effective measures.

During daily news briefings, Trump has repeatedly praised US testing efforts, claiming the country is leading the world and that “anyone who wants a test can get a test”.

But testing for COVID-19, the disease caused by the coronavirus, was initially slow and the tests were fraught with defects.

While German officials developed their own test, which was quickly adopted by World Health Organization officials in January, the US Centers for Disease Control and Prevention (CDC) decided to develop its own, as it has done in previous outbreaks.

Initial guidelines limited tests to those who were exhibiting symptoms, partly due to limited testing capacity at the CDC laboratory.

Additionally, many of the tests were shipped with faulty reagents, a component used to cause a necessary chemical reaction within the test.

CDC Director Dr Robert Redfield said at a March 6 press briefing that authorities “found that, in some of the states, it didn’t work … We figured out why. I don’t consider that a fault. I consider that doing quality control. I consider that success.”

Governors in several states this week said they are still not able to give a test to anyone who wants one, with many calling on the federal government to do more to aid their efforts.

The Trump administration has long lauded the strength of the US economy under its guidance. The coronavirus crisis has upended that claim, with over 16 million US workers filing for unemployment in less than a month and retail purchases plummeting.

The administration is pushing for a reopening of states according to a national plan, but some governors are signalling their resistance.

This is not accurate, according to the US Constitution, the document on which US laws and governance are based.

While the Executive Branch of the US government – the head of which is the president – has wide-ranging powers, they are not “total”.

The 10th Amendment of the constitution gives powers not afforded to the federal government to the states or the people.

“There is no light switch here, it’s more like a dimmer,” California Governor Gavin Newsom, who has unveiled his own plan to reopen the state, said.

Newsom’s office has stated that California will reopen according to recommendations from science and health officials.

Trump has repeatedly stated that an anti-malarial drug, hydroxychloroquine, is a possible treatment for COVID-19 that could be a “game-changer”,  seemingly based on anecdotal evidence.

“What do you have to lose? Take it,” Trump said at a press briefing on April 4.

There are currently no studies that prove the drug, which has been used to treat malaria for years, is effective in its treatment of COVID-19 symptoms.

A recent French study looked at 181 people admitted to the hospital for COVID-19. About half the people were given hydroxychloroquine, but there was no statistical difference in the death rate in either group, the study said.

Trump’s own team has warned against placing too much faith in the drug. Dr Anthony Fauci, a leading government expert on infectious diseases, said “No. The answer is no,” when asked if there was evidence to suggest hydroxychloroquine treated or prevented COVID-19.

Fauci stressed that results from other tests are pending.

Trump has repeated that people should consult with their doctors before taking the drug.

Results from further studies are pending.

Trump has contrasted his administration’s response to the coronavirus with that of former President Barack Obama’s efforts to contain the H1N1 virus, also called swine flu.

“Sleepy Joe Biden was in charge of the H1N1 Swine Flu epidemic which killed thousands of people”, Trump tweeted on March 12, criticising the presumptive Democratic nominee for president who will run against Trump in November.

Sleepy Joe Biden was in charge of the H1N1 Swine Flu epidemic which killed thousands of people. The response was one of the worst on record. Our response is one of the best, with fast action of border closings & a 78% Approval Rating, the highest on record. His was lowest!

Trump said the response was “one of the worst on record” and touted his “78 percent” approval rating for his administration’s response.

The first swine flu case was detected in the US in April 2009, three months after Obama took office.

The Obama administration’s acting director of health and human services declared the virus a public health emergency on April 26, 2009, before it was declared a global pandemic.

Also, polling at the time showed roughly 67 percent of the US was confident in the government’s response to swine flu.

Trump’s figure of 78 percent is thought to have referenced polling from February, before the US experienced any COVID-19 fatalities. 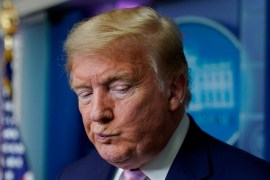 Critics call US president’s move ‘a dangerous step in the wrong direction’ after he cuts 15 percent of UN agency budget. 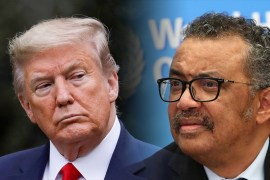