After two previous candidates failed to form a government, hopes are high among Iraq’s political elite that head of intelligence Mustafa al-Kadhimi will be able to complete the task.

Al-Kadhimi’s nomination was announced by President Barham Salih on Thursday at a ceremony at al-Salam presidential palace in Baghdad as representatives from the majority of Iraq’s political blocs watched on.

Moments earlier, al-Kadhimi’s predecessor, a former Najaf governor and leader of the Nasr parliamentary bloc, Adnan al-Zurfi, announced the withdrawal of his candidacy.

This came weeks after former communications minister Mohammed Allawi also stepped aside in the face of strong rejection from influential political groups and an anti-government protest movement, which had forced then-Prime Minister Adel Abdul Mahdi to step down in December after only a year in office.

The successive failures have left Iraq without a fully-functioning government for more than three months, during which time the country has faced a coronavirus outbreak as well as the fallout from the United States’s assassination of Iranian General Qassem Soleimani in Baghdad on January 3.

Although the coronavirus outbreak has quelled the protest movement, which had been marked by massive rallies in the capital Baghdad and across much of the largely Shia south, its members have rejected al-Kadhimi’s nomination.

However, some analysts say the new candidate has enough support across Iraq’s political spectrum, and from Iran and the US – Iraq’s most influential foreign allies – to form a government before the 30-day deadline expires.

While Allawi failed to have his cabinet approved by Sunni, Kurdish and some Shia parties, al-Zurfi, who was tasked with forming a government on March 17, did not reach the stage of forming a cabinet.

“Zurfi withdrew without even presenting his cabinet to Parliament, as he was faced with unified opposition from all leaders of the Shia, Sunni and … Kurdish factions,” independent Iraq researcher Zeidon Alkinani, told Al Jazeera.

On the eve of al-Zurfi’s withdrawal, the Alliance of Iraqi Forces, the largest Sunni bloc in Parliament, released a statement announcing its rejection of al-Zurfi and its support for al-Kadhimi instead. The move was reciprocated by the president of the Kurdish region of northern Iraq, Nechirvan Barzani, reflecting a similar sentiment among the Kurds.

Meanwhile, Shia blocs close to Iran had strongly rejected al-Zurfi from the moment he was announced as prime minister-designate. They perceived al-Zurfi, who was endorsed by the US secretary of state for near east affairs, David Schenker, as too close to the US.

“Zurfi had opposition that saw him as too closely aligned with the US and faced a veto of sorts from Iran who did not want to see a PM approved without their blessing,” said Sajad Jiyad, an independent Iraqi analyst.

Renad Mansour, head of the Iraq initiative at Chatham House agreed: “Iran made it its goal, and as a marker of its success in Iraq post Qassem Soleimani, to bring down Zurfi.”

‘Playing by the rules’

But unlike his predecessors, al-Kadhimi, who appears to be “playing by the rules”, according to Mansour, enjoys support from across Iraq’s political spectrum.

“Thursday’s ceremony was aimed at showing political unity around Kadhimi and that this nominee would pass,” said Jiyad, referring to the representation of most parties at al-Kadhimi’s nomination.

“This differs from the previous two nominees who did not have as much consensus around them at the start. This is probably the factor that will most help Kadhimi become PM if it is maintained,” he added.

A key factor behind the support for al-Kadhimi appears to be his inclination towards maintaining the political system in Iraq, introduced after the US invasion in 2003. Under the system, power is apportioned along ethnic and sectarian lines.

Iraqis who took part in the months-long protest movement also see al-Kadhimi as the embodiment of this system, which they campaigned to overhaul, citing corruption, favouritism and its failure to provide job opportunities and basic services to citizens.

“We’ve rejected Kadhimi all along. He represents the system we want gone,” said Ali Khraybit, a 27-year old filmmaker who has taken part in Baghdad’s protests since October.

Another important factor that could boost the new PM-designate’s chances of success is his seeming ability to balance Iraq’s relations with the US and Iran.

Al-Kadhimi, who was born as Mustafa al-Ghareebawi, fled Iraq in 1985 while still a law student, eventually settling in the United Kingdom and gaining British citizenship.

After working as a journalist in the 1990s and 2000s, he completed a law degree in 2012 and was then appointed as head of Iraq’s national intelligence service in 2016.

Al-Kadhimi appears to have nurtured his relations with the US throughout his career, making a potential US endorsement of his candidacy possible, according to analysts.

“Kadhimi spent a lot of time in the US. He is a secular Iraqi nationalist who supported the US invasion and has had long relations with the media and Washington,” said Mansour.

According to Jiyad, al-Kadhimi “maintains close contact with DC and is politically close to Abadi,” he told Al Jazeera, referring to former Prime Minister Hadi al-Abadi, known for his balancing act between the US and Iran.

Analysts believe that al-Kadhimi’s appointment also reflects Iran’s backing for him and signals Tehran’s continuing influence over Iraq in the wake of the killing of Abu Mahdi al-Muhandis, the former deputy leader of the Hashd al-Shaabi (Popular Mobilisation Forces or PMF), who was killed alongside Soleimani.

“Most of the blocs and parties across the political spectrum, including Fateh [which has strong links with Iran-backed PMF groups], have come out in support of Kadhimi’s nomination,” said Jiyad. “For now, it looks like he has broad political consensus behind him.”

“This scenario (Zurfi’s withdrawal and Khadimi’s nomination) shows that Iran is still able to bounce back when looking like on the verge of defeat,” added Mansour.

Recent reports pointed towards Iran’s shrinking influence over an increasingly fractured Hashd, which includes several armed groups that are seen by critics as Iranian proxies in Iraq.

“Iran wanted Zurfi to go,” said Mansour, referring to his “strongly antagonistic” stance towards Iran and Iran-backed groups. In a Twitter post last month, al-Zurfi had said the PMF’s “loyalty will be to Iraq, and Iraqis”.

In order to form a new government, which al-Kadhimi said he hopes to achieve by April 25 – two weeks ahead of the deadline – he still needs to complete the difficult task of securing and maintaining support among Iraq’s various political groups and appeasing the protesters who want an overhaul of the political system.

“Cabinet formation will be the real test,” said Jiyad. “Can he give enough to the parties to get their votes and still present a capable government able to deal with the challenges and maintain some credibility with protesters and the domestic audience,” he asked.

While Mansour believes that al-Kadhimi will succeed, he says the challenges remain significant.

“There is deep fragmentation among the large political groups,” he said. “Kadhimi will have to please everyone while at the same time look like he’s in line with protesters demands of fighting corruption and the old system.”

Some cracks have already appeared, reflecting that al-Kadhimi’s journey so far has not been smooth.

A day after his appointment, Iran-backed Kataeb Hezbollah (KH) – an armed group which the US has blamed for rocket attacks on airbases used by its troops in Iraq – rejected al-Kadhimi’s appointment, which it likened to an “act of treason”.

Observers noted that al-Kadhimi has faced significant opposition since his name was first linked to the job after Abdul Mahdi stepped down, with anti-government protesters as well as Shia political blocs and armed groups also opposed to his nomination.

“The opposition [to al-Kadhimi] came from Fateh and several groups such as Asaib Ahl al-Haq, KH and al-Nujaba Brigades, which openly accused Kadhimi of being a US agent and complicit in the assassination of Soleimani and Muhandis,” said Jiyad.

But according to Mansour, some of these groups have since changed their position, allowing for al-Kadhimi’s appointment.

“Political opponents realised that Iraq might become insolvent … and is on the brink of a massive crisis so they had to come together,” he explained.

While the majority of Shia groups have either endorsed or remained silent on al-Kadhimi, analysts say the former spy chief still needed to work to expand his support base.

“The biggest obstacle for Kadhimi in forming a new government will come from some of the Hashd groups because of his role as the head of intelligence,” said Mansour. “They know he is against the proliferation of militias in Iraq and believes in integrating all of the groups into the system.”

According to Jiyad, these challenges could continue after a government is formed.

“It is likely that the opposition to Kadhimi will appear after he is confirmed, where his government will be challenged in parliament and some sorely needed reforms might not get through,” he said. 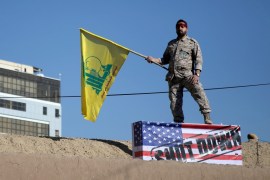 US offers $10m for information on Hezbollah commander in Iraq

Sheikh Mohammed Kawtharani was branded a global terrorist by the US in 2013 and accused of funding armed groups in Iraq. 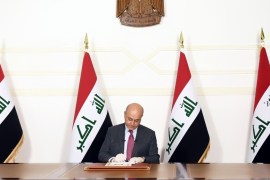