Ismail Mohamed Abdulwahab, a 13–year–old boy from London who tested positive for COVID-19, has died.

He is believed to be the United Kingdom’s youngest coronavirus victim.

“Ismail was only 13 years old without any pre-existing health conditions and sadly he died without any family members close by due to the highly infectious nature of Covid 19,” the family said in a statement on Tuesday.

“Ismail started showing symptoms and had difficulties breathing and was admitted to King’s College Hospital [in London].

“He was put on a ventilator and then put into an induced coma but sadly died yesterday morning. To our knowledge he had no underlying health conditions. We are beyond devastated.”

Any extra funds would be given to the family, said a family friend, who set up the page.

“Sadly, a 13–year-old boy who tested positive for COVID-19 has passed away, and our thoughts and condolences are with the family at this time,” King’s College Hospital said in a statement.

“The death has been referred to the coroner and no further comment will be made.”

While the new coronavirus mostly affects older people and people with underlying health conditions, a minority of victims have been younger, including children.

Di Nicola’s father told the newspaper that the teenager had no underlying health conditions.

In the UK, at least 2,352 people have died after testing positive, according to government figures.

The country suffered its worst daily toll on Wednesday, with the number of deaths rising by almost 563 people in a 24-hour period. 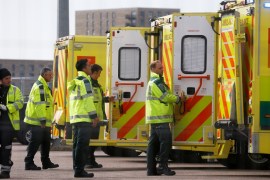 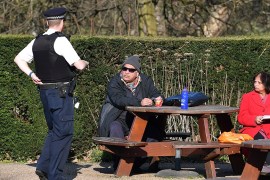 Some police may have gone ‘further than they should have’, says government minister, amid concerns over civil liberties.