A plan by the Trump administration to change the rules under the Migratory Bird Treaty Act could devastate the population of threatened and endangered species and accelerate their decline across North America, a former US wildlife official has warned.

Dan Ashe, a former US Fish and Wildlife Service Director, told the The Associated Press news agency news agency that for years the law’s threat of prosecution served as “a brake on industry” and had probably saved billions of birds.

“Removing that obligation, if it stands, over the next several decades will result in billions of birds being casualties,” said Ashe, who served in the Obama administration. “It will be catastrophic.”

Industry sources and pollutants kill an estimated 450 million to 1.1 billion birds annually, out of an overall 7.2 billion birds in North America, according to recent studies by the US Fish and Wildlife Service.

Under the 50-year practice in the migratory bird law, criminal penalties are being used to put pressure on companies into taking measures to prevent unintentional bird deaths.

The 1918 migratory bird law was passed after many US bird populations were destroyed by hunting and poaching, much of it for feathers for women’s hats.

Over the past half-century, the law was also applied against companies that failed to prevent foreseeable bird deaths.

However, the Trump administration says deaths of birds that fly into oil pits, mining sites, telecommunications towers, wind turbines and other hazards should be treated as accidents not subject to prosecution. And an Interior Department proposal would cement that into federal regulation.

State officials and wildlife advocates who are suing the administration in federal court say birds are already being harmed under actions allowed by a 2017 Trump administration legal memo that signalled the rule change.

Most notable was the destruction last northern autumn of nesting grounds for 25,000 shorebirds in Virginia to make way for a road and tunnel project. State officials had ended conservation measures for the birds after federal officials advised such measures were voluntary under the new interpretation of the law.

The Edison Electric Institute, which represents many US utilities, contends it would be “absurd” to criminalise “ordinary, everyday activities” that happen to result in a bird death, which can result in up to six months in prison and a $15,000 penalty for every bird injured or killed.

The American Petroleum Institute suggested in a regulatory filing: “The birds themselves are the actors, colliding or otherwise interacting with industrial structures.”

More than 1,000 types of birds are covered by the law, from water birds such as ducks and pelicans to woodpeckers, songbirds, hawks and owls.

Criminal enforcement of the law typically was used only as a last resort, according to current and former US Fish and Wildlife Service officials.

The agency conducted 152 investigations into bird deaths across the US over a five-year period ending December 31, 2017, according to spokesman Gavin Shire.

Most involved birds killed by power lines, which kill upward of 25 million birds annually, according to a 2014 government-sponsored study.

The number of investigations resulting in prosecutions was not available, Shire said.

“The goal was to generate voluntary compliance. You do that by educating people,” said Gary Mowad, who served as deputy chief of enforcement during a 25-year-career with the agency.

“We did a great job of keeping (bird) mortality in control. The only regulatory tool that the federal government had at its disposal to address that is now gone or will be gone.”

The most notable enforcement case bought under the migratory bird act resulted in a $100m settlement by BP, after the Gulf of Mexico oil spill in 2010 killed approximately 100,000 birds.

Federal courts have been split on whether companies can be prosecuted, with appeals courts ruling in favour of industry three times and siding against companies twice.

At the Berkeley Pit, initial efforts to discourage birds from landing were prompted by deaths of 342 snow geese that landed in November, 1995.

Then in November 2016 a huge, exhausted flock of snow geese that stayed at their summer grounds in Canada longer than unusual were forced quickly south by cold weather. They found the Berkeley Pit the only open water to escape a sudden snowstorm – and an estimated 3,000 to 4,000 of the birds that landed there died.

In response, Montana Resources dramatically ramped up its bird scare tactics and promised that it would keep up the efforts regardless of the Trump administration’s actions, mirroring pledges from some other companies and industries.

Much of the attention over accidental bird deaths has focused on oil companies.

Kathleen Sgamma, president of the industry group Western Energy Alliance, said estimates of as many as a million birds killed annually in oil pits are outdated because companies have shifted away from using open pits to store hazardous waste from drilling.

“The studies haven’t caught up with the realities on the ground,” Sgamma said.

The US Fish and Wildlife Service disputed Ashe’s claim that billions more birds were at risk from the rule change and noted that most preventive measures already are voluntary ones.

“Without a scientific basis, any claim as to the number of birds that would be negatively affected would be speculative and irresponsible,” Shire, the agency spokesman, said in an emailed statement.

Ashe’s estimate that billions of birds were at risk was supported by a leading ornithologist from Cornell University and two former senior officials with the Fish and Wildlife Service – Brad Bortner, who retired in 2017 from his post as chief of the migratory bird programme, and Paul Schmid, the agency’s former assistant director.

“If we’re talking about over decades, and a billion birds already are killed by industry annually, that does start really adding up pretty quickly,” said Amanda Rodewald, co-director of Cornell’s Center for Avian Population Studies.

“We’re talking about a scale of mortality that’s substantial, that would be meaningful ecologically and biologically.” 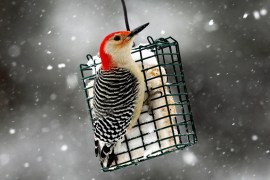 Disappearance of meadows and prairies, expansion of farmlands, use of pesticide blamed for 29 percent drop since 1970. 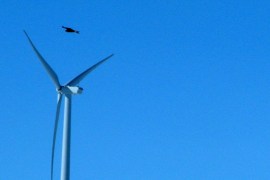 US seeks updated wind turbines amid deaths of birds 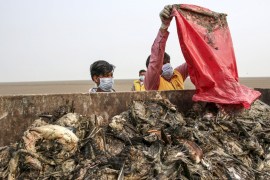 Botulism being feared behind the death of thousands of mostly migratory birds along Sambhar Lake in Rajasthan state.