On Monday, after a day of heavy shelling and fighting led by the Fourth Division of Maher al-Assad, brother of Syrian President Bashar al-Assad, an agreement was brokered by Russia that saw two dozen opposition fighters leave the town for opposition-held areas in the country’s northwest, local residents told Al Jazeera.

At least seven civilians were killed in the clashes.

On Tuesday, Syria’s state news agency SANA said an operation conducted by security forces and police units “ended the state of chaos” in Al-Sanamayn, but did not report any casualties.

Deraa province, where the Syrian uprising started nine years ago, was an opposition stronghold until 2018, when government forces backed by Russian and Iranian forces launched an operation to retake it. After months of heavy fighting that killed hundreds of people and displaced hundreds of thousands, opposition factions and the government reached a reconciliation agreement brokered by Moscow.

Under the deal, opposition fighters were allowed to remain in partial control of several areas, including Al-Sanamayn, as well as retain some light weapons. Despite the agreement, however, tensions in the province have simmered ever since, as government forces, militias and local armed volunteers have continued arrests, intimidation and killings of local residents and members of the opposition.

According to Adham al-Kirad, a former commander in the Free Syrian Army, the raid on Al-Sanamayn was preceded by intermittent clashes between opposition fighters and members of pro-Assad armed volunteer groups, known as popular committees.

“The regime forces joined the fighting on the side of the popular committees. Then the Russian side intervened,” said al-Kirad, who was also part of the 2018 reconciliation deal.

On Sunday, al-Kirad was among hundreds of protesters who took to the streets of Deraa city to call on the government to stop its attack on Al-Sanamayn.

The escalation in the south comes as government forces and their allies have been fighting opposition factions in the country’s northwest, prompting neighbouring Turkey to intervene militarily.

The government currently controls most of Syria’s territory, except for the opposition stronghold in Idlib province in the northwest; three small pockets in the north held by Turkish forces and their Syrian allies in the north; and the area east of the Euphrates River up to the border with Iraq controlled by the US-backed and Kurdish-dominated Syrian Democratic Forces.

According to Ahmed Aba Zeid, an Istanbul-based researcher, Deraa is a special case compared with other territories seized by the Syrian government over the past two years because of the reconciliation deal.

“Deraa, the cradle of the Syrian revolution, did not have mass evacuation after the regime takeover, which meant that supporters of the revolution remained and so did opposition fighters, many of whom refused to join government forces and fight in the north,” he said.

In areas where there was the evacuation of both fighters and civilians, such as the Ghouta suburbs of Damascus and Al-Rastan area in Homs province, the government has managed to retain tighter control.

Aba Zeid said the attack on Al-Sanamayn, seen by locals as a violation of the 2018 deal, is likely to further escalate tensions in Deraa.

It came amid an intensifying campaign of attacks against government troops, allied militias and even opposition fighters who had joined the ranks of the Syrian army. Since the agreement, local rights groups have reported an increasing number of targeted assassinations and roadside bombings as well as attacks on checkpoints, offices of the intelligence and different militias, among others.

A January report by the Syrians for Truth and Justice rights organisation said that in the second half of 2019, Deraa experienced its “most violent [period] since the settlement agreement”. The group documented at least 72 assassinations, most of which targeted individuals affiliated with Damascus, Iranian forces and members of the Lebanese armed group, Hezbollah.

Another local organisation, the Deraa Martyrs Documentation Office, which documents human rights violations in the province, reported 39 attacks and assassination attempts, which led to the death of 26 individuals in the month of February alone. Thirteen of the victims were former members of the opposition who had joined government units.

In November 2018, opposition Syrian media published reports of the formation of a “popular resistance” in Deraa which reportedly took responsibility for a number of attacks on government forces in the province in subsequent months. However, in most of the cases, there has been no claim of responsibility.

According to a former Free Syrian Army fighter, who spoke on the condition of anonymity for fear of retribution, most of the attacks are individual acts and are not carried out in an organised fashion.

“The regime just won’t leave people alone. And people are armed. So when something happens to someone, his neighbour responds. For every infraction there is a reaction,” he said.

The former fighter said many of the attacks on government forces and their allies have been motivated by the growing number of arrests, forced disappearances and killings faced by civilians in Deraa since 2018.

A 2019 report by Human Rights Watch said “Syrian intelligence branches are arbitrarily detaining, disappearing, and harassing people in areas retaken from anti-government groups” and that such measures have been taken even against people who have signed reconciliation agreements.

The Russian defence ministry, which helped broker the reconciliation deal in 2018, did not respond to a request for comment on these violations.

According to the Deraa Martyrs Documentation Office, 391 people were arrested or forcefully disappeared in the province in 2019, five of whom died under torture. The number does not include those arrested as part of forced conscription by the government, who, the organisation estimates, are in the thousands.

The arrests and killings have sparked sporadic protests across the province. In November, large demonstrations held in Deraa city and elsewhere pressured the government to release 33 detainees.

Apart from growing anger, there is also increasing fear among local residents, according to Abu Mahmoud al-Horani, spokesman of the Deraa-based citizen journalist group Tajamo Ahrar Horan. His organisation has estimated that some 2,500 have fled the province since the reconciliation with Damascus because of continuing oppression and the fear of arrest and torture.

“Members of our group have also received death threats and have had to flee Deraa by being smuggled outside the country,” he said.

Outside of Deraa, the protests and attacks have been perceived by some as an indication that there is “renewed momentum” in the anti-government uprising – but the former opposition fighter disagrees.

“We wish to say the revolution continues, but we are weak in organising,” he told Al Jazeera.

“As long as the violations of the regime and its militias continue, the situation will go towards escalation and increasing tension. There is a possibility that this could take the shape of another uprising, but I do not see this happening in the near future,” he said.

Al-Horani said the attack on Al-Sanamayn was meant as a demonstration of power by the government at a time when the advance of its forces in Idlib was halted and its grip on Deraa appeared shaky.

According to Heiko Wimmen, a researcher at the New York-based International Crisis Group, the government has struggled to control not just Deraa but other territories as well.

“In many areas that the regime recaptured, it is not so clear who actually holds control,” he said.

Given its limited capacity at the moment, the strategy of the government appears to be to cooperate with local actors to retain control in exchange of giving them “leeway” in local affairs, Wimmen said. Eventually, Damascus will seek to consolidate its power through “hierarchically controlled security services”, which would require rebuilding planning and strategic capacity at the centre, he added.

Establishing full control, however, may be challenging for the government.

“The war in the northwest is not over,” Wimmen said. “A ‘victory’ there may bring them a deadly insurgency, which already exists in the southeast. Then there is the problem of the Kurds and of course the deteriorating economic situation.”

Last year, the Syrian lira collapsed, losing more than 100 percent of its value against the US dollar amid skyrocketing inflation that saw the prices of basic foodstuffs and fuel surge. In January, small protests were held across the country, including in the southern Druze-majority province of Sweida, which remained loyal to Damascus throughout the Syrian uprising.

According to Aba Zeid, the government will be unable to establish full control over territories it has taken over even if it manages to capture Idlib.

“The rejection of the regime and its lack of capacity to establish stability, along with its continuing crimes against civilians, will continue to feed resistance against its rule across Syria,” he said. 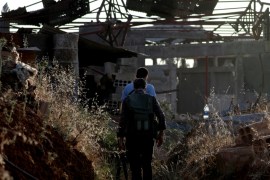 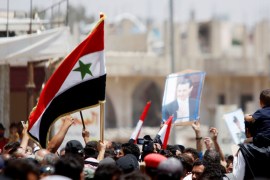 State TV says the army hoisted the flag near the post office, as President Assad takes further control of the country.