Editor’s note: This article was first published on March 24, 2020. To view the latest figures related to the coronavirus, visit this page.

For weeks now, the daily briefings by Italy’s civil protection agency have been providing grim updates on the number of people killed by COVID-19, the highly infectious respiratory disease caused by the new coronavirus, deepening a sense of gloom in a country that has become the deadliest centre of the pandemic.

Despite a series of near-draconian measures gradually rolled out to halt the spread of the virus, including a nationwide lockdown and the shutdown of all non-essential businesses, Italy has been unable to “flatten the curve” – slowing the spread of the contagion in a bid to prevent an already overburdened healthcare system from being overrun.

The country’s latest tally reported a total of 6,078 deaths from 63,928 infections, with a world-leading fatality rate of more than 9 percent.

In contrast, in China, where the outbreak originated, the mortality rate stands at 3.8 percent. In Germany, which has reported more than 24,000 cases and 94 deaths, it is at 0.3 percent.

But there may be several reasons for Italy’s alarming mortality rate.

“The numbers we have are not representative of the entire infected population,” said Massimo Galli, head of the infectious disease unit at Sacco Hospital in Milan, the main city in the worst-hit region of Lombardy where 68 percent of the total national fatalities have been reported.

Galli explained that as the emergency situation rapidly deteriorated over the past month, Italy focused its testing only on people showing severe symptoms in areas with high epidemic intensity – the result, experts say, is that the currently available numbers produce a statistical artefact, a distortion.

“This causes an increase in the fatality rate because it is based on the most severe cases and not on the totality of those infected,” Galli said.

The coronavirus may take up to 14 days before an infection flares into symptoms, such as fever and dry cough, and during that incubation period, asymptomatic patients may potentially transmit it. Experts believe it is this so-called “stealth transmission” that has driven the rapid spread of the outbreak, infecting communities that remain unaware until they develop symptoms and get tested.

As of March 15, Italy had carried out about 125,000 tests. In contrast, South Korea – which implemented a strategy of widespread testing – has conducted some 340,000 tests, including for those showing mild or no symptoms at all. It has recorded almost 9,000 infections to date, with a mortality rate of 0.6 percent.

While the new coronavirus can infect people of all ages, older adults, whose immune systems have declined with age, appear to be more vulnerable to becoming severely ill after contracting the virus.

In Italy, 85.6 percent of those who have died were over 70, according to the National Institute of Health’s (ISS) latest report.

With 23 percent of Italians over 65 years old, the Mediterannean country has the second-oldest population in the world after Japan – and observers believe age distribution could also have played a role in raising the fatality rate.

Another possible factor is Italy’s healthcare system itself, which provides universal coverage and is largely free of charge.

“We have many elderly people with numerous illnesses who were able to live longer thanks to extensive care, but these people were more fragile than others,” Galli said, adding that many patients at Sacco Hospital – one of Italy’s largest medical centres – who died due to coronavirus were already suffering from other serious diseases.

According to the ISS’s latest report tracing the profile of COVID-19 victims, 48 percent of the deceased had an average of three pre-existing illnesses.

Experts also pointed to Italy’s “social contact matrix” as another possible reason, although indirect, behind the wider spread of the coronavirus among older people.

“Elderly Italian people, while most of them live by themselves, are not isolated, and their life is characterised by a much more intense interaction with their children and younger population compared to other countries,” said Linda Laura Sabbadini, central director of the Italian National Institute of Statistics.

“When such an external shock [such as the coronavirus outbreak] takes place, it’s important that these interactions decrease, hence isolating elderly people should have immediately been a priority.”

However, such explanations arising from the peculiarities of the Italian experience – ranging from strong familial ties in a geriatric society to issues surrounding testing practices – should not make other nations complacent, experts warned.

“Other countries should watch closely,” said Pierluigi Lopalco, epidemiologist and professor of hygiene at the University of Pisa.

“What we are watching in Italy is the same movie we have already seen in China, where Italy is Hubei and Lombardy is Wuhan,” he said, referring respectively to the Chinese province that was sealed off by the authorities, and its capital where the new coronavirus was first detected late last year.

“I am afraid we will be re-watching the same film again in other countries in the coming weeks,” warned Lopalco, who is part of a taskforce leading the epidemiological response in Puglia, in southern Italy.

Citing the epidemic curve of other countries, Lopalco suggested that the difference between them and Italy is timing: they are simply at an earlier stage.

“After China, Italy is the first country where the epidemic erupted; hence, we are dealing with the effects of an advanced-stage epidemic.”

While many countries are gradually adopting stricter measures to implement social distancing, they have so far resisted taking the same drastic steps as Italy due to significant worries about the economic effects of such moves.

Italian doctors at the centre of the country’s battle with the pandemic have warned that the reluctance to act quickly and decisively could have important consequences.

“If I were the head of any country’s health ministry I would be terrified, and I would move extremely fast to adopt strict measures to contain it,” Galli said, stressing that “in these situations, we all are forever unprepared: it is impossible to be fully ready to handle such events”.

As Italy has been holding its breath in hopes of the pandemic flattening its curve, the strained healthcare system has been quickly approaching total saturation.

In Lombardy, some doctors on the coronavirus front lines are working without adequate protective equipment, according to reports, exposing themselves to great risk. Already, 14 of them have died, and a total of 3,700 nurses and doctors have been infected while on duty, according to ISS.

Meanwhile, authorities in Italy’s hardest-hit region are racing against time to isolate people and find beds for patients. In central Milan, the four-star Michelangelo Hotel is being transformed into a quarantine facility for some 300 people, while an exhibition pavilion is being turned into an intensive care unit for a similar number of patients. Both are scheduled to be in operation by the end of this week.

According to Galli, it will be weeks before a consistent slowdown is recorded in northern Italy because the region is still coping with the infections contracted before the implementation of the sweeping isolation measures.

“We are like a man submerged into the sea with the tip of his nose still being able to reach the surface. He is still breathing, but also hoping that a new wave doesn’t come.”

However, the latest update by the country’s civil protection agency was grounds for some cautious optimism.

The number of new infections on Sunday stood at 3,957, compared with 4,821 the day before, while deaths fell to 651 from a record 793 on Saturday – a rare moment of respite. And on Monday, the slight improvement continued, with new fatalities dropping to 602 even as infections rose to 4,160. 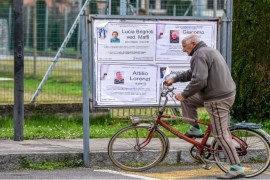 For some elderly Italians, loneliness brings more fear than virus

More than 56 percent of coronavirus deaths have been people over 80, but for some, the sense of abandonment hurts most. 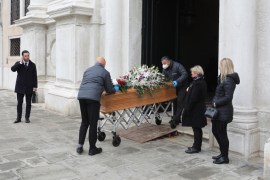 In Italy, deaths and funerals in isolation bring unknown pain

Hospitalised coronavirus patients cannot see their families and, as funerals are banned, final goodbyes must wait. 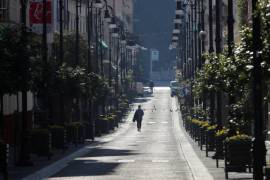