Islamabad, Pakistan– Pakistan has moved closer to a countrywide lockdown to attempt to control the accelerating spread of coronavirus cases across the country, as cases hit more than 850 and doctors complain of dwindling personal protective kits.

On Monday, a full lockdown went into effect in the southern city of Karachi, home to more than 20 million people, while Punjab province – home to almost half of Pakistan’s 207 million people – also announced widespread restrictions on public movement.

The government in both areas has restricted people to their homes, other than to access essential services such as groceries, pharmacies or medical care, according to a government announcement.

Countrywide, Pakistan has so far recorded at least 859 cases of coronavirus, with six deaths and six patients making a full recovery, according to government data. The number of cases has more than quadrupled in a week.

In Karachi, citizens were ordered to remain within their homes and to only leave for emergencies or to obtain groceries or medicines.

“[The provincial] government is satisfied that it has become extremely urgent and important to prevent mixing/gathering/meeting of people by taking extreme measures to contain the spread of COVID-19 and therefore imposes ban on the movement and the gathering of people,” read a government announcement.

The lockdown will remain in place until at least March 31, the statement said.

A day earlier, however, Pakistan’s Prime Minister Imran Khan said that he was not prepared to place the entire country on lockdown because of the associated economic costs.

“Twenty-five percent of Pakistanis are below the poverty line … today if I impose a complete lockdown then … my country’s rickshaw drivers, pushcart vendors, taxi drivers, small shopkeepers, daily wage earners, all of them will be shut in their homes,” Khan said in a televised address to the nation.

“If Pakistan had the resources that Italy has, that France has, that the US has, that England has, I would fully lock down all of Pakistan today.”

The prime minister advised citizens to self-quarantine if they felt ill, and to limit their social contacts to stop the spread of the virus.

Pakistan’s government has placed a ban on all public gatherings, closed educational institutions, shopping malls and other public places until at least April 3. On Saturday, the country also suspended all incoming international air traffic until April 4. 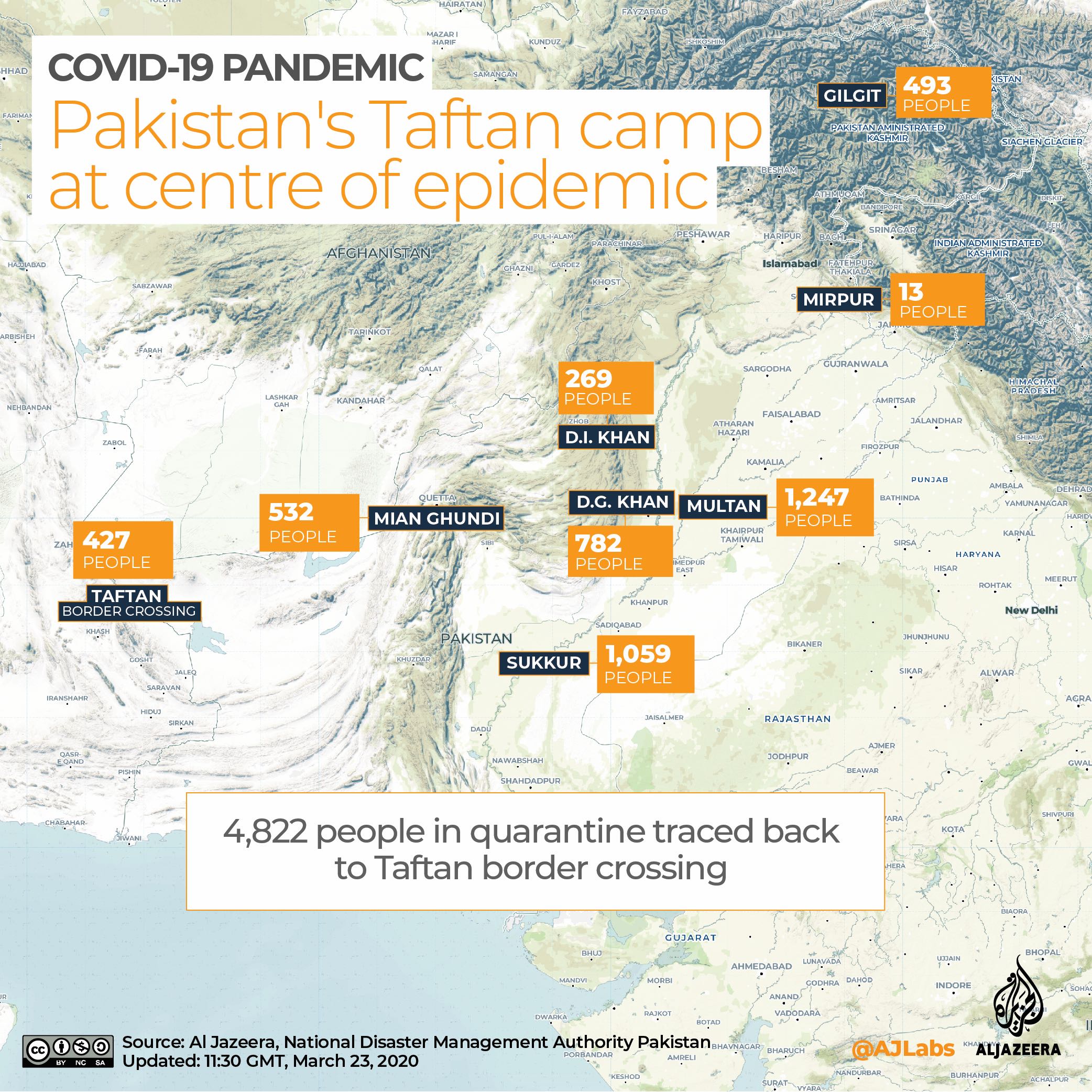 Sindh province, within which Karachi is located, has seen the highest number of cases across the country, recording at least 352 cases since Pakistan’s outbreak began in late February.

At least 260 of those cases were tested at a quarantine camp in the city of Sukkur, established to house travellers who arrived in the country from Iran and had previously passed through the Taftan quarantine camp at the border.

The Taftan camp – criticised by those held there as lacking proper medical and social isolation facilities – has been at the centre of Pakistan’s outbreak of cases.

At least 57 percent of all people who have tested positive for coronavirus in Pakistan passed through the camp at some stage, according to government data.

“In Taftan, everyone was sleeping in a single room, all our children were sleeping with us,” said Hussain Bux Gopang, 48, currently housed at the Sukkur quarantine camp.

“There were very few medical checks in Taftan. They would check our temperature on our forehead [and] they had no other checking there.”

Others echoed those complaints.

“They kept us in a tent [in Taftan],” said Lal Bux Khaskheli, 36, a labourer who arrived at Taftan from Iran on March 2. “It was very, very cold, and we had small blankets. It was very difficult there. We did get food on time, but … there were just a few bathrooms … for about 600 people.”

The camp at Sukkur, which currently houses more than 1,000 people, has been set up in a disused residential complex, and people held there say facilities are much better.

“Per person, we get one room, with a bed, a prayer mat, a towel, soap,” said Gopang. “Conditions are good here. This is 100 percent better than Taftan.”

Khaskheli, however, disagreed, saying while there was better medical care and testing, those in the Sukkur quarantine camp were still not being treated for their pre-existing conditions.

“We have not been asked about our symptoms or what we should be doing in order to save ourselves from infection,” he said. “The least they should do is monitor our conditions.”

In addition to Sukkur, people who passed through Taftan are also being held at separate quarantine camps across the country, in Multan (1,247 people), Dera Ghazi Khan (782), Dera Ismail Khan (269), and just outside Quetta (532), according to the National Disaster Management Authority (NDMA).

More than 400 people remain quarantined at Taftan, according to the provincial government’s data.

Pakistani authorities say they are racing to secure supplies and hospital space in case numbers of COVID19 patients continue to rise. Currently, the government says it has more than 35 hospitals set up to deal with the outbreak, equipped with more than 118,000 beds.

Doctors across the country, however, have complained that they are battling the virus without proper protective equipment.

“We do not have personal protective equipment (PPE), or goggles, and even [face] masks we are buying from our own funds,” said Dr Ahmed Zeb, 35, a spokesman for a doctor’s union in the northwestern Khyber Pakhtunkhwa province. “We have nothing and we don’t know where patients are coming from.”

“Only those on the front line have kits, those in emergency and casualty do not really have access to them,” he told Al Jazeera.

At his hospital, which caters to thousands of patients a day, with a staff of more than 1,000, Akbar said there were less than 40 PPE kits left in storage.

On Friday, Lieutenant General Muhammad Afzal, the NDMA chairman, said the government was working on securing more PPEs and other resources for healthcare workers.

On Sunday, the health ministry announced that 14 metric tonnes of PPE, “including face masks, thermometers, gloves [and] gowns”, had been dispatched to Pakistan.

On Sunday, authorities in Gilgit-Baltistan state said a young doctor had contracted the virus while screening travellers at a road checkpoint, and subsequently died.

“If we do not protect our healthcare providers and keep losing them … what will we do? Won’t it get worse than Italy and China?” asked Zeb.