By
Farah Najjar and
Maram Humaid

Palestinian officials have announced the first two cases of COVID-19, the disease caused by the new coronavirus, in the besieged Gaza Strip.

The pair exhibited symptoms of the illness, which include a dry cough and high fever, Abulreesh told a news conference.

He added that the two were placed in quarantine upon arrival and are now in a field hospital in the border town of Rafah, in the southern Gaza Strip.

Abulreesh urged Gaza’s nearly two million residents to take precautionary measures and to practise social distancing by staying home in a bid to halt the potential spread of the virus.

Authorities in Gaza, which is run by the Hamas group, have decided to shut down the enclave’s restaurants, cafes and reception halls. Friday prayers at mosques have also been suspended until further notice.

Meanwhile, the Coordination of Government Activities in the Territories (COGAT), an Israeli military unit that is responsible for civilian matters in the occupied territories, announced that effective on Sunday, all crossings into Israel from Gaza and the occupied West Bank have been closed.

“Merchants, workers and other permit holders will not be permitted to enter from the crossings until further notice,” COGAT said on its Twitter page, adding that some exceptions may apply to nurses and health workers, as well as exceptional medical cases.

Palestinians say permits to cross are hard to obtain, even for those with a medical or humanitarian reason, as each application is accompanied by a long logistical process, usually under the pretext of security clearance.

‘We are very afraid’

To date, there are 20 designated facilities in Gaza’s south, including schools, hotels and medical facilities, housing more than 1,200 people, according to a report released on Saturday by the Palestinian Authority’s health ministry.

The quarantine centres are located in Rafah, Deir al-Balah and the southern city of Khan Younis. According to the report, at least 2,000 other returnees have been self-isolating in their homes, prior to when the mandatory quarantine procedures were implemented last week.

Um Mohammed Khalil is among those who are being quarantined in Rafah.

After returning from a short visit to Egypt last week, the 49-year-old was among 50 other people who were bussed to a school with “poor hygiene standards”, where single rooms are shared by seven people.

The news of the first two positive cases sparked fear and anxiety among those quarantined in the school, Khalil told Al Jazeera.

“We were afraid that among us would be infected people, especially as we have been calling for an improvement in the quarantine conditions,” she said.

“Our families have been in contact with us since this morning, and they are also seriously concerned. Gaza has endured many wars and crises, but how can it tolerate this pandemic?” she said. “We are very afraid”.

Gaza’s healthcare system is in shambles and its war-battered residents are especially vulnerable as they have lived under an Israeli-Egyptian siege for nearly 13 years.

The air, land and sea blockade has restricted the entry of essential resources such as healthcare equipment, medication and building materials, among others.

Since 2007, Gaza has seen three Israeli assaults that have resulted in the destruction of civilian infrastructure, including medical facilities and a power plant.

Gaza’s homes, offices and hospitals receive an average of four to six hours of electricity per day.

The World Health Organization (WHO) has warned Gaza’s healthcare system would not be able to deal with an outbreak, given that the strip’s hospitals are overstretched and under-sourced.

Ayman al-Halabi, a doctor at the laboratories run by Gaza’s health ministry, is among a team of physicians responsible for testing incoming samples.

“The routine from two weeks ago was to gather samples from returnees at the Rafah border, which undergo a polymerase chain reaction (PCR) test – the test of choice utilised to diagnose COVID-19,” al-Halabi told Al Jazeera.

Hundreds of other samples of people who may have come into contact with the two first patients are now being tested, al-Halabi said.

“If the biggest and most powerful countries are struggling, how is Gaza supposed to cope?”

‘End of the world’

Globally, more than 300,000 people have tested positive for the highly infectious disease, according to data collected by the Johns Hopkins University in the United States. More than 13,000 people have died from the virus, while some 92,000 have recovered.

With the looming threat of an outbreak, many say the virus might be the last straw for Gaza’s weary residents.

Amira al-Dremly knew that it would only be a matter of time until the virus made its way to Gaza.

But hearing the news that two had tested positive on Saturday still felt like “the end of the world”, al-Dremly told Al Jazeera.

“The biggest fear is that the available resources in Gaza are not enough to act as a temporary solution [to the spread of the virus],” the 34-year-old said.

“I’m very afraid for my children. I am taking measures to educate them about sterilisation and have prevented them from leaving the house,” the mother of four said.

“But the psychological effects are difficult, my family and everyone around me are very confused by this news,” she added.

Gaza, one of the most densely populated areas in the world, is home to some of the biggest Palestinian refugee camps, and al-Dremly noted that social distancing is something that is “easier said than done”. 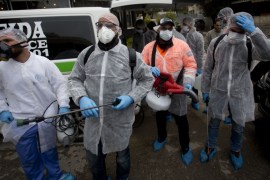 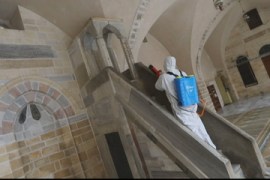 Palestinian territory of Gaza yet to report any coronavirus infections – unlike the occupied West Bank, where number of cases now stands at 39.