Efforts to curb the spread of coronavirus pandemic have slashed economic activity and resulted in localised improvements in air quality, the World Meteorological Organization (WMO) has said.

However, it is too early to assess the implications for concentrations of greenhouse gases that are responsible for long-term climate change. That is because carbon dioxide levels at key observing stations have so far this year been higher than the previous one.

In its statement on Friday, the WMO stressed that any cuts in emissions as a result of the economic crisis triggered by the pandemic are not a substitute for concerted climate action.

“Despite local reductions in pollution and improvement in air quality, it would be irresponsible to downplay the enormous global health challenges and loss of life as a result of the COVID-19 pandemic,” said WMO Secretary-General Petteri Taalas, referring to the disease caused by the coronavirus.

“However, now is the time to consider how to use economic stimulus packages to support a long-term switch to more environmentally and climate-friendly business and personal practices”.

Taalas added that “past experience suggests that emissions declines during economic crises are followed by a rapid upsurge. We need to change that trajectory.

“The world needs to demonstrate the same unity and commitment to climate action and cutting greenhouse gas emissions as to containing the Coronavirus pandemic. Failure in climate change mitigation could lead to greater human life and economic losses during the coming decades,

According to an analysis carried out for Carbon Brief, the lockdown and reduction in economic activity in China led to an estimated 25 percent reduction in carbon dioxide (CO2) emissions in the space of four weeks.

The February monthly average of atmospheric CO2 at Mauna Loa observatory in Hawaii was 414.11 parts per million, compared to 411.75 ppm in February 2019, according to the US National Oceanic and Atmospheric Administration.

Mauna Loa is the world’s longest continual observing station and a benchmark station of the Global Atmosphere Watch Network. At another benchmark station, Cape Grim in Tasmania, average CO2 levels were 408.3 ppm in February, up from 405.66 ppm in February 2019, according to the Commonwealth Scientific and Industrial Research Organisation.

Naturally, the land biosphere takes up a similar amount of CO2 than it releases over the year in a seasonal cycle. Therefore, global average CO2 levels generally increase until April/May.

Observations have shown that nitrogen dioxide (NO2) levels are significantly reduced during the lockdown in both hard-hit China and Italy.

In Italy, a gradual reduction trend of about 10 percent a week over the past four to five weeks has been confirmed by surface observations from the European Union’s Copernicus Atmospheric Monitoring Service. 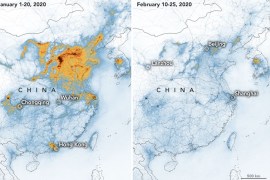 Outbreak forces closure of coal-fired power plants and industrial facilities, leading to a drop in pollution. 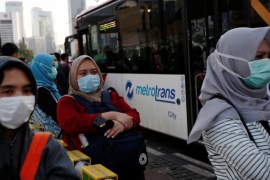 Will warmer weather slow the spread of coronavirus? 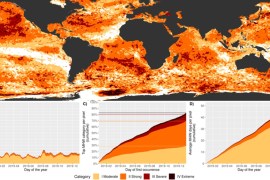 The state of our oceans