Over the past five days, Syrian opposition forces have gained ground in northwest Syria with the help of Turkish air support.

Since December, Syrian government forces backed by Russia and Iran have advanced on the northwest province of Idlib, the last stronghold of the Turkish-backed opposition. But after last week, Turkey deployed dozens of unmanned aerial vehicles (UAVs or drones), as well as heavy artillery in the area, and opposition factions managed to take back some territory.

Opposition commanders told Al Jazeera their forces took control over a number of villages in the area of Jabal al-Zawiya in southern Idlib province, stopping the advance of government forces towards the M4 highway, linking Latakia to Aleppo.

According to Yousef Hamoud, spokesperson of the opposition Syrian National Army, the fighters arrived on Monday on the outskirts of the city of Kafranbel, which was taken by government forces on February 25.

In the east, after the opposition took back the town of Saraqeb and the government lost control over the strategic M5 highway linking Damascus to Aleppo.

The Russian defence ministry said in a statement posted on its Facebook page that it has deployed Russian military police units to the city.

Another opposition commander told Al Jazeera clashes in Saraqeb continue, but rebels were holding their ground with the support of Turkish drones.

On Sunday, Turkey announced it was launching operation Spring Shield targeting Syrian government forces in northwest Syria, but opposition commanders told Al Jazeera the actual offensive started as early as Thursday and intensified after the killing of 34 Turkish soldiers in southern Idlib.

On Saturday, a deadline given by Turkish President Recep Tayyip Erdogan to the Syrian government of President Bashar al-Assad to withdraw from areas it had taken over in northwest Syria since December expired.

Although Turkey has supported the Syrian opposition in its fight against the Syrian government, this is the first time it has deployed UAVs in the battle against Damascus. That along with air raids by fighter jets flying along the Syrian-Turkish border and heavy artillery has changed significantly the dynamics on the ground.

“There are some high grounds and some choke points that can change the overall military balance [such as] Saraqeb, Neirab, Atarib. Turkish drone power can make a tactical difference in these flashpoints of the Syrian [war],” he explained.

According to Kasapoglu, Turkey had previously used armed drones in Syria during its 2018 operation Olive Branch against the Syrian Kurdish People’s Protection Units (YPG).

But this is the first time the Turkish army has used its Turkish-made ANKA-S and Bayraktar-TB2 on such a scale and with such intensity, he said. In his estimate, dozens of UAVs have been deployed.

The drones have not only hit positions and convoys of the Syrian government forces and its allies along the front line, but they have also penetrated deep into Damascus-controlled areas and reportedly targeted military airports near the cities of Aleppo and Hama.

According to Kasapolgu, they also managed to destroy a number of anti-aircraft systems the Syrian government deployed.

Sources told Al Jazeera Arabic that on Saturday at least 10 high-ranking commanders of the Syrian government’s forces and its ally, Hezbollah, were killed by a Turkish drone while meeting near the town of Zerba in southern Aleppo province.

In a separate incident, in the Talhia area near the town of Taftinaz, at least nine Hezbollah fighters were killed along with dozens of others from militias supported by Iran, as well as a number of Syrian soldiers and officers, Lebanese media reported.

Turkey has confirmed the downing of one of its drones. The Syrian news agency SANA reported at least three have been shot down.

Although the Turkish drone power has enabled the Syrian opposition to launch a counter-offensive against the Syrian government and stop its advance, it may not be enough to change significantly the status quo on the ground in northwest Syria.

“Assad lost the psychological advantage after the deployment of the Turkish drones and artillery. The regime forces cannot fight under such fire, which temporarily paralysed them,” said Kirill Semenov, a Moscow-based Middle East analyst. “But it’s unlikely that the opposition will be able to re-capture the positions it lost.”

He expressed doubt about the numbers of casualties and destroyed military assets released by the Turkish ministry and said al-Assad’s losses are “big but not critical”.

One of the factors that seems to have enabled the Turkish drone-led offensive has been Russia’s decreased military activity in the northwest. A Syrian opposition commander confirmed to Al Jazeera that Russian air raids have been relatively few over the past few days.

According to Semenov, Russia and Turkey have an agreement, according to which the Turkish army can use drones over the de-escalation zone in Idlib, which is why Russian forces have avoided taking action against them. It is also possible that Russia wanted to avoid a major escalation with Turkey at this point, he added.

The Turkish government has also been explicit in its public rhetoric, saying it will target only Syrian regime forces and avoid a confrontation with Russia.

Kasapolgu pointed out the Turkish army has focused its artillery and drone power on the front in eastern Idlib, where Syrian government forces and Iranian militias have been fighting; at the same time, the offensive has been less intensive in the south where the Russian-backed Fifth Division has been deployed. The deployment of Russian military police to Saraqeb, however, could force the Turkish army to hold back on its fire.

These developments come as Erdogan and Russian President Vladimir Putin are scheduled to meet in Moscow on March 5 to discuss the situation in Syria. In recent weeks, there have been multiple meetings between Turkish and Russian delegations and phone calls between members of the two governments.

According to Marwan Kabalan, the director of policy analysis at the Arab Centre for Research and Policy in Doha, Qatar, with its latest escalation in Syria, Turkey wants to pressure Russia into a new deal on northwest Syria before the March 5 meeting.

“The Turks are going to the summit with a much stronger position on the ground than they had a few days ago,” he said. “My understanding is that the Russians and the Turks will reach a new deal.”

In his view, Ankara is afraid of the Syrian government taking over the M4 and M5 highways and leaving a small strip of land for the three million displaced Syrians devoid of economic prospects and infrastructure, effectively turning it into “another Gaza” that would have to be financially supported by the Turkish government.

For this reason, Erdogan will likely pressure Putin to agree to a new de-escalation zone and a joint administration of the M4 and M5 highways, Kabalan said. If such agreement is reached, the Turkish offensive will likely subside after March 5, he added. 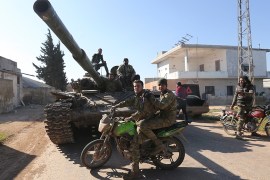 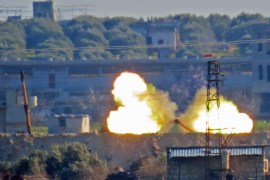 The strategic town of Saraqeb has already changed hands twice in less than a month during heavy fighting.