Iran has issued its most dire warning yet about the new coronavirus outbreak ravaging the country, suggesting “millions” could die in the Islamic Republic if people keep travelling and ignore health advisories.

A state television journalist, who is also a medical doctor, gave the warning on Tuesday citing a study by Tehran’s prestigious Sharif University of Technology, which offered three scenarios regarding the COVID-19 outbreak in Iran, one of the deadliest outside China, where the illness originated.

On Tuesday, 135 new coronavirus deaths took the country’s overall toll to 988, as it curtailed celebrations for a fire festival in a bid to contain the disease.

But if people fail to follow any guidance, it could collapse Iran’s already-strained medical system, Eslami said. If the “medical facilities are not sufficient, there will be four million cases, and 3.5 million people will die,” she said.

Eslami did not elaborate what metrics the study used, but reporting it on Iran’s tightly controlled state TV represented a major change for a country whose officials had for days denied the severity of the crisis.

Iran has been scrambling to contain the rapid spread of the coronavirus which so far has infected some 16,000, including 1,178 new confirmed cases in the past 24 hours, according to the health ministry.

It came as the public ignored repeated warnings and pleas from security forces. Iran has been urging people to stay home, but many have ignored the call.

Crowds typically pray there 24 hours a day, seven days a week, touching and kissing the shrine. That has worried health officials, who for weeks ordered Iran’s Shia clergy to close them.

On Monday, the state TV had announced the shrines’ closure, sparking the demonstrations.

Police later dispersed the crowds, state media reported. Religious authorities and a prominent Qom seminary called the demonstration an “insult” to the shrine in a statement, urging the faithful to rely on “wisdom and patience” amid the closure.

Iran’s shrines draw Shias from all over the Middle East for pilgrimages, likely contributing to the spread of the virus across the region. Saudi Arabia earlier closed off Islam’s holiest sites over fear of the virus spreading.

In its latest attempt to contain the virus, Iranian police banned celebrations marking the traditional fire festival that comes before Nowruz – the Persian New Year.

However, since it announced its first two deaths in the holy city of Qom last month, Iran has yet to impose any lockdowns and the outbreak has spread to all 31 of the country’s provinces.

State TV reported that Iran had deployed teams to screen travellers leaving major cities in 13 provinces, including the capital, Tehran.

The teams will check travellers’ temperatures and send those with fever to quarantine centres.

Apparently, in a bid to curb the spread of the virus, Iran released 85,000 prisoners on temporary leave, judiciary spokesman Gholamhossein Esmaili said on Tuesday. He said that the order included half of all “security-related” prisoners, without elaborating.

Among those released is Mohammad Hossein Karroubi, son of opposition leader Mehdi Karroubi, who was in jail for nearly two months.

According to the health ministry, the trend of rising reported infections is due to the increasing number of tests being carried out.

Roughly nine out of 10 of the more than 18,000 cases of the new virus confirmed across the Middle East have come from Iran. 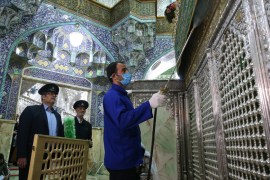