At least three US-led coalition soldiers have been killed after multiple rockets hit an Iraqi base housing US and coalition troops on Wednesday, according to a statement by Operation Inherent Resolve.

The statement added that at least 12 more soldiers were injured during the attack, which is “under investigation by the coalition and Iraqi security forces”.

In a statement released on Thursday, Iraqi President Barham Salih condemned the attack and pledged to investigate and hold accountable those responsible.

A “number of coalition consultants and trainers within the international coalition operating in Iraq” were killed in the attack, the statement read.

An assessment of the incident is under way, a senior official from the administration of US President Donald Trump said.

“We are closely following the situation at Camp Taji,” the official said on Wednesday. “We are not going to get ahead of the assessment and investigation, which are ongoing.” 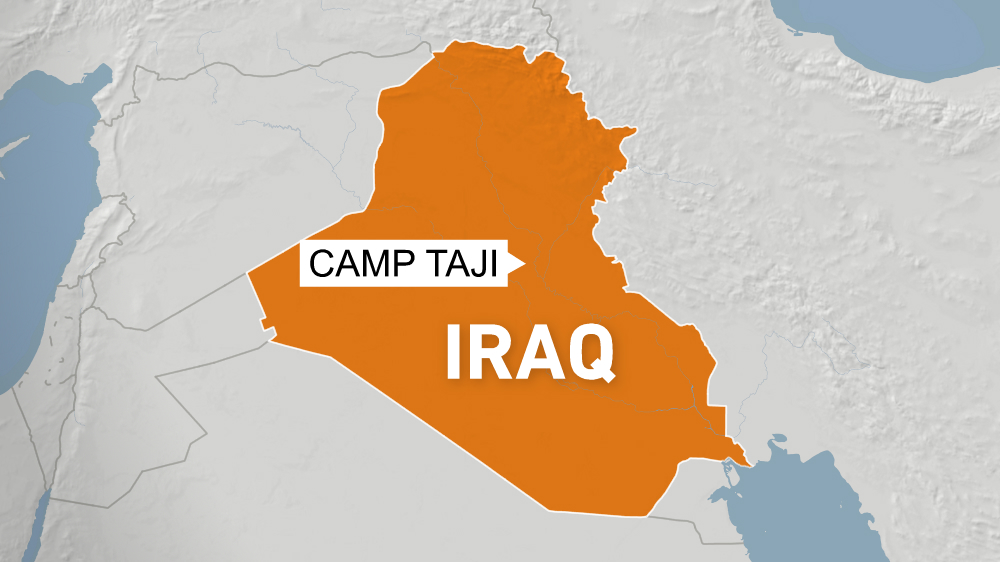 The rocket attack was the 22nd against US military interests in the country since late October, an Iraqi military commander said.

US Army Colonel Myles Caggins, a US military spokesman in Iraq, said on Twitter more than 15 small rockets hit the base, but provided no further details.

US Secretary of State Mike Pompeo and Britain’s Foreign Secretary Dominic Raab vowed to hold “accountable” the people behind the attack.

In a phone conversation late on Wednesday, the pair “underscored that those responsible for the attacks must be held accountable,” the US State Department said.

Camp Taji, located just north of Baghdad, has been used as a training base for a number of years. There are as many as 6,000 US troops in Iraq, training and advising Iraqi forces and conducting counterterrorism missions.

Previous rocket attacks targeting US soldiers, diplomats and facilities in Iraq killed one US contractor and an Iraqi soldier. None of the attacks has been claimed, but Washington accuses pro-Iran factions of being responsible.

Two days after the death of an American in rockets fired on an Iraqi military base in Kirkuk at the end of last year, the US army hit five bases in Iraq and Syria used by the pro-Iran Iraqi armed faction Kataib Hezbollah.

Kataib Hezbollah was designated a “foreign terrorist organization” by the US Department of State in 2009.

Tensions rose further between Washington and Tehran after a US drone strike killed the powerful Iranian military commander Qassem Soleimani and Abu Mahdi al-Muhandis, head of Kataib Hezbollah, in Baghdad on January 3.

The assassination brought tensions between the two countries almost to the breaking point.

The US leads an international coalition – comprising dozens of countries and thousands of soldiers – formed in 2014 to confront the armed group ISIL (ISIS).

While ISIL has lost the vast territory it once held in Iraq and Syria, sleeper cells remain capable of carrying out attacks.

The Iraqi parliament voted to expel all foreign soldiers from the country in the wake of the killing of Soleimani, a decision that has still not been acted on by the government.

The outgoing government, which resigned in December in the face of mass protests, has yet to be replaced because of a lack of agreement in Parliament – one of the most divided in Iraq’s recent history.