Turkish Foreign Minister Mevlut Cavusoglu has said a 2016 refugee deal between Turkey and the European Union needs to be updated, expressing Ankara’s hopes to reach a new agreement in time for a summit of the bloc’s leaders later this month.

In an interview with state-run Anadolu news agency, Cavusoglu said on Tuesday Turkey was ready “for constructive work” on the issue, taking into account developments in neighbouring Syria where a government-led offensive has forced nearly a million people to flee towards the Turkish border.

“If we reach an agreement by March 26 when there will be an EU leaders’ summit, this issue will come on to the agenda of this meeting,” Cavusoglu said.

He spoke a day after Turkish President Recep Tayyip Erdogan left meetings in Brussels with EU and NATO leaders without issuing a joint statement or appearing at a joint news conference, as had been expected.

Erdogan’s trip came as tens of thousands of asylum-seekers have been trying to break through the land border between Turkey and Greece for days after Ankara announced it would no longer prevent people from trying to cross into the EU amid risk of new arrivals from Syria.

Turkey, which hosts approximately four million mostly Syrian refugees, has repeatedly railed against what it describes as unfair burden-sharing following a 2016 deal with the bloc to halt the influx of refugees into Europe.

In March 2016, Turkey and the EU agreed upon a deal in which Brussels would provide billions of euros in aid to help Ankara finance housing, schools and medical centres for the refugees it hosts on its soil.

But Ankara has repeatedly accused the bloc of not fulfilling its commitments under the deal, including visa-free travel for Turkish citizens and an enhanced customs union.

“If we are to come up with a road map with the EU, we expect them to be sincere,” Cavusoglu said.

“It is not only about keeping migrants in return for more money,” he added, noting that EU visa liberalisation and an update of the country’s customs union with the bloc must be implemented to help solve the refugee issue.

While the land crossing on the Turkish side of the border with Greece remains open, Erdogan on Friday ordered Turkey’s coastguard to prevent risky Aegean Sea crossings after hundreds of refugees and migrants landed on Lesbos and four other Greek islands over the past week.

Turkey and Russia back opposing sides in Syria’s long-running conflict but last week agreed to a ceasefire in the country’s northwest after Ankara launched an offensive against Damascus following the deaths of dozens of Turkish soldiers in recent attacks.

Cavusoglu said on Tuesday that, as part of the ceasefire deal, Turkey’s military will patrol to the north of a security corridor being set up around a strategic highway in Idlib and Russian forces will patrol the southern side.

A Russian military delegation arrived in Ankara on Tuesday for talks on details of the accord, Cavusoglu said.

Under the agreement, joint Turkish-Russian patrols were to begin along the highway itself on March 15. It was not clear what would happen to the pocket of rebels which it will create to the south of the highway. Cavusoglu said Russia would ensure that Syrian government forces do not try to enter the corridor along the M4 and that Turkey-backed rebels would remain in place.

He also said there had been a small violation of the ceasefire by Syrian government forces on Monday and that the Russians had sent them a strong warning. 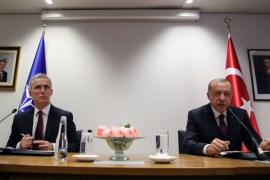 Turkish president in Brussels for talks with EU and NATO leaders after tensions at Greek border over fate of refugees. 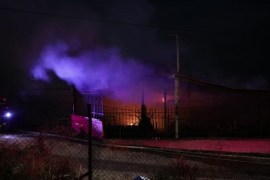 Blaze at refugee centre on Lesbos amid tense standoff between Turkey and EU over responsibility for migrants.